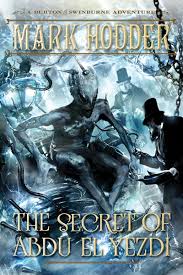 There are a lot of awards being handed out now, but the Hugos won’t be awarded until August. There is another award, however, that my alternate history obsessed mind is more interested in and that is the Sidewise Award. Every year at Worldcon the Sidewise Awards are handed out to the best short and long-form alternate history fiction published in the previous year. Since I started blogging full time in 2011, I have tried to read and post a review of all the Sidewise nominees before the winners are announced, but I have never really had my heart into it. This year it will be different and I begin my coverage with The Secret of Abdu El Yezdi by Mark Hodder, the fourth Burton & Swinburne adventure.

The story is told from the perspective of famous explorer Sir Richard Francis Burton. Except this isn’t the Burton we know. This is the Burton who lives in a timeline where Queen Victoria was assassinated in 1840 and the world has experienced a stunning period of technological growth. While returning home from discovering the source of the Nile, one of Burton’s friends is murdered under his nose in an attempt at summing something called “The Beast”. Things become stranger when Burton is tasked by the king himself to track down Abdu El Yezdi, the spirit of a dead mystic who has been advising the British Empire since the assassination, but has suddenly gone silent. All this is set against the backdrop of numerous disappearances of famous scientists and the creation of a “Central German Confederation” that will unite Germany through British sponsorship, thus weakening the power of Prussia. As Burton dives into the mystery, he gains new allies, including an eccentric, ginger poet with a fetish for flagellation.

I always had a certain affinity for Burton especially after reading historical accounts of his exploits and seeing adaptations of him in works like Farmer’s Riverworld series. Hodder’s version of him is quite different from the historical Burton I read about. For example, the Burton in The Secret of Abdu El Yezdi is an athiest who is nevertheless deeply in love with his Catholic fiance Isabel Arundell. One of the biographies I read, however, suggested that the main reason Burton was successfully able to enter Mecca while pretending to be a devout Muslim is that he was never pretending. He actually was a devout Muslim on a pilgrimage, but he kept his true beliefs secret from the English. Also his relationship with his wife Isabel is considered by the same biographer to be rather one-sided affair, with Isabel worshiping the famous Victorian and Burton being rather indifferent toward her. 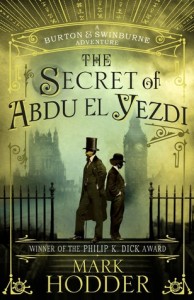 Of course, this is an alternate history. The Burton in this book isn’t the same Burton from our history. In fact he is not even the same Burton from the first three books if that makes any sense. The Secret of Abdu El Yezdi can be considered a reboot of the entire steampunk series by putting the characters into a completely different history (although not having read the first three I can’t really confirm this). There is a lot of philosophizing about time travel and the multiverse if you are into that sort of thing, along with the usual steampunk tropes like airships, clockwork robots, etc. There is also plenty of references to Victorian fiction such as Dracula and Sherlock Holmes. To be honest those two literary works are referenced way too often in steampunk fiction. I am not picking only on Hodder here when I say there are other works of Victorian literature guys!

Nevertheless despite that nitpick, I found The Secret of Abdu El Yezdi to be an enjoyable, east to read adventure/mystery. The dialogue is well-writen and there are lot of twists and turns, although some are handled better than others (you should be able to guess the “secret” long before the big reveal). The technological growth, even for a steampunk story, still seems quite implausible, but I think it can be forgiven for its large, but interesting, cast of obscure Victorian characters. Will The Secret of Abdu El Yezdi win the long-form Sidewise Award this year? It will be hard pressed especially since I know at least on judgewho doesn’t consider steampunk to be “real” alternate history, but regardless I still think I can recommend the novel for your reading pleasure. The best thing is, you don’t have to catch up with the entire series to avoid getting lost when you begin The Secret of Abdu El Yezdi.