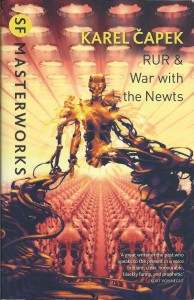 Born in 1890, this author was one of the most creative minds in early twentieth-century fiction and one who became a huge influence on later writers. Today he is most famous for his tales of mysterious creatures who emerge from the sea to perform abhorrent rites by moonlight. Hidden from our eyes for centuries, only a few explorers encounter these amphibious monsters before the true magnitude of their threat to humanity is revealed. Dying just before the Second World War, his stories continue to dazzle and surprise readers right to the present day.

It could be H.P.Lovecraft (1890-1937), but this description is also true of his exact contemporary Karel Čapek (1890-1938). The two men lived surprisingly parallel lives, although Lovecraft remained rather obscure in his lifetime, while the Czech author Čapek was one of the literary stars of his day.

Čapek wrote journalism, novels and plays and it is one of his works for the theatre on which his claim to fame in the English-speaking world resides. In the 1920 play RUR, Čapek introduced the word ‘robot’ to the English language, some seven years before Fritz Lang’s Metropolis. Originally, ‘robot’ only meant a type of serf working for Czech landowners. Indeed, the robots created in factories in RUR are actually more organic than electronic.

In each one we mix the ingredients for a thousand Robots at one operation. Then there are the vats for the preparation of liver, brains, and so on. Then you will see the bone factory.

RUR is still entertaining to read (and perhaps to perform) because Čapek has something which H.P. Lovecraft sorely lacked: a comic touch.

Domin: What sort of worker do you think is the best from a practical point of view?

Helena: Perhaps the one who is honest and hardworking.

Domin: No; the one that is the cheapest. The one whose requirements are the smallest.

The cover of the SF Masterworks edition makes it look like RUR is set in a proto-Asimov world of machines. In fact, the play is so old that it feels more like steampunk than hard-core SF. The same is true of Čapek’s masterpiece, War with the Newts, which appeared ten years later in 1930.

War of the Newts is a complex, witty, intelligent and gripping read. Its scale is enormous, taking place over decades. It begins when people slowly discover a semi-intelligent species of salamanders living on a remote island. A drunken but kindly sea captain makes contact with the newts and befriends them. Slowly, the news about these extraordinary animals spreads around the world. The placid and friendly newts become fairground exhibits, victims of vivisection, objects of commerce and slaves on massive construction projects. One of these projects is due to the limited range of contemporary aircraft: the newts build chains of artificial islands to provide stopping points on intercontinental flights.

Like all the best SF writers, Čapek is not really writing about monsters but about his own times, and he uses the newts to hold up a mirror to human greed and cruelty. War of the Newts is written as though pieced together from many disparate documents, including news clippings, which can be gripping in their immediacy:

Those swine shot us in the back; Bodkin turned round and got one in the belly; he only said “but no,” and fell. So we tried again to get back into the interior of the island; we had already broken our oars and clubs on the brutes, and so we just ran like hares. There were only four of us left. We were scared of going further from the shore in case we should not get back to the boat; we hid behind the stones and bushes, and we couldn’t help seeing how the newts finished off our comrades. They drowned them in the river like kittens, and when any tried to swim they gave him a whack with a crowbar. I only realized then that my leg was put out, and that I couldn’t go any further.

There are other moments which are laugh-out-loud hilarious, especially when the newts start learning to speak using tabloid newspapers.

War of the Newts is an extraordinary example of a fake social history, covering a vast swathe of disciplines, such as politics, history, law and sociology. Characters change and adapt as the roles of the newts take on new colours with every new task they are given. The world itself is in flux. We as readers are horribly aware of the oncoming tragedy even as the world’s leaders squabble about whether or not they should be giving apples to their unpaid labourers.

With RUR and War of the Newts included in a single volume from Orion Books, and complemented by a handy introduction by Adam Roberts, this is a highly-recommended introduction to one of the world’s finest authors of SF, whose ideas remain fresh and relevant today.