Hi all. This week I had the opportunity to share a correspondence with author & editor (Apex Magazine) Jason Sizemore. He’s just released a new collection of short fiction which is truly remarkable (can read my review here). So naturally, I had questions. Gracefully, he had answers. Here they are: 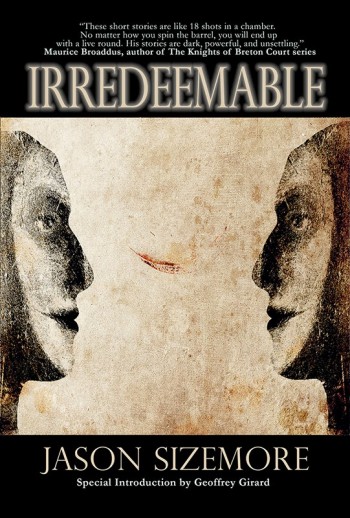 James Weber for Amazing Stories: We’re here to talk about your new collection, Irredeemable. Anything you’d like to speak about before we begin? (Maybe introduce yourself a little?)

Jason Sizemore: While plenty of folks in the publishing business know me as an editor and publisher, I’m certain my name will be unknown to most readers. I own and operate Apex Publications. Perhaps most famously, I publish and help edit the Hugo Award-nominated Apex Magazine.

I live in Lexington, KY, and grew up in a small Appalachian community named Big Creek (population 400). I like to joke that I’m a hillbilly…but the fact is the joke is the truth!

ASM: Awesome. Well there are 18 wildly different stories within the anthology, what were some of the challenges when putting it all together? What was the selection process? Any similarities to your work for Apex Magazine?

JS: So many of my stories are dark and deal with the less pleasant aspects of humanity and technology, that it was a challenge to keep the collection from being a total bummer of a read. So that’s why you’ll find a couple of less serious pieces such as “Plug and Play” and “City Hall” that are darkly humorous.

ASM: Geoffrey Girard wrote the introduction for Irredeemable in which he talks about the Southern Gothic. What is Southern Gothic? Do you think it is a fair description of your writing style?

JS: Going by memory, resisting the urge to use Wikipedia, I’ll give you my description of Southern Gothic. Dark fiction set in the American South that deals with issues such as poverty, violence, supernatural incidents, and so on. Most of my stories contain several of these elements, so I think Geoff was spot on.

ASM: Of course, I have to ask about your influences. Again, the introduction mentions film. Do you have any favorites that have made it into the anthology in some way? How about literature?

The film Silent Running was a major influence for Mr. Templar. The Shining (film) was an inspiration for The Sleeping Quartet.

Mary Doria Russell’s novel The Sparrow can be felt (I hope) in Yellow Warblers. I was trying to channel the style of Russian fantasy employed by Sergei Lukyanenko (Night Watch series) in For the Sake of Pleasing.

ASM: Wow. I’m glad you mentioned Mr. Templar as it was probably my favorite story within the anthology followed closely by Plug and Play. Can you tell us anything about the inspiration for those two stories specifically? Do you have a favorite piece?

JS: I have a soft spot for stories about robots and androids and their roles in our lives in a future setting. It crushed me at the end of Silent Running when Bruce Dern’s character has to deactivate his two little robot helpers at the end of the moving. The movie A.I. always gets me in the heart each time I watch it. I was tapping deep into those wells of emotion when drafting the plot of Mr. Templar.

With Plug and Play, I was channeling my inner Douglas Adams. I’m proud of that story because I think I was able to attain a small fraction of Adams fun mix of tomfoolery and SF.

My favorite story is Mr. Templar. Humans have destroyed the Earth, leaving a handful of pitiful sentient androids and robots crawling the planet, slowly dying. Mr. Templar is searching for his beloved creator and best friend, Doctor Pak. The end of Mr. Templar is heartbreaking.

ASM: Religion seems to play an important role in many of your stories. What does a typical Sunday look like at the Sizemore house?

JS: We don’t attend church. Personally, I’m agnostic despite my upbringing as a frightened Southern Baptist. I had religion scared out of me.

So we sit around in our pajamas and do nothing. Because we’re exciting that way.

ASM: Now that the collection is released, what is your next move? Any new projects you’re working on?

JS: I currently have a big interest in collaborative works. Right now I’m co-writing a story with Sara Price. I’ve got one with Elaine Blose that should be coming out soon. Maurice Broaddus and I are working on a novel together. Good times.

ASM: Finally, Irredeemable is a pretty sophisticated work considering the many themes and ideologies represented throughout its 254 pages. What is one thing you’d like readers to take away from their experience with the anthology?

JS: Thank you! Having your work called sophisticated is nice.

There’s a lot of evil in the world. So be nice to your fellow humans.

ASM: Actually, bonus question. Give us a personal anecdote (serious or otherwise). It can be related to the anthology but it certainly doesn’t have to.

JS: A lot of people ask me if I’m anti-religion after reading Irredeemable. My answer is not at all, but please consider the implications of taking an impressionable eight-year-old to a church that wants you to believe you’re going to burn in a lake of fire for every small sin you commit!

Well, thank you Jason for spending some time with me. I know I had a blast doing this post. Hope you have as well. Readers, please check out Jason Sizemore’s Irredeemable and as always, please comment below. Thanks!