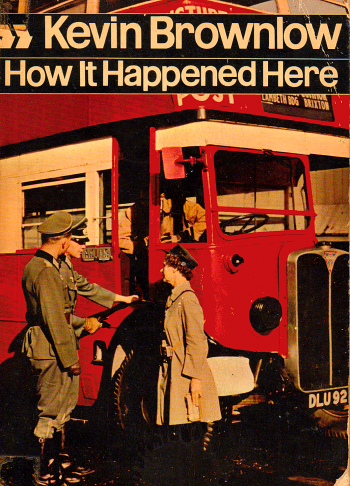 He even looked like a James Bond villain, being described as “short and bald, with ears that stuck out, and [wearing] heavy pebble spectacles that inadequately concealed a pronounced squint…” His doctorate was in philosophy, which he began studying the same year he joined the German Nazi Party.

Turns out this not-so-typical academic scholar was the guy picked to police and pacify Great Britain should it be successfully conquered. Among his responsibilities would be rounding up the 2,300 individuals on the infamous Gestapo ‘Black List,’ people like the elderly and ailing H.G. Wells for instance, allegedly to be executed immediately once in custody (surely not because of his SF writing—more likely due to his Fabian Socialist leanings).

In hindsight, many people assume the Germans were doomed to fail, thus placing the proposed invasion entirely in the realm of fantasy. In truth it was a near run affair. Had the Luftwaffe continued pounding British air bases (instead of switching to cities) RAF air superiority would have been lost, and given the lack of military equipment (because of material left behind in France) the British would have been unable to thwart a German invasion.

In other words, the ‘fantasy’ would have been reality, and any future alternate histories on the matter would have asked the question “What if Great Britain had held out and ultimately won the war with the aid of America and Russia?” Critics in, say, a neutral America, would have probably considered the premise ‘wishful thinking’ at best, and ‘painfully sad’ at worst.

And that’s what fascinates me about alternate history SF. There is nothing inevitable about the real world as we experience it. A simple decision by a single individual (in this case Hitler’s decision to switch targets) can send history hurtling down a whole new path. In that sense ALL futures are pure fantasy, until one of them becomes real. The invasion and conquest of Great Britain could well have become reality, had an alternative path been chosen.

But many alternate histories (and bear in mind I include hypothetical future history as a form of alternate history extrapolating from current trends) fail to seem genuinely ‘real,’ often depending on wildly improbable elements (like an alien invasion) to move the plot along. Films, in particular, normally convey nothing more than ideas. THINGS TO COME, for example, though scripted by H.G. Wells and utterly sincere in its predictions, is really just a special effects extravaganza with nifty models and silly costumes. It lacks a sense of ‘being there.’ The movie FAHRENHEIT 451 is a relatively better glimpse of a potential future, given its low key, almost documentary-like approach, but is perhaps sabotaged by its premise, which is hard to take seriously. Wonderful allegory though.

But one film, IT HAPPENED HERE, is utterly convincing in both premise and presentation. It ‘feels’ real, it ‘looks’ real, so much so that it is considered by many to be dangerous because it brings to life a reality some deluded individuals lust for even today. Normally a Nazi occupation is portrayed as either comedic (reducing the threat to caricature) or adventurous, in that good guys inevitably triumph over the bad guys, which is reassuring. But not this film.

IT HAPPENED HERE portrays a Nazi occupation of Great Britain from the point of view of the occupation forces, of the collaborators, and specifically that of a nurse drawn into collaboration out of a desperate need to survive. The film objectively and coldly reveals the difficult choices facing every British subject under German occupation, drawing on the record of Nazi occupation elsewhere, including the British islands Guernsey and Jersey that were located on the ‘wrong’ side of the channel.

(Note that all of the stills reproduced here are from the film, except one taken on Guernsey during the occupation. Which are the fake occupation images? Which one is real? Answer at bottom.)

It all began in 1956 when an 18 year old British lad, Kevin Brownlow, decided to make an amateur full length movie centred around the concept of Great Britain under German occupation. What would it really have been like? 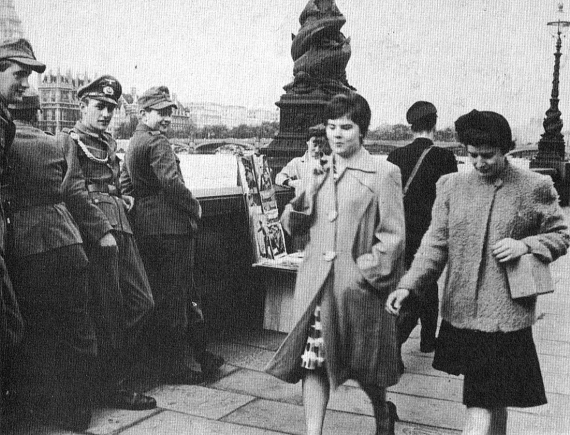 He had already made a short film THE CAPTURE which he shot without a script. He figured a ‘proper’ movie required just a one page treatment. The script could come later, as different scenes were filmed and the need for a script slowly manifested itself. Not working off a script gave him great freedom of action. For four years he visualized and filmed various sequences with only the haziest of concepts in the back of his mind. Then wrote a script with Andrew Mollo, taking advantage of plenty of excellent footage already shot, to complete his vision for the film.

It took eight years to film IT HAPPENED HERE. There were only forty days of filming in total, interspersed with enormous gaps in time due to lack of funding. All the more amazing how superb was the ultimate result.

To briefly summarize the story: district nurse Pauline, played by Pauline Murray, is the sole survivor of a partisan attack on a German convoy evacuating villagers from a region deemed too isolated for effective German control. Shaken, she applies to work as a nurse in London, but is forced to join a Fascist welfare organization, the ‘Immediate Action Organization,’ in order to get the job. Friends of hers turn out to be hiding a wounded partisan fugitive, and she fails to denounce them, indeed tries to help them. They are betrayed. Under suspicion for associating with undesirables, she is transferred to a seemingly idyllic country hospital which hides a horrific secret. On learning the truth, she refuses to work and is arrested by the SS. Falling into partisan hands after her escort is ambushed, she is forced to tend the wounded as the partisans join with American invasion forces in liberating the country. 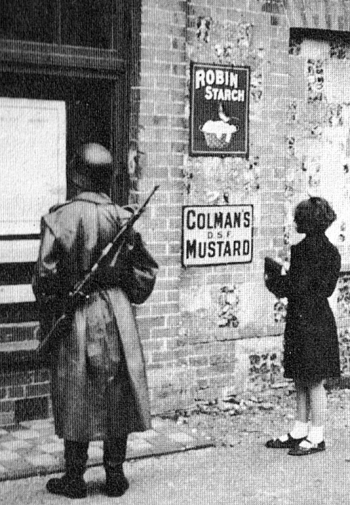 That’s it. There are occasional action sequences, but it is the utterly matter-of-fact mundane scenes of everyday ‘reality’ which generate the impact of the film. This was achieved partly through the use of non-actors, people chosen because they happened to ‘look’ the part:

“When people become camera-conscious, a strange force takes hold of them. Their faces assume expressions of pain. They hold themselves stiffly, uncomfortably. The first task of a director dealing with non-professionals is to break through this barrier of self-consciousness. It can only be done by making the scene seem real to those taking part. When we realized this simple fact, it changed the style of our film.”

NONE of the police and military uniforms in the film are costumes. They are ALL authentic items loaned (and in some cases purchased) from collectors throughout Europe. ALL the weapons are genuine. ALL the vehicles are genuine. Even the civilian clothing is genuine. This produces a visual texture of authentic detail that is absolutely convincing, lending itself to both the documentary approach and the ambient atmosphere of ‘reality’ for those being filmed.

For example, while filming a scene of German troops marching past Big Ben:

“Round the corner, sightseeing on their last day in England, were fourteen officers from a [contemporary] Panzer battalion [training in England]. Hearing the unmistakable strains of the Lippe-Dettmold Marsch, they came into the square to investigate, and were greeted by a column of Wehrmacht infantry. Astounded, the officers inspected our troops, pronouncing them ‘absolutely correct.’ They were so fascinated that they insisted on accompanying us to the rest of our day’s locations.” 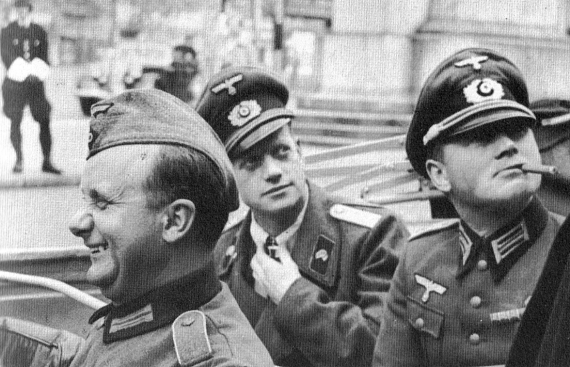 Many of the collectors, being keen on artifacts from the era, were willing to take part in the film. Turns out some of them were genuine Fascists, seemingly normal in appearance, yet utterly besotted with the Nazi creed. Who better to take part in a discussion sequence where fellow members of the ‘Immediate Action Organization’ explain to Pauline why the Jews were responsible for the war and what should be done with them?

The scene is six minutes long. It is unscripted. Pauline asks a few leading questions and the other four participants, genuine right wing fanatics, respond with off the cuff answers so chilling and intensely sinister it was as if they were channeling Hitler himself. The most frightening thing about this sequence is that it has nothing to do with acting or fiction. The British Fascists in the scene believe what they are saying with total sincerity and conviction.

The lesson is that the ‘alternate reality’ depicted in the film in fact exists, at least in part, in OUR reality. It’s nowhere near as fantastical as we would like to think, it’s all too real in the minds of some. Unsurprisingly, many find this disturbing. 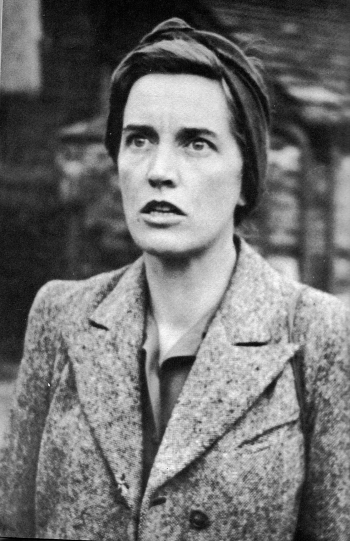 For example, Kevin attended the showing of IT HAPPENED HERE at a film festival in Mannheim Germany, with the following result:

“…throughout the first half of the film, which is full of the atmosphere of the occupation, the Germans responded well. They laughed at esoterica which only they would understand. But when political discussion began, the atmosphere changed to one of smouldering hostility. The Germans were accustomed to war melodramas, which portrayed them as sadistic beasts. They could feel purged, knowing that they themselves were nothing like THAT. But the discussion scene was too near the knuckle. Here were Nazis talking just as THEY had talked, behaving just as THEY had behaved. It was too close for comfort.”

The biggest fear aroused among some critics was that weak-minded people might be seduced into accepting the notions voiced in the discussion scene, might be attracted to the message, the spirit, the soul of anti-Semitism.

In other words, because the film realistically portrays the mentality and twisted logic of the Nazis, it was feared some idiots might enthusiastically accept the film as pro-Nazi propaganda supporting their current worldview. For this reason much of the critical reception of the film was explosively hostile, even though the intended purpose of the film was to expose the evil seductiveness of Fascism, not promote it, the problem being that truth about evil is sometimes embraced by those who ARE evil as justification and reward.

For me the most disturbing scene takes place at the country hospital. Pauline cheerfully injects newly arrived foreign worker families to sedate them so they can rest comfortably, then looks in on them in the morning, They’re gone. Turns out the injections were lethal. This ‘fictional’ hospital is based on an actual euthanasia hospital that used to welcome foreign families with every kindness, even toys for kids, giving them lethal injections, and burying them next morning in a mass grave out back while the ‘nurses’ made the beds ready for the next batch to arrive. Pure evil. 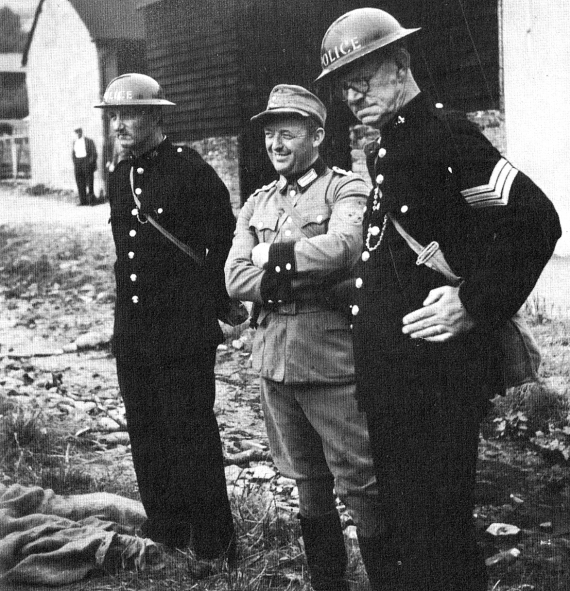 Or consider the photo of the German NCO standing, arms crossed and smiling, between two ‘special’ British Police. A tourist snap shot? Not exactly. Look on the ground to their left. The legs of one of the people they just murdered. The trio is posing for a ‘trophy shot,’ a ubiquitous type of photo often found in the wallets of dead or captured German soldiers. Seems they used to collect and trade them the way kids used to trade bubblegum cards. An example of the film’s often subtle yet telling attention to detail.

If you think TRIUMPH OF THE WILL is a ‘feel good’ film, you’re going to love IT HAPPENED HERE. It’s the equivalent of a wonderful family film (like THE SOUND OF MUSIC, or MARY POPPINS) if your family happens to be a bunch of Nazis.

And yet, and yet… through the vehicle of alternate history it remains what I consider to be the best revelation ever filmed of what the Nazi mindset was (and is). A stunning film. 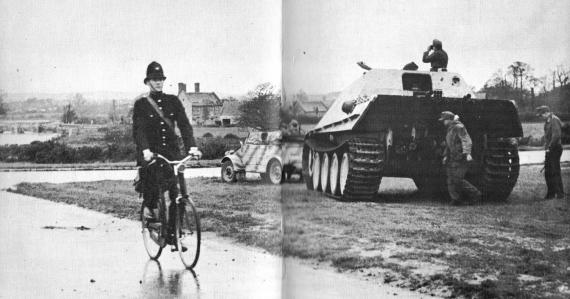