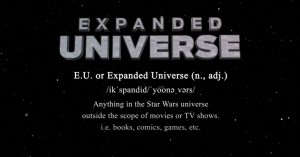 A long time ago in a publishing galaxy far, far away (well, America), before anyone ever imagined George Lucas would ever get around to making more than the original three Star Wars films, assorted novels, comics and video games were spun off from the epic space opera saga. Over time these spinoffs built a vast additional world of storytelling around the core of Star Wars, The Empire Strikes Back and Return of the Jedi. Eventually someone thought to give all these additional adventures a name, and so was born the Star Wars Expanded Universe.

All was well until Lucas sold Star Wars to Disney and they set about making the long discussed, never actually expected, Star Wars films 7-9, a trilogy of sequels set 30 years after the end of Return of the Jedi. There was a small problem. The Expanded Universe had already offered assorted sequels imagining what happened to Luke, Leia, Han et al. after the end of Return of the Jedi. And all this material was Lucasfilm approved and canonical. So the problem was, if the new films followed this canon then everyone who so much as glanced at the internet would know the story before a foot of film was shot. Not just the fans who read the Star Wars books and comics and play the games, but everyone, the mass audience who make blockbuster movies take a billion dollars theatrically, and as much again on sell-through, VOD and network sales. And that wouldn’t be good for business.

So in an ingenious have-cake/eat-cake move Disney and Lucasfilm have announced that ‘In order to give maximum creative freedom to the filmmakers and also preserve an element of surprise and discovery for the audience, Star Wars Episodes VII-IX will not tell the same story told in the post-Return of the Jedi Expanded Universe.’ You can read the entire press release here.

But this does not mean that all the Expanded Universe material produced over the last 30 years will go to waste. The books will still remain in print under a new Star Wars Legends banner, presumably to be considered an alternative, or ‘fictional’ version of what happened next. Yet, and here is the ingenious bit, alongside the new films there is to be a new Expanded Universe, and its creators are free to incorporate any bits of the old Expanded Universe they find useful and which does not contradict the new ‘Unified Canon’. (This ‘Unified Canon’ currently consists of the two cinema film trilogies and the television series, Star Wars: The Clone Wars), about which Lucasfilm says, ‘These stories are the immovable objects of Star Wars history, the characters and events to which all other tales must align.’ The 1978 Holiday Special isn’t mentioned.

Though who knows why at this late stage anyone involved is bothered by canonical inconsistencies; an entire book could be written (and probably has) about the ways the prequel trilogy contradicted the canon established by original trilogy. Or what about George Lucas’ decision to make everyone one big unhappy family, turning a rip-roaring WW2 in space adventure into a dysfunctional family soap opera, retrospectively casting a most unwholesome light over a once sweet and innocent teenage love story?

One of the first new Expanded Universe products is a TV series called Star Wars Rebels. Lucasfilm explains, ‘While the universe that readers knew is changing, it is not being discarded. Creators of new Star Wars entertainment have full access to the rich content of the Expanded Universe. For example, elements of the EU are included intar Wars Rebels. The Inquisitor, the Imperial Security Bureau, and Sienar Fleet Systems are story elements in the new animated series, and all these ideas find their origins in roleplaying game material published in the 1980s.’

Which really is an ingenious way to write yourself out of a hole and still makes lots of money out of material which no longer quite makes the cut. If Lucasfilm and Disney, and franchise obsessed Hollywood in general, put as much thought into new screenplays as into lucrative recycling schemes we might get some films worth watching. But what do you think? Do you care about the ‘Unified Canon’ or Expanded Universe, old or new? Or is it time for science fiction to finally move on and put the whole thing down the garbage disposal shoot into the trash compactor?

Setting the Tone for Superhero Movies