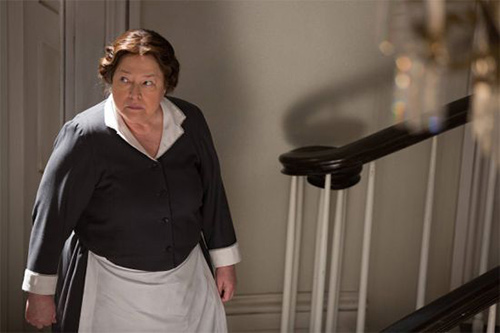 I’m not entirely sure how to process Coven‘s take on race—I’m a straight white male in America, part of perhaps the most privileged class of people in the history of the world—but I know it makes me uneasy, uncertain about whether it’s subversive, insightful, tone deaf, or edging towards racist. My life experience, my history of only perceiving the world through my white lens, makes it hard to imagine what watching the show as a black person might be like (though I’d be awfully curious to hear; the comments are available below, folks). But my guess is that, at best, it feels conflicted.

Take this most recent episode: “Protect the Coven.” A pretty generic title for an episode whose theme, in part, is that Delphine Lalaurie finds her purpose and joy in life by torturing black people.

The episode opens with Madame LaLaurie and her family moving to New Orleans in 1830. The move has been forced by her husband and she’s frustrated, unsettled, by the change. “I need inspiration,” she complains. She soon enough finds it when one of her slaves injures himself and, rather than tending to his wound, she slips her hand into the gash in his leg, probing his wet red insides in an revelatory trance. Moved by the experience, she knocks him out, binds him, and embarks upon her career of torture.

In the present, LaLaurie pantomimes through the motions of her daily tasks as a servant as Miss Robichaux’s: flushing Madison’s poop, cooking for and feeding the witches, watching Fiona prepare for her trysts with the Axeman. But she feels out of place, uncomfortable, unable to feel that she’s found a place where she fits. She muses that—and I’m paraphrasing here—she needs to get her groove back (which is ironic, perhaps intentionally, given that Angela Bassett, who plays Marie Leveau, was the titular Stella in that other work about a woman reclaiming her verve). She needs something to reinvigorate her. She finds it, as she did 180 years before, in torturing a black man—this time a worker at the school who’s injured himself. After binding him, she snips off his toes with garden shears. With blood once again coursing over of her hands, LaLaurie is reenergized, again whole in herself and ready to face the challenges before her.

Let’s think about that for a second: a character on Coven has lacked a purpose, felt unlike herself, and she finds meaning in racist torture. She’s found “a purpose, or at least a hobby,” she says. LaLaurie, no question, is evil. A historic evil spanning decades and centuries. But Coven‘s presentation of her seems no worse than anyone else. The other characters on the show murder on a whim, sink axes into the backs of men’s heads, kill a bus full of people, construct new lives from spare body parts, smother their children, have sex with their children. There’s no one innocent or good on this show; people are only dark, only evil. So can we construe what she does as worse than that? Amidst all the depravity and violence, her behavior registers as just another kind of evil, but nothing unusually worthy of condemnation. And if Coven doesn’t feel that her racist torture is really worse than anything else, what does that tell us? That, at best, the show believes that shock itself is a great virtue?

AHS: Coven has depicted a surprising amount of torture this season, particularly torture by white people imposed on black people. There’s been more racially driven mutilation, presented unflinchingly, than in any other TV show or movie I can recall seeing (though not more upsetting—there are more upsetting works about racist violence, no doubt). Imagine, though, if the roles were reversed. Can we even conceive of that? Can we imagine a series in which a black character, Marie Leveau perhaps, spends so much time, in such explicit and fleshy detail, torturing white people? Can we imagine the shock it would provoke, the incendiary nature of its racial dynamics? Would it even be permitted on TV? If not, how can Coven, and by extension us as its audience, feel comfortable residing in this privilege and punching so hard, so far, down?