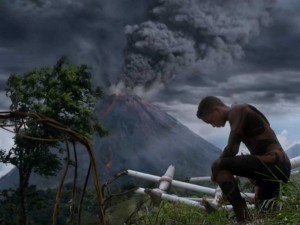 After Earth follows Cypher (Will Smith) and his son Kitai (Jaden Smith) as their spaceship crash lands on Earth. “What’s wrong with that?” I hear you ask. Well Earth is no longer inhabited by humans following aliens coming in and attacking everyone. Not any aliens. Blind aliens. Blind aliens that detect pheromones that humans release when they are scared. Only humans that can stop themselves being scared, or ghosting, can survive these aliens and Cypher happens to be the best in the business.

If you’re expecting a Will Smith action film you can think again with this. He spends the entire film injured in a crashed spaceship while he directs his son (played by his real son) to the tail of their ship to set off a beacon so they can be rescued. Jaden’s acting isn’t all that to start off with, he actually seems a bit better when his character is under pressure then in straight forward interaction with his dad.

The film is a little predictable. Kitai is a scardy-cat and we wonder how is he going to make it to set off the beacon. He has to take an inhaler of sorts to help him breathe since Earth’s atmosphere has changed. He has just enough inhalers to get him to the tail of the ship but a couple of them break so he is short. He finds a quicker way to where he needs to be but loses contact with his dad. He gets to the tail and the beacon doesn’t work, luckily he know’s exactly what his dad is thinking. The volcano is affecting the beacon so he needs to climb up it to get a better signal. There was an alien on the tail of the spaceship and it has escaped and is hot on his tail. So not only does he have to climb a volcano to set off the beacon and save his and his dad’s life, he also needs to get rid of his fears and ghost so he can fight and destroy the alien.

Visually, the film looks amazing. And it’s quite interesting to see a sci-fi film that follows a kid saving the day, but I could have done with a little more action and a few more plot holes that weren’t predictable.