Graeme shares the experience of watching 2001 A Space Odyssey during its original release and ruminates on the films impact then and today.

Huge hit, smashing all previous movie records. The manager of the Glendale thought it could run a “full year”. It was certainly a huge hit with me. 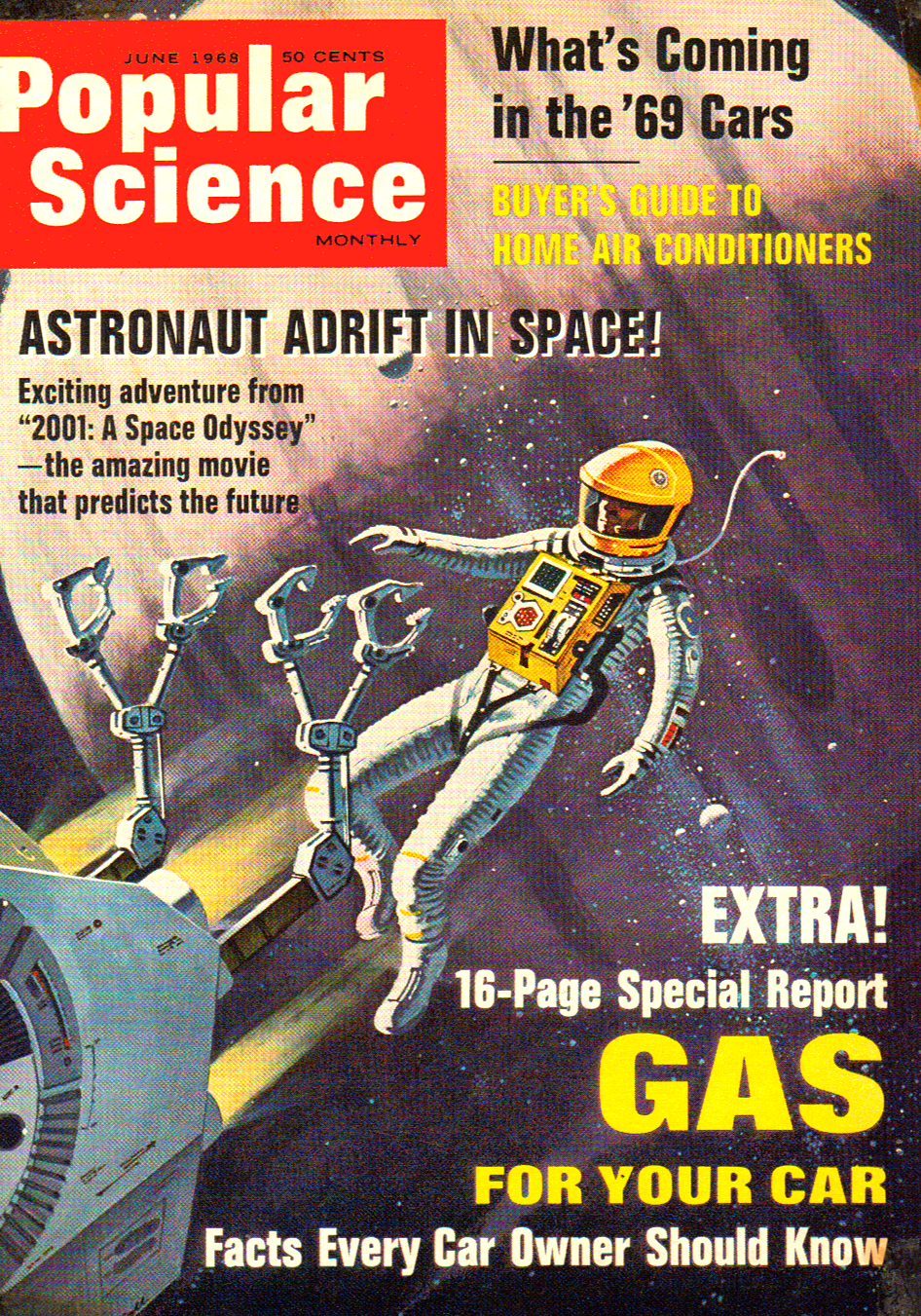 Though I was a 16 year old teenager I didn’t mind the presence of my parents. I was keen to find out what my father, a Royal Canadian Air Force pilot and military engineer, thought of the space technology displayed in the film. My dad regarded my passion for science fiction (and indeed, literature in general) as a waste of time, a betrayal of the “real world”, and this could well be my one and only chance to prove to him there was something worthwhile to SF after all.

Certainly Kubrick and Clarke put a lot of thought into it:

They decided to use the year 2001 because it is within the measurable future and scientists have a fair idea of what the world might be like then.”

Automatic letter writer; “you dictate at one end and it writes out the letter at the other.”

30 nations will have nuclear weapons.

Cancer no longer a general killer.

Man is farming the oceans.

Immediate sleep cuts down the hours of sleep to 2 or 3 a night.

Facsimiles of the front pages of foreign newspapers are available at the touch of a switch.

The first and last have come to pass (more or less). Thank Ghu the second one didn’t. Or the second from last for that matter.

What made the film unique was the beautiful and credible realism of the spacecraft and associated technology. Outfits as diverse as Honeywell and NASA were consulted.

These space vehicles will influence designers of real ships for years to come,” claimed Clarke.

Turned out my dad really enjoyed the eye-candy tech:

Yeah, I can see governments funding the spacecraft, all done by the lowest bidder to the cheapest design, but they won’t pay for a hotel, or for moon bases as big and complex as the one we saw on screen. That stuff won’t happen till private industry can afford to turn a profit. 2201 at the earliest. Sure looked pretty though. And practical. Might even work.”

I was very pleased my dad approved, though a bit miffed he put it off for another couple of centuries. I was even more miffed that he didn’t buy the ‘hold-your-breath-and-survive-the-vacuum” skit.

Been in the Air Force for forty years. I know a thing or two. Won’t work.”

But Dad! Chimpanzees survived the experiments!”

Good for them. You and I wouldn’t. Instant bends and worse. Spoiled the whole film if you ask me.”

DAD spoiled the whole film, with his nit-picky ways, but only briefly. I drifted home on a cloud, eagerly dreaming of things to come. Little did I know Kubrick was already apologizing for the ‘advanced’ technology at his news conferences:

Kubrick does not think he has to stay ahead of reality, that events will date his film.”

True, but not in the sense he meant (as he and Clarke often explained) that the future will surpass the technology shown in the film. Sadly, no.

It’s 2014, people! Yes, we have a space station, but it isn’t a Hilton hotel. There are still no lunar bases. And we don’t even have the capability to travel to Mars, let alone Jupiter. We’re behind schedule!

Kubrick and Clarke thought they were being conservative and pessimistic in the level of technology they chose. Boy were they wrong!

Something else made the film unique. The fact that many people couldn’t figure out why it bored the pants off them.

The way people are talking about this movie… is bound to convince you that it’s a monstrous hoax or a terrible drag…. Some are convinced that they have been had, that Space Odyssey is a $9,000,000 fraud – a lot of sound and fury and Cinerama pyrotechnics that adds up to nothing…”

Hence Forrest J. Ackerman’s comment overheard during the 15 minute intermission at the premiere:

Something better happen in the second half or they’re in trouble.”

But Knelman had an explanation for the lack of the usual:

If you are of so abstract and intellectual a bent that you are not interested in the look and feel and taste of things, you will hate it… The whole point of most of the movie is to give us a sense of the feel of the crew’s environment… All Kubrick requires of his audience is enough curiosity about the details of the immediate sense experience, about how things work, to be willing to forget about plot development in the usual way.”

Up to a point that is. Knelman explains how Kubrick approached the cutting edge but managed to avoid slicing the viewer’s jugular:

At just the crucial point where even the most indulgent of us might get fidgety, might grumpily tell Kubrick to stop messing about and get on with it, he provided an amusing episode involving computer HAL 9000, and it’s a sideshow that holds the movie together. Hal is easily the most engaging character in the film.”

Says something right there about one of the themes of the movie, that man will increasingly come to resemble his soulless technology and yet, paradoxically, become less human than what his computers are becoming.

This puts me in mind of the famous speech Philip K. Dick delivered at VCON 2 in 1972, the one titled “The Android and the Human” in which he argued that, instead of studying machines to gain insight into human behavior as contemporary scientists were wont to do, why not study humans to gain insight into machine behavior? This in order to understand the relationship between human and non-human inside all of us. He believed government had come to possess the science of “inauthentic human behavior” and our only chance to remain true, human individuals was to:

“…cheat, lie, evade, fake it, be elsewhere, forge documents, and build improved electronic gadgets in your garage that’ll outwit the gadgets used by the authorities.”

Hmm, bit of a hoot if Dick’s line of thought was sparked by a viewing of 2001.

However, thinking about Philip K Dick’s thinking tends to give me migraines. I believe my dad had the final say on the matter: 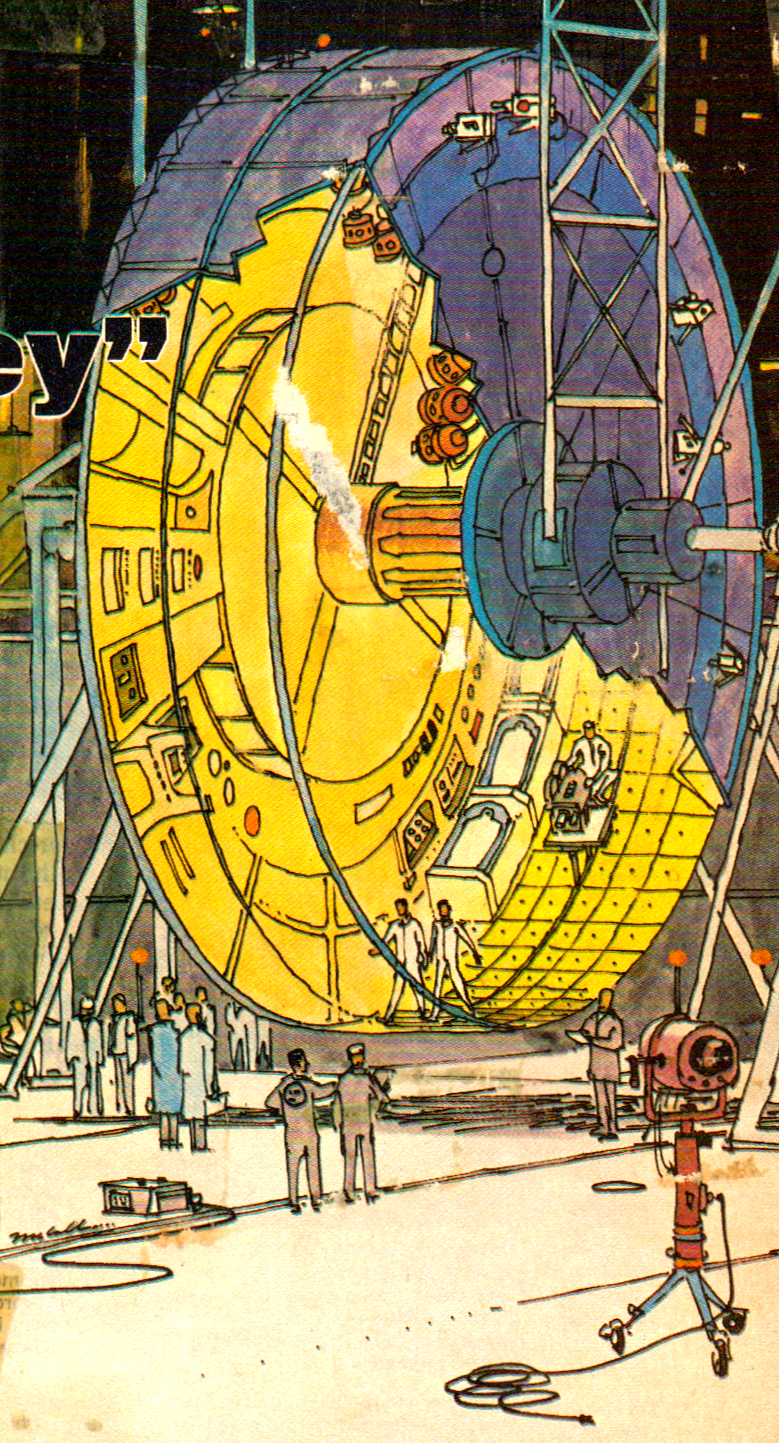 Another thing that bugs me. The movie got it wrong. Pilots and astronauts aren’t robots. Anything but. We just pretend to be inhumanly perfect to fool the public. We’re more human than they are.”

At the time I wasn’t sure what he meant. But when I look back at the parties my dad used to throw for his Air Force buddies, like the one where they spent the entire evening plotting to hijack a U.S. battleship that was being sold for scrap and sail it up the Ottawa river to shell RCAF headquarters… that he and his fellow pilots habitually referred to themselves as “The Wild Geese”… yeah, I see it. These guys had fewer inhibitions than the Hippies of the day. The uniforms don’t mean a thing, or at least not what most people think.

To my dad the film would have been more credible if the crew had smuggled booze on board, or short-sheeted each other’s hibernation cubicles, or faked emergencies to panic mission control. This the opinion of a highly experienced Royal Canadian Air Force Squadron Leader. No wonder dictators are afraid of their military general staff. Those officer guys don’t respect ANY authority! But I digress.

What else was wrong with the film?

Other people feel certain that anything so puzzling and obscure must have hidden profundities, and go into complicated explanations…”

Don’t forget 1968 was still the height of the Hippie era. Lots of people looking for hidden meanings… in everything, not just movies.

“…Kubrick has taken the whole mythology of our scientific culture… and made it into a piece of pop culture, a technological freakout, a celebration of the big trip in both senses, inside us and out there.”

Speaking of tripping out:

Glendale manager Cottingham says the staff now recognizes ‘regulars’ who have returned four or five times in less than three weeks. Some of them, especially teen-agers, prefer the front rows… because of the immensity of the curving Cinerama screen. The kids feel that the closer they get, the more intimately are they involved in the almost psychedelic glories…”

Allegedly one tripper ran up the aisle screaming “It’s God! It’s God!” I suspect the same story was told in every city the film played. One of those journalist myths too good to pass up…

Myself, I was a bit disappointed in the trip across the universe. The sequence of images wasn’t quite right. Should have been speeding up, sucked through the wormhole, slowing down, then drifting across the alien’s planet to the ultra-yuppie apartment. I felt the visual logic somewhat jumbled. But that’s just me. Nit-picky like my dad.

The great puzzlement that leaves audiences chattering is the final scene…”

I don’t know why. As a 16 year old SF fan it was perfectly obvious to me that aliens used the first ‘slab’ to jumpstart evolution, then left another slab on the moon to be discovered by a technologically advanced humanity and trick us into going to the orbit of Jupiter where a third slab would deliver a specimen human to wherever the heck the aliens lived (or used to live) so that a fourth slab could complete mankind’s evolution by turning one of us into a god-like being that would rescue humanity from itself. Made perfect sense to me.

It’s interesting to note that in the initial publicity Kubrick was co-credited with Clarke not only for the screenplay but the novel as well. They wrote the novel first. Why?

We decided to work from novel to screenplay because you can always put more into a book than you can show on the screen.”

I’ll say. The book came out the same day as the film’s premiere in Washington D.C., Tuesday, April 2nd, 1968. I saw the film June 20th. Then bought the book July 16th. It confirmed my interpretation. I was right. Everyone else was wrong. Typical teenage thought pattern I admit. But I’m still right.

Are you bothered by the undeniable fact that some people, while dazzled by the film, frankly don’t understand it?”

Kubrick replied: “Not at all. There are certain thematic ideas that are better felt than explained. It’s better for the film to get into the subconscious…The really big things are all done with pictures.”

There were lots and lots of pretty pictures in “2001: A Space Odyssey.” That’s why it wasn’t lame. Too mindboggling to be lame. I loved it. Still do.

None, really,” said Kubrick bluntly. “I honestly don’t think anybody else ever took the time, trouble and money to do the job right.”

NOTE: The above ad is for the film’s second release and takes full advantage of the (then) recent Apollo 11 trip to the moon.