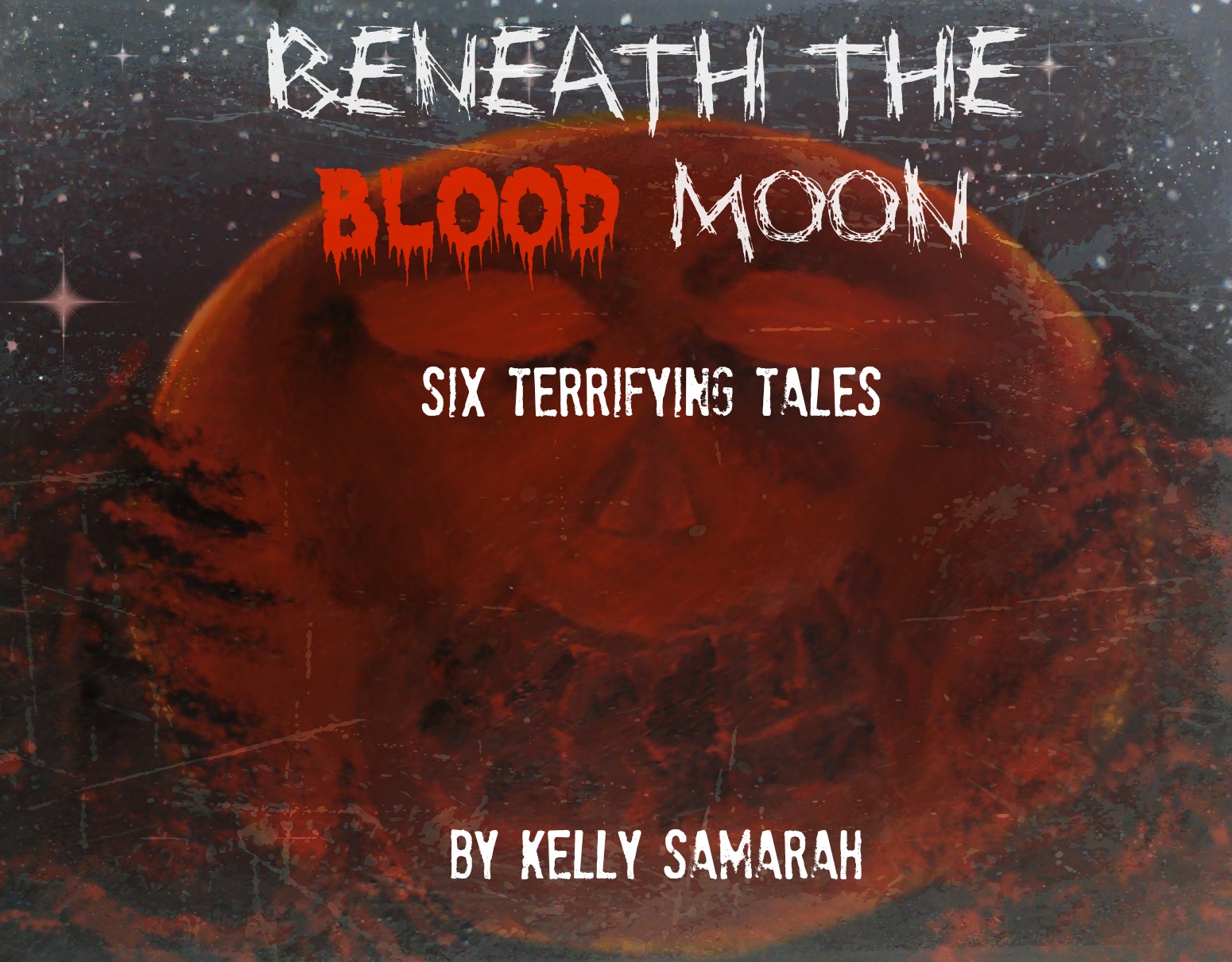 I get that question a lot. Am I disturbed? I
think it depends how you choose to define the word.
Do I like reading horror, writing horror, and
thinking about horror? Yes. Because I, like so many
others, want to explore the minds of people who
step outside what we consider normal. My
characters are extensions of those thoughts and
musings.
For me, disturbed is a character
whispering in my ear because they have a story to
tell. Disturbed is becoming wrapped up in the lives
of those characters, and the pull they have on me
until their story is out, glaring back at me from my
computer screen. Disturbed is the disruption in my
otherwise normal life, until the character’s voice is heard. So, yes, perhaps I am disturbed, in a way
only I can fully understand.

– introduction to The Edge, the first story in Beneath The Blood Moon

A man succumbs to the voices in his head, a woman grows tired of her overbearing siblings, a woman finds herself stuck in an alternate reality…these horror shorts and more are designed for a quick, scary read that will make you leave your lights on.

With stories ranging from sci-fi to supernatural horror, there is something in this collection for every lover of the dark arts. It will remind you what you loved about reading in the first place.

Kelly Samarah clearly loves the written word. Her’s seems like a life steeped in the classics, and because of it, she expands beyond the limits of the horror genre, into literary terrain. She writes because she loves to write, for people who love to read. She writes for the story, for the idea, and playing it out to its often disastrous conclusion, and does so with a lovely prose and flowing dialogue. Her characters have depth and complexity, they seem like real people, people you might know, and because of it, her stories are all that much more starkly terrifying, when chaos ensues.

After spending several nights reading, and re-reading Beneath The Blood Moon, I was struck all over again by the love of reading, and how terribly effective horror can be, in the written form. Fiction is remarkably adept at getting inside of a character, with it’s unique ability to showcase the inner workings of a human being. You get inside them, and because of it, they get inside of YOU.

Despite the fact that Beneath The Blood Moon ranges into literary terrain, it also acquaints you with the grim specter of horror. It really highlights the question: why do I like horror in the first place? A lot of these stories, most of these stories, start off in the worst possible scenario, and goes from there. You have to wonder, as horror fans, are we just alarmists, constantly preparing for the worst? I think there is one aspect to it that is in preparation for the worst, like you feel like you’ll be more prepared for chaos when it breaks out if you’ve thought it through ahead of time. It makes you feel tough. I’m wary of this motivation, (although guilty of it); no amount of home invasion moves will prepare you for when the psychopaths take over your house. You might want to get a punching bag.

Then there is the other aim of horror: to unsettle. To unnerve. It’s aim is to frighten, we must not forget this. It shakes up your sane, stable reality. In Beneath The Blood Moon, Kelly Samarah peels back the resentments that lie dormant in families, the stale desperation of an under-appreciated child, and amplifies it to blaring, until the inherent madness bursts out, like a caged animal. And it’s not all banal slice of life madness, either: a lot of BTBM takes place in alternate realities, supernatural dimensions, sick minds. A number of these stories involve head trauma or getting drugged-the sense of reality gets pretty foggy, at times, truly dragging you through some metaphysical realms. Truly terrorizing along the way.

Kelly Samarah is a true lover of Horror, possibly the ultimate alarmist. Her situations are the worst possible scenario, like when it turns out the demons in your head are real, or look…the ground is swallowing you up. Great. Supernatural horror is particularly effective, in the written form, as we’re not tethered to familiar imagery. Take, for instance, the opener The Edge, where the main character battles with demons, either imagined or real, in the barely described premise of a bare cell in a mental institution. The story ranges freely in and out of the fevered imagination of it’s protagonist, in a swirling miasma of voices and regret. Having spent some time in a cell like this, warding off voices, I can tell you, this is the last situation you want to find yourself in, tormented by your mind, by all the demons of Hell. The mind-melting, inconclusive ending just goes further towards unsettling and unhinging you. You think everything is fine, you’re just having a nice night at home, reading, when Kelly Samarah comes out with phrases like:

His glasses melt into his skin as the color begins to
change from a healthy peach glow, to gray, creased
with ooze. His eyes become hollowed depths of
black, his teeth jagged bits of metal waiting to slice
my skin. I am frozen in fear as he wraps his once
normal hand-now a gruesome claw- around my
head

and the bottom drops out. You are suddenly, fearfully reminded: the aim of horror is to unsettle. To terrify! What makes us do it? What makes us plunge into the fray, over and over? It’s a perverse instinct, that yields many interpretations, best saved for a later date.

While Samarah’s work seems steeped in the classics, there is a distinctly modern edge to these 6 short stories. First off, the pacing: there is very little fluff in these stories, the action is fast and clipped and unrelenting. In the battle for people’s attention spans, there are no prisoners. Kelly Samarah has freebased the forms of gothic horror, the supernatural & sci – fi, boiled them down to a neon incandescent sludge, and injects them into your retinas. While some of the settings, like a rural graveyard or a family farm, might make this seem that you are about to read homage, Samarah surprises-there is a nihilistic, nearly infernal edge to a lot of these stories. She’s not afraid to send you off on a bum note. Secondly, there is a cinematic quality to her writing, that makes it easy to visualize what she is describing, however unnatural it may be. There is a paragraph from the alternate reality, speculative SF story Parallels that particularly reminded me of a camera shot:

She fell to her knees. The delayed reaction of
her arms and hands couldn’t break her fall, and she
toppled sideways, rolling onto her back. She stared
up at a lazy rotating ceiling fan, until it was blocked
out by the monster’s enlarged head as he leaned
over her. She closed her eyes and let it all go black.

I feel like this blending of literary and cinematic forms is one of the most promising aspects of current horror. The written word is more unsettling, but nobody beats film or TV for pacing, for tension and release, for cutting the fluff. What we are seeing now is a generation of author’s who have cut their teeth on the classics, all the way from Frankenstein to Carrie, but are also steeped in Hitchcock, Psycho, American Horror Story. We have seen it all, and hopefully picking out the best.

Every story in Beneath The Blood Moon is truly terrifying. They kept me awake at night, poised bolt upright in my bed, heart palpitating in my chest. I wondered, on several occasions, why I subject myself to this? Like a true Lovecraftian anti-hero, sequestered in my turret, I just have to know. And, despite the tremors and night sweats, I’m glad I spent the time with Beneath The Blood Moon. I re-found my love of the written word, of the way imagery streaks and swarms in your mind’s eyes, when you glance at the page. It stretches and strengthens your imagination, your ability to concentrate. Literature will make your life a richer, deeper and more meaningful experience, doubly so for the writer. The truest mark of success, how I know that Kelly Samarah is a Genius, is how it left me diving for my notebook and pens. She got me thinking analytically, about the form of short horror, breaking things down into characters and tropes and settings. It is a lifelong aspiration of mine to write horror, and Kelly Samarah has set me again upon my path.

Don’t let the homemade artwork or $3.99 price tag fool you-this may be private press, but it is world class! It just goes to remind us that there are masterpieces coming out every day, and it is part of our job to not become jaded or stop looking. That’s part of what we do, here at Amazing Stories. I will continue to ferret out the most vivid ichor i can squeeze from the Horrorstone, and report my findings.

Kelly Samarah is a generous woman, who runs an author blog, in her spare time, supporting and spreading the word on other indie authors. It’s about time she gets the recognition she deserves, and someone throws the spotlight on her! For fans of Stephen King, H. P. Lovecraft, John Carpenter, Night Of The Living Dead, cemeteries at night, and getting creeped out at work, you NEED this collection!

Kelly Samarah has been generous enough to share the short story Hailey, which she claims to be her favorite, on her website, kellysamarah.com. It’s a sordid family drama, taking place on a grand old family. There’s a fierce storm brewing- a thick ominous tension hangs in the air. Everything seems on the verge of breaking open, as family secrets and buried resentments threaten to claw their way to the surface. It reminds us, we all have a family, and most of them are probably screwed up. But probably not as screwed up as Hailey’s.

NO MORE THUMBS TO LIVE UNDER
Hailey just wants to be a good girl.

Check out this appertif, then rush over to Amazon, and pick up a copy!

Beneath the Blood Moon

It’s about the same price as a candy bar, and provides hours and days of twisted entertainment! While you’re at it, you might consider leaving a review on Amazon or Goodreads. She’s an up-and-coming author, and needs all the support and endorsements she can get. Plus people need to know the cream of the crop. Let’s let the drivel sink, and champion the classics to the night skies! Beneath The Blood Moon is a stone cold classic. I can’t wait to read her other books.