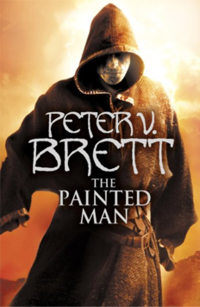 Here’s what I liked about Devi Moore. She was a human with human problems. Yes, she was caught up in this huge conspiracy involving aliens and genetic warfare and whatnot, but she was relatable because she had to deal with ideas like friendship and love and frustration on top of everything else.

When we read, we want to relate. We want to see the parallels in our own lives.

Sometimes though, what we’re given starts off strong, but finishes hollow. Such is the case with Peter Brett’s The Warded Man (US edition;  The Painted Man, UK edition).

Here’s the tale of Arlen, a young man from some backwater hamlet who became a famous hero. Every night, demons rise from the ground to bust things up and mutilate people. Everyone keeps them at bay with wards carved onto their homes. One night, tragedy strikes and Arlen’s mother is killed while his father watches, safe behind his wards.

Arlen, in that moment, learns that his father is a coward and decides to leave home. He travels around with a Messenger, a sort of wandering warrior/post-man, who provide correspondence between the cities and hamlets, but vows he’ll find a way to fight back against the demons.

It’s your typical start. Young kid with something prove and nothing to lose. Something tragic happens, but he grows stronger from it, etc. This isn’t so much a rags to riches story as it is a weak to strong story.

Before long, Arlen has to deal with the very real possibility that a life on the road means an early death, and torture for the people he cares about. His surrogate mother wants him to stay within the city walls, and so does the girl he falls in love with. In the end, he chooses his dream over them, rejecting a life he sees as a prison. It’s a very interesting mix of emotions, and I think Brett pulls it off pretty well.

We get to see Arlen struggle with his quest for revenge, and the idea that he could be happy if he were to just give it all up and hang out within the safety of the cities. He wants to marry this girl, but she can’t accept him if he won’t commit to staying put. He wants to accept this woman as his mother, but he can’t get the image of his birth mother dying alongside him. It tugs at you, and you want to see Arlen get what he wants. You want to see him be capable of both the life on the road, and the family at home. But things aren’t that simple in real life, and eventually he chooses.

And he never goes back.

Arlen begins a quest to discover ruins of the old world, hoping he’ll discover powerful wards that can hurt the demons. He does discover some, gets betrayed, and then…

… and then we flash forward to almost a decade later and he’s this insane badass who’s tattooed from head to foot in wards that make demons explode.

But not only is he basically invincible, but he’s completely changes emotionally and personally. He’s no longer the stumbling boy, he’s not even the slightly arrogant hothead warrior he was before his betrayal. He’s this rather emotionless stoic and the only thing he cares about it killing demons.

Yes, there is some conflict for him, but he’s not a relatable character anymore.

When we catch up with him, he’s already a legend. He no longer has the concerns of a regular Person. He’s larger than life, and therefore, we can’t reach him anymore.

There’s nothing wrong with characters in fantastical situations and possessing crazy powers. But if you use them as an excuse to remove their humanity, and thus their ability to bring us empathy, then you’re doing them a disservice, as well as the reader.

The Future of Farming

The Shaver Mystery is part of the history of Amazing Stories Magazine, but it is certainly not considered one of the magazine’s shining moments. Barry Malzberg touched on it briefly in his first blog post here. In a nutshell, the Shaver Mystery was the “UFO phenomenon” before the actual UFO phenomenon. In 1943 Richard Sharp […]

Well, it’s been quite some time since we’ve heard from Spanky and the gang!