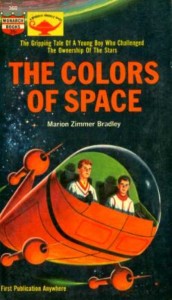 Admittedly, the cover is what initially caught my attention while sifting through some old books at a used book store. The image of two young boys zipping through space in a bubble-faced craft was too much to pass by. Oh, I had been slightly familiar with the author, but I hadn’t had the chance to read her work yet. That is until now.

The Colors of Space is a classic, fast-paced mystery adventure. Seventeen year old Bart Steele is thrust into a quest across the galaxy to find out how and why his father died. But in order to travel between the stars, people are dependent on the Lhari, an alien race with warp-driven ships capable of reaching speeds hundreds of times faster than light. This is made more difficult with the understanding that humans cannot survive faster-than-light travel except when they are put into a deep cold sleep.

Though the science is the eventual crux of this story, the characters are what makes it work. The comfort and believability of characters can make the most unbelievable scenario believable. In the beginning of The Colors of Space, the reader is given a few insights into the alien society and the social difficulties that arise. But it is through the eyes of Bart that we get to gradually discover the truths of the relationship between man and Lhari and slowly unravel the mystery of the technology. You forgive the science because you want it to work for the characters.

On a deeper level, Bart Steele is the kind of archetypical hero that writer Joseph Campbell would be proud of. Those familiar with Campbell’s stages of the monomyth philosophy might recognize a few similarities here. In brief, after finding out his father is dead, the young man accepts his call to adventure. He then enters the belly of the whale by infiltrating the Lhari and learning the secret behind the technology of the ships. How he handles this new information—through a series of trials and tribulations familiar to hero lore—determines his fate. Finally, atonement to his father and his father’s work is reached and this enables Bart to return home enlightened, coming full circle so that his life can begin anew. It is a classic form of literature that has outlined many successful stories.

Prior to reading The Colors of Space, my appreciation of author Marion Zimmer Bradley was limited to seeing her name here and there with the vague understanding that she wrote science fiction. I now apologize to her fans for my ignorance and vow to look for her other works. She was a talented writer and should be mentioned more on sites like Amazing Stories. I’ll try to do my part.

On the night of February 12, 1949, the city of Quito-Ecuador was moved by the alleged news of a Martian invasion