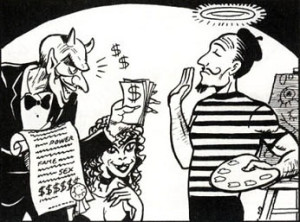 I am not sure when we collectively decided that Artists must be above mercenary motives, but the “starving artist living in a garret” is a cherished descriptor that simply won’t die.  In the 18th century the figure of a literary man living in poverty because his ideas were too unfashionable or politically incorrect was a familiar cliche’.  At that point in history artists were not in similar straits; they were considered craftsmen who worked for the rich and if they were any good at what they did, they made a comfortable living.  Then came along 19th century Romanticism and the idea of artists as rebel geniuses who are poor because they only paint what inspires them, and won’t prostitute their “gift” by painting pictures people actually want to buy.   Living the life of a poor bohemian became fashionable; to be a real artist you were supposed to “suffer for your art.”

Art is one of those rare vocations that are valued the most when undertaken for passionate, not pecuniary reward. 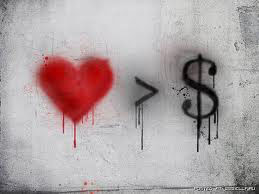 Like caring for small children and the elderly, or working with the homeless or drug-addicted, “making art” is for those chosen few who revel in the idea of being perennially financially under-nourished and socially under-valued.  Right?  Any person who sets out for a career in the “arts” expects – by definition – to be described as young and/or struggling for most of their adulthood, whether they are, or not.  Indeed, any person who wants to be an artist is often told that just barely making a living at what they have spent years being trained to do represents a modicum of success.

Artists get in the habit of mindlessly repeating sayings like:

– Do what you love and the money will follow

– As soon as money enters the picture, pure art is diluted and compromised.

– Art for Art’s sake is better than art for profit’s sake.

Of course, like all short hand ways of thinking, none of these sayings are 100% right or wrong.  The problem is that – and as you may have noticed – they tend to describe groups of people least likely to see what’s wrong with them, and not people who are investment bankers and stockbrokers or IT entrepreneurs.  😉  But “doing it for love and not money” is one of those dearly held concepts that have infected artists and the art market to such a degree that merely knowing – or hearing – that an artist created a work solely to make money robs the creation of some measure of value.  [And see: my post last week: “fine art is better than illustrative art” for further proof]

I’m not saying there aren’t people who are honestly doing it “just for the love of it.”  Of course there are people who don’t need money to justify their efforts.  Some artists are compelled to create, or to spend inordinate amounts of time on their creations despite no obvious reward.  THAT IS NOT WHAT I MEAN BY “BETTER”.  I am using “better” in a conceptual, symbolic sense.  In the sense that we collectively believe that people driven by self-expression and “vision” to create art is a higher calling than those driven by the promise of “filthy lucre” – tantamount to selling your soul to the devil.   And conversely, it leads to the devaluing of artists who are seen as creating for the purpose of gaining some reward, monetary or other.   Artists are supposed to be above capitalism, beyond the mundane wants of everyday middle-class existence, indifferent to other than “artistic reasons” for creating art.  They must be, and remain, pure (as the cartoon above implies)

At the same time, “doing it for love” does not = quality.  An expenditure of time, money or effort is not enough.  In fact, the world is filled with people who genuinely tried . . . but just lacked the talent.  By the same token, doing it for money does not = inferior product.  Plenty of great art has been created because the artist needed to feed their family (Renaissance painters are often cited, working on commission for Royalty, churches, and people with means and influence).  Many of the greatest works in museums would not have existed had artists been left to paint only “for love,” with their artistic freedom totally intact.

Art Done for Love in the SF/F Genre

Given the choice, and assuming they were not independently wealthy (or had families willing to support them) which creative process do you think results in “better” art?  Artists who create art for someone else and earn enough money to continue creating art?  Or artists who create art solely for themselves, even if they never sell any work at all?  CAREFUL: This may be a trick question, if you already collect sf/f art – which until very recently meant you were a collector of illustrative art: which, by definition, is “art created for someone else”  🙂

I have been keeping my eye on the prices for illustrative art, and “so-called” personal art, i.e., non-commissioned paintings, by artists in the sf/f field.  While there have been some few artists entering the field who had never been commercial artists, the majority of artists who have been successful in selling their “personal” works are artists who had already been known for their illustrations for books, magazines and game art, and decided to remain “painters” using traditional media vs. switching to digital technologies.  This meant having to establish and build a market for their personal works to maintain their careers.

At sf/f conventions, most particularly those devoted to art, you will find artists offering paintings done in the same illustrative styles, themes, and techniques as they had used for books and magazines or games, as well as paintings done in completely different styles, with different subject matter, although (to my eyes) the themes are still “fantasy” or “science fiction” and the quality of painting is just as high.  Nevertheless, these artists, in general, are asking – and getting – two and three times MORE for those “non commercial” paintings than for their illustrations.  Artists who come to mind would be Jim Burns, Donato Giancola and Michael Whelan.  If you ask artists why they are pricing these works, and private commissions, higher, some will say because they are taking more time with them, or taking more risks with the subject matter.  Some will tell you that it is to make up for the initial fees and secondary rights these “images” would have earned over their lifetime – and there can be no similar expectation of earnings from personal works, so they must make up the ‘shortfall’.

But if you ask me, these artists would never be getting those higher prices from buyers if the buyers didn’t think, didn’t agree, they were getting something “better” for their money than the cover for a game manual or calendar page.  It’s that perception, that it’s art painted for “love” and not “for money” that is leading them to value it more highly.   Interesting, eh?

I know it’s not that clear -cut.  Commercial artists historically have painted some paintings “on spec” – for their portfolios, to show to art directors, to get work.  These, you might say, were painted for love, but also “in hopes” of getting money.  So where do they fall on that spectrum?  And when the time came to sell them, the artists didn’t ask any more for them, and often asked less than their commissioned works (because they were “good enough” to be published!)  And then there are many successful artists I’ve known who kept painting whether or not they were commissioned jobs – confident that a good percentage of what they created would sooner or later be used commercially – because they enjoyed painting what they were being paid to paint, anyway.  I can name at least two who did that: John Berkey and Richard Powers. So you could say they painted for love, in expectation of money.

Beautiful but still not Good (or) Painting with an Innocent Eye

That is to say, the bias toward valuing art produced “for love” is being driven by our ability to judge paintings as being more, or less, mechanical, superficial or cliche’ ridden.  The kitsch of Thomas Kinkade art, “Painter of Light” springs to mind. We want art with something new to say.

The more we detect fake sentiment or emotion, or (in our case) pandering to a love of dragons and wizards – as opposed to honest “self-expression” – the less we are going to care whether “just for the love of it” was the reason for creation 🙂  To paraphrase Scruton, it will be fun to see if the values keep rising for the art we love – which, In the end, and because of its reliance on representational style, compositions, and themes is indistinguishable from advertising – with the sole qualification that it has no product to sell except itself (!)

Next week it’s Art Hierarchy #4, and why One-of-a-kind originals are better than multiples or reproductions

Stumbling upon Wayne Haag from Sydney Australia, an amazing artist

Where we’ll be over the next few weeks.