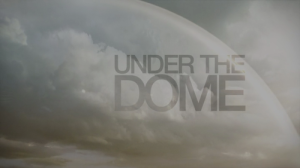 When it comes to King adaptations, there have been more misses than hits. Under the Dome however, is a definite hit. And this is one of the rare times that I haven’t read the source material, so, I get to come at this review from the sole point of a science fiction TV show fan.

Last night was the season finale. That’s right, I said season. It seems a lot of people were confused about this and were under the impression that this was only a miniseries. But the producers are following in the footsteps of shows like Game of Thrones, True Blood, and Dexter and actually fleshing out the book into the proper amount of episodes to tell the whole thing — which will be, at least, two seasons worth.

Now if you don’t know the story, here is the gist: Small Town America, Chester’s Mill, finds itself suddenly trapped within a dome shaped forcefield. And we follow several town folks and their struggle to survive, thrive, and uncover both the secrets of the dome and each other — with minimal contact with the outside world, of course.

It very much feels like a King story, on screen, with his familiar character tropes. Overall, Under the Dome reminds me a lot of an episode of the Twilight Zone, The Monsters are Due on Maple Street, mixed with an episode of Night Visions, A View Through the Window, with a dash of Contact.

The acting is pretty solid all around. Now as I said before, I haven’t read it. I’m sure some fans will have legitimate gripes with the casting choices, but I can’t comment on that. However, I will comment on my favorite performance, which comes from Dean Norris as Big Jim Rennie. He’s a character that you want to like but continuously gets darker, more insane, and more crafty as time ticks away.

The final episode of the season leaves us with a pretty big cliffhanger, oh how I hate those! But I guess that’s the formula you need to bring back the viewers. We’re also given a little bit to think about with cryptic messages and foreshadowing. Honestly, I really don’t know what’s going to happen, and I like that.

I’m left wanting to read the book to find out what happens, but there is so little science fiction programing on TV, that I’d rather not. After all, I have a lot of books I still need to get to and very few shows I can watch. I’m sure I’m not alone with this problem.

Under the Dome is worth your time if you’re looking for a decent show, and it definitely surprised me in how engaging and unpredictable some of its main plot lines are. While I don’t normally rate things, in this case, I’ll give the show three pink stars out of five!

Giant rabbits and a novel that speaks to literary genre.

The first science fiction story authored by a woman to appear in a science fiction magazine. FuturesPast Editions Amazing Stories Classic reprint of Clare Winger Harris’ THE FATE OF THE POSEIDONIA