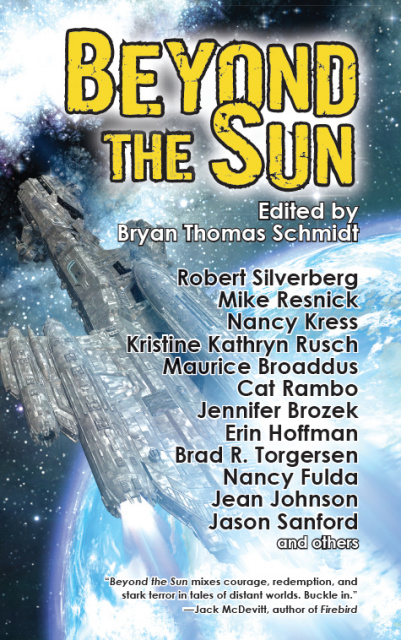 There was a time in science fiction when finding well-written stories about human exploration out past the edge of our solar system was an easy task. Novels, anthologies, and magazines filled with tales of the outward push abounded. However, as the field has grown and trends and subgenres have arisen, this type of science fiction isn’t as common as it used to be. While there are still practitioners of this particular type of sf, readers have to make more of a concerted effort to find it. At least that’s been my experience. While greater variety in subject matter is a good thing, keeping the field healthy and fresh, it’s also good from time to time to return to the foundations of the field.

Bryan Thomas Schmidt has assembled an anthology of mostly original tales (three reprints) of what it will be like to be a colonist on, or explorer of, other worlds. I’ll not try to give a complete listing of each story in the anthology, since there are 18 of them. I liked almost all of them, and thought many were as good as anything you’d find published in the major short fiction venues. The only one that didn’t work for me was the one that involved the talking rocks. YMMV.

I was struck by several things. First, the overall quality of the stories was quite consistent. Yes, there were some stories I liked better than others, but really only one that didn’t work for me. That was more a matter of not being able to suspend my disbelief than the quality of the writing. There are major names included here (Rusch, Resnick, Silverberg, Kress) along with a number of up and coming authors. There really wasn’t any discernible difference between the two groups. All of the tales contained herein are polished, professional work.

The second thing that stood out was the variety of settings and situations I encountered. There several stories involving colonies founded on religious principles, and not one resembled the rest. There were explorers who fought for their survival, and there were colonists who made first contact with species they didn’t know were sentient when they landed on the planet. The latter is a favorite trope of this type of science fiction. No author had the same take on it as any other.

Back in the spring, I wrote about crowdfunding as a new publishing model as well as interviewed such a publisher and reviewed several examples (here, here, and here). Beyond the Sun is another example of what crowdfunding can accomplish. In the interest of full disclosure, I need to say that I supported this one. I’m glad I dd. It was a good investment, and I think I got my money’s worth. Bryan Thomas Schmidt has put together a top-notch anthology. I’m looking forward to his next project.

The level at which I supported this project came with both an electronic (epub) and a print edition. I switched back and forth, depending on the circumstances under which I was reading. In both cases, the production values were of the same level of professionalism that the fiction did. The cover art tells you what the anthology is about, and the text on the cover gives plenty of information while still being respectful of the art. The binding on the paper edition held, with no pages coming loose. The electronic edition was well-formatted with no odd line or page breaks. The interactive ToC functioned as it should. I was able to move back and forth throughout the book without any problem.

If you like stories of exploration and new planets, then this is one you’ll want to check out.

Oh woe is the moving book collector! Paper really IS heavy! (But you now, no matter how heavy they all are, you’ve gotta have ’em!)