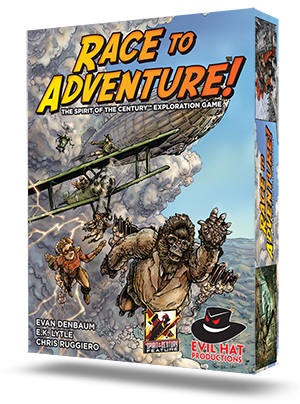 This week’s post is going to be a little different. Instead of reviewing a book, I’m going to review a game, or rather I’m going discuss my experience with playing a game. There are some aspects of the game I haven’t played yet, so I’m not reviewing the entire game.

The game is, of course, Race to Adventure! In my post on crowdfunding from a few weeks back, one of the books I mentioned having in my TBR stack that was crowdfunded was a volume entitled Dinocalypse Now. Race to Adventure! is associated with that book.

There was a followup Kickstarter for the game, and I supported it. After a few delays (not necessarily Evil Hat’s fault), the game arrived this week.

The basic setup harkens back to the glory days of the pulps. The Century Club is a special club in New York composed of adventurers, scientists, and one talking ape. In the game, they go on a scavenger hunt every year. The game is the scavenger hunt.

A set of 12 tiles are laid out, with three on the left representing the Century Club. The other nine are the destinations in the hunt. These include rescuing a prisoner from Atlantis, locating a time portal in an Aztec temple in Mexico, recovering lost treasure in Brazil, outwitting Gorilla Khan in Antarctica, and other adventurous things. Upon the completion of each mission, players take a stamp, which they place on their passport. The winning player is the first player with a filled passport.

There are 6 items tiles with which a player accomplishes the missions. Three of these are used to move around: a biplane, a zeppelin, and a jet pack. The other 3 allow the player to complete the mission at a particular location.

Race to Adventure! is a game for 2 to 5 players. I played with my nearly 11years old son. The first time we spent about half our playing time making sure we understood the rules. The second time was much more fun, since by then we (mostly) knew what we were doing.  The game takes about half an hour to play, so if you’ve got a bit of time, you can get more than one game in.

There are some minor variations in the rules for 2 person play. They didn’t detract from our enjoyment, but I can see how it will be even more fun when we can find more players. My son loves this game.

That’s good, because so do I. It’s fast-paced and fun, with a nice pulp feel to it. There’s an advanced version called the Shadow version. Things are a little more complicated in it. My wife went to visit her parents and took our son with her this weekend while I stayed home and got caught up on work. As a result we haven’t had a chance to play more than two games. I suspect we’ll play more this week.  My son and I have a great relationship, but anything that lets us spend time together is something I’m going to pursue.

There’s also a Dinocalypse Now extension set, which I made sure I got when I pledged the original Kickstarter. I’m looking forward to playing it.

I realize this isn’t a real review of the game because I’ve not played all components of it, nor have I played anything but the 2 player version. Still, I wanted to make you aware of it. It’s another example of what can be accomplished by creative artists through crowdfunding.