One of the reasons pricing art is so difficult in SF/F art is that – and unlike gallery/fine art – our field lacks ART CRITICS.  I’m not talking about the people who complain about sexy barbarians (male or female) on the covers or books, or any other cultural taboos that our genre is infamous for challenging, pictorially.  I’m talking about art criticism of the particular kind that is common to the “art establishment” and that is considered a pro forma right of passage for a literary publication.  Not historical criticism, the kind that says “yes, St. John was important” or even “Frazetta Rules!”.  I’m talking about the contemporary criticism of work by living artists.  The kind of criticism that is common, and expected, in the SF/F literary world, but is entirely absent from the SF/F art field….why?

ARTISTS:  are “taste facilitators” in that through their pricing, and their choice of what to offer me, reflect their hopes for what their art is worth and enable me (as buyer) to express my tastes in art by expressing a taste for theirs.  In that indirect way, artists work as critics.  They weed out what (ostensibly) is not worth showing, and control what is offered, and for how much.  But as every collector knows, withholding art from the market (on one hand) or pricing it at levels which reflect an artist’s subjective attitude,

is a lousy way to establish a rational basis for evaluating art.  Because, let’s face it, some art, is more “equal” than others…and it doesn’t matter that artists are the best judges of their own works, and are capable of picking out the best and worst of it.

COLLECTORS: are the “tastemakers” – through the choices they make, they establish the value of art.  But is consumer behavior, or price alone, sufficient to establish the kind of “rational basis for art appreciation” that is at the foundation of art criticism?  No.  Popular tastes and fads may drive purchases and prices up, but this is not, fundamentally, at the heart of what we crave, when we ask for judgments and critiques of contemporary art.

All of these routes to criticism are valuable, but not “on the mark”.

An article in Art Forum magazine, February 2005, “At a Crossroads: Peter Plagens on the “Postartist” observed that art critics come in three types, all of whom are common in the established art world -but appear to be in short supply in ours.

Goalies: most often these are critics for the popular press, playing “defense” in that their job is to prevent undeserving art from being considered good.  The best of them aren’t trying to bring artists down; rather, they encourage artists to raise their games.  They defend not against success, but against “sloppy, indulgent, imitative, witless, and expedient art”.  Michael Dirda (for the Washington Post) comes to mind as a literary critic that has played this role magnificently for books.  Where is his equivalent for art?

Cartographers: these critics want to make the art landscape more intelligible.  They dissect, write analyses, carve out ways to describe what exists.  Vincent DiFate comes to mind as the closest thing to that kind of critic, in his “Infinite Worlds” art book – preceded by his occasional column/artist interviews for Andrew Porter’s Starlog/SF Chronicle.  But a cartographer is not neutral; they make judgments before drawing their maps, deciding ahead of time which artists and which works, should be documented.  Karen Haber and I discussed this very thing, our role in that, as critics, at a panel “dialogue” at Renovation (SF Worldcon 2011)  How we choose works to include in art books we’ve written makes us art critics of the cartographic kind.

Evangelists:  These are advocates proselytizing on behalf of artists they consider deserving.  “Champions” for this or that artist . . . either by what they say, or what they buy, or who they choose to ‘feature’ on their blog/post/site.  When a person who can afford to buy anything they like, decides to focus on XXX, other people can’t help but pay attention.  Many’s the time I’ve been aware of that at conventions – people looking at bid sheets, looking to see what item has bids, and who is bidding.  The same phenomenon affects online auctions; items with bids tend to attract other bidders (figuring someone feels this is a “bargain” so I might as well jump in!).  Thing is, not all evangelists are equal.  What seems unique, novel or profound to somebody who’s been around five years may seem only moderately “original” in concept or execution to somebody who’s been collecting that kind of art for 40 years.  A painting that might be amusing to someone new to the field will be “here we go again (yawn) to me.

The pity of this is, if one can say “pity” and “critics” in one breath, is that just as the SF/F art field is finally emerging from the Siberia of inattention, exclusion and denigration the art establishment is no longer producing full-time art critics.  According to Andrew Russeth (Gallerist posting 5/20/2013)  “there are now less than 10 full-time art critics working at newspapers and magazines in the United States.critics on staff at a general-interest outlet, regularly writing bylined articles only about visual art with few, if any, other editorial responsibilities—the model here being the four regular art critics of The New York Times, who generally limit their art criticism, with a few exceptions, to the pages of their newspaper, and whose work in essence serves as a record of art in the city.”   As Russeth points out, it’s not that there aren’t critics who are earning a living that way, and if you include people who write or write and edit for specialized art publications, you’re dealing with a whole lot more. It’s that most papers and magazines now have arts critics who cover a variety of disciplines and/or have severely limited the scale of their art coverage.  In fact, you could argue that with the expansion of websites and social media, there are now more critics than ever before—it’s just that what is disappearing is the tradition of a regularly recurring voice in a widely circulated newspaper or magazine or even alternative paper: people who have the opportunity to expose a wide variety of art to a broad audience on a continual basis.

And if that’s a sad fact for “fine art” – consider the ramifications for SF/F art….which NEVER HAD (and still remains) DEVOID of any useful critics, whether part timers or not.  Oh, sure.  They may call it “Steve’s Fantasy Art Critique” (http://www.somethingawful.com/news/steves-fantasy-art) but is it?  NO.  What it is, is a compendium of Steve’s favorite painters and paintings, almost all deserving of a 9.5 out of 10 rating on his personal score card.  This is useless.

What we need, is a rational discussion or evaluation of visual art in our field, so as to provide a rational basis for fantasy and science fiction art appreciation.

And that still seems to be missing.  I’m not talking about historical criticism and evaluation, a form of art history.  I think we’ve come to the point where we no longer have to argue over the merits of J. Allen St. John, and his contributions to the field.  I’m talking about contemporary criticism of work by living artists. 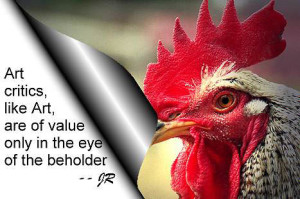 Dianne gets to be a pirate. (We all want to be one too….)

The Origin Story We’ve Been Waiting For: The Rise of Kyoshi

A Pair of Japanese Robots (Hopefully) Just Landed on an Asteroid