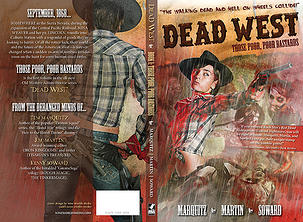 While I’m not exactly what you could call a zombie fan, I am a fan of good writing and good writers. When I first heard about Those Poor, Poor Bastards, only one of the names on the cover was familiar to me, and that was J. M. Martin. I loved his nautical fantasy, Tisarian’s Treasure (reviewed here). Since then his name is one of those I keep an eye out for.

So I decided to take a chance and read something I normally would pass on. Mr. Martin saw a comment I posted on another review site expressing interest in the book, and he kindly sent me a review copy, for which I would like to thank him.

Anyway, this short novel is the first of a series, which the cover blurb describes as “The Walking Dead and Hell on Wheels collide.” Not having seen the former nor being familiar with the latter, I would describe it as Night of the Living Dead meets H. P. Lovecraft and Dr. Fu Manchu since those were the things that came to mind as I read the book. And, no, I’m not going to explain what I mean by that. You’ll have to read the book to find out.

The story concerns a young woman named Nina, whose deceased mother was Native American and whose father is white. To avoid trouble, Nina often tries to pass herself off as a boy. Things kick off pretty quickly, when Nina is accosted in town by a ne’er-do-well whose has figured out her disguise and thinks the fact that she’s not white allows him to take liberties. He doesn’t get very far before zombies are coming down the street.  Only these are animal zombies, dogs and horses.  But the people zombies aren’t far behind, and they’re harder to stop than the animals.

And we’re off and running. Literally. Nina, her pa Lincoln, the ne’er-do’well and his brother find themselves fighting and running for their lives along with a man who happened to be in the area. Along the way they’re joined by two whores, a railroad magnate, his crazy assistant, a family of three, and a priest and his companions, which include a marshall, a scout, and an Indian.  For part of the book, they take refuge in an abandoned fort.  It doesn’t take long for Nina to figure out that not all of the monsters are outside.

If that sounds like a lot of people to keep track of, it is. But don’t worry. They won’t all make it to the end. C’mon, this is a zombie novel.  Very few people make it to the end in a zombie novel.  Some people would say you shouldn’t have this many characters in a novel this short because there’s not enough opportunity to develop them as individuals. I don’t buy it. These three guys make the characters stand out. All of them are unique individuals. Nobody showed up from Central Casting.

The action moves quickly, and there’s a great deal of it.  It’s violent and bloody and graphic.  Like I said, it’s a zombie novel.  People in zombie novels don’t try to understand zombies.  They kill them; if they don’t, they get eaten.  (These zombies aren’t picky and will eat more than brains.)  When you get about half way through, you discover there’s more going on than just your generic zombie apocalypse.

Zombies have become popular with people of all ages. My son and a friend were fighting zombies when they were eight years old. This book, however, is strictly for adults. The content is pretty graphic, and that includes the language, the violence, and the sex. If you’re squeamish or easily offended, you might want to give this one a pass.

Of course if you aren’t bothered by graphic content and like a good zombie tale, then this is one you’ll want to sink your teeth into. Figuratively speaking, of course.

The subtitle of the book is the Dead West series, volume 1. In his afterward, J. M. Martin says there are six volumes planned. So if you like Those Poor, Poor Bastards, know that more are coming. Just like the zombies.