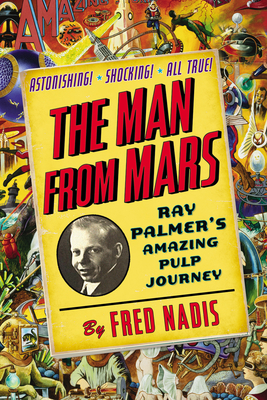 Ray Palmer was a major figure in the science fiction field, and to my knowledge, there hasn’t been an objective biography of him before. Now there are two, this one and Richard Toronto’s War Over Lemuria. I’ve not read the latter yet but intend to sometime in the next couple of weeks.  I’ll let you know what I think.

I’m not sure you can call The Man From Mars an objective biography. One of the roles of a biographer is to take the known facts of a person’s life, decide which ones are significant, and assemble them into some sort of readable form that gives a picture of that individual. Preferably the biographer will do this while checking his or her own prejudices and agendas at the door. Given that human beings are contradictory creatures who aren’t always consistent in their thoughts and actions at a given point in their lives, not mention they tend to change as they age, this can be a daunting task. Some biographical subjects are more mercurial than others, which is one reason why two biographers can paint very different pictures of an individual.  Those pictures can be painted with broad strokes or detailed lines.

The picture Nadis paints of Ray Palmer is one that at times resembles early finger painting. Nadis hits on all the major points of Palmer’s life: childhood, early involvement with science fiction, editing Amazing Stories, involvement with Richard Shaver, leaving Amazing to start Fate, descent into occult and pseudoscience pursuits, and death. But he does so in a slipshod manner.

The first couple of chapters are fairly well organized, if a bit thin on details at points. Little emphasis is given to Palmer’s tenure as editor of Amazing Stories, with only one chapter (Chapter 2) devoted solely to Amazing Stories. In Chapter 3 Nadis introduces Richard Shaver into his narrative. From thereon Nadis elaborates on some of the more unsavory aspects of Palmer’s life, showing him becoming more and more involved in fringe ideas, such as the Earth is hollow. Richard Shaver claimed to have evidence of an underground civilization that was thousands of years old. The beings who ran this underground world were called Deros and had it in for humanity. They were the source of most bad things that happened to people. While many of his works were in the guise of fiction (often edited and added to by Palmer or others), Shaver insisted that the inhabitants of this civilization were real and his stories were factual. These wild tales involved travel to astral planes, hollow Earth, and racial memory. The story “I Remember Lemuria” kicked it off. Shaver stories eventually took over much of the magazine, much to the dismay of many fans.

Nadis provides only a cursory account of Palmer as science fiction editor. Several times he mentions that Bea Mahaffey was Palmer’s assistant editor when he began publishing Other Worlds Science Stories. To quote one line that Mahaffey “became coeditor and is often credited with making Other Worlds Science Stories one of the better SF magazine of the early 1950s.” (Ch. 5, p. 146) Yet in the next page and a half he gives Palmer all the credit for the quality of the magazine. (Eric Frank Russell’s classic “Dear Devil” was published in Other Worlds.) And this after he’s spent 2 chapters on detailing Palmer’s efforts to introduce pseudoscience and crackpot theories into Amazing and publishing occult oriented magazines. The first issue of Other Worlds had “The Fall of Lemuria” as its cover story, something Nadis fails to mention. Mahaffey was an important figure in the field at the time, and it would have been nice to see more attention given to her role in Palmer’s magazines. I find it difficult to believe that Palmer would have taken Other Worlds in the direction it went. Rather I suspect Palmer eventually gave Mahaffey a free hand and let her develop the magazine while he devoted his attention to Fate. After all, he’d had years to develop Amazing Stories into one of the top publications of the day and instead he ran it off the rails into pseudoscience and the occult. It was left to his successor Harold Browne to repair the damage to the publication’s reputation.

Palmer founded Fate magazine in order to indulge his growing interest in flying saucers. It’s in the chapters devoted to Palmer’s growing interest in occult and fringe phenomena that the book is weakest. Nadis spends pages giving background and history of flying saucers, to the point the book at times becomes more of a history of the early flying saucer movement than a biography. This is true to a lesser extent in some of the later chapters as well.  The impression I got was that Nadis was trying to pad his biography, much like a pulp writer being paid by the word.

There were several things that annoyed me about the book. First, Nadis has the habit of describing cover art, especially Amazing Stories cover art but not showing reproductions of the covers. And the covers that are shown are in grey scale rather than color.

Second, Nadis tends to jump around in time, especially in the last couple of chapters, which hopped between the 1960s and 1970s. This might work for some readers, but it tended to throw me off. The last chapters look at how Palmer’s ideas developed, such as his politics, or certain episodes in which he was involved. I understand that this approach may have been the best way to organize unrelated material, some of which covers a span of years, but I found it hard to follow at times.

Third, there were some glaring typos, such as referring to John W. Campbell as John C. Campbell (p. 147). That’s just sloppy copyediting.

There is one story about Palmer that has circulated for years. Supposedly Palmer conned a group of teenage boys into stuffing envelopes with renewal notices for Amazing Stories by telling them the notices were warnings to citizens about the danger the Deros posed to the US. Whether this story is true or not (I tend to think it is), it’s been repeated enough that a thorough biography should address it.

As the book goes on, the picture Nadis paints of Palmer becomes that of a total crackpot obsessed with flying saucers and conspiracy theories. It’s also a picture that becomes more uncertain. Was he a con man, preying on the gullible? Did he really believe the crackpot theories he promoted, and if so, to what extent? Nadis never really tries to answer these questions. I acknowledge these questions may not be answerable. But if a biography is going to present a clear picture of an individual’s life, some conclusions need to be drawn. Nadis fails to do so. Rather he gives us the following: “Along the way, in Amazing Stories and Fate and his other publications he developed the uncomfortable blend of science fiction and true mystery- leavened with irony- that has continued to shape our culture and entertainment industries. This legacy can be regarded either as a great act of mischief or as a gift” (p. 262).

Well, which it is it, mischief or gift? I tend to lean towards mischief, and I’m being charitable. As a person with years of formal scientific training, I am appalled at some of the nonsense (to put it nicely) that Palmer tried to peddle through his magazines. As a lifelong fan of science fiction with an interest in the history of the field, I can’t help but side with those fans who thought Palmer had ruined science fiction. While he may not have ruined it, he did little to nothing to raise the quality of what was published, certainly not with Amazing Stories.

The Man From Mars is a flawed biography of a flawed man. I’d say if you’re interested in reading it and aren’t a serious student of the field’s history, wait for the paperback (assuming there will be one, which isn’t certain) or read the ebook. Or check it out from the library. The hardcover price is a bit much for the casual reader.