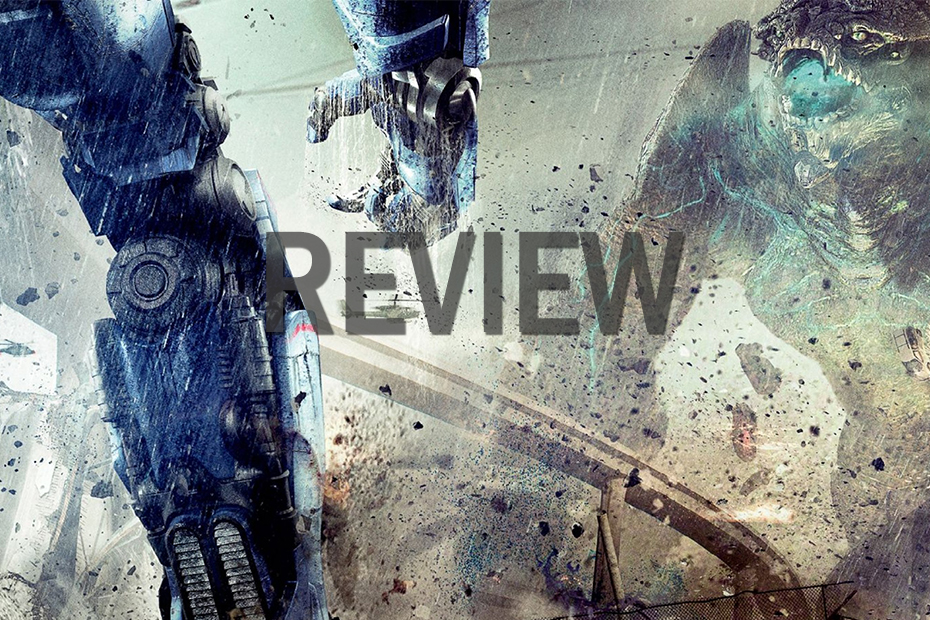 It’s bizarre to consider, but I’ve been plagued all week on how to begin my review of Guillermo Del Toro’s new giant monsters versus giant robots movie, Pacific Rim, not because I couldn’t parse how I feel about it, but because it’s actually a seriously complex movie.  That’s not saying the narrative is somehow muddled and difficult to understand – quite the opposite, actually – it’s that the mythology, design, and overall effort that went into building the world of these colossal forces is just staggering in scale, and it shows.

Minor spoilers discussing the first 5-10 minutes of the film follow:

The essential gist of the story (what you learn in the first 10 minutes of visuals and voiceover) is that in a near future, a dimensional rift has opened at the bottom of the ocean and unleashed malevolent beasts, named Kaiju, of titanic scale onto humanity.  Once traditional military force was proven unfit to properly stave off the invasion, a new weapon was designed to take on each massive foe head to head – thus the Jaeger Program was born.  Jaegers are Kaiju-sized mechas piloted by two “mind-melded” pilots who share their memories and thoughts – allowing for simultaneous movement and determination.  The program, while initially quite successful, began making war heroes think themselves athletic celebrities and their weapons marketable into franchised lines of toys and merchandise.  Then humanity started losing – and losing fast.  At the beginning of the movie, it’s made clear the collective leaders and bent their knees, as they move to construct towering walls to surround and barricade their remaining coastal cities.  They’re losing the war, their humanity, and their hope.

Many will, and have, criticize the story, suggesting the simplicity as a downside – a case of being overshadowed by the action or underdeveloped.  While the story was straightforward, it achieved some crucial points I feel are missing from “action” movies: a coherent mesh between the world’s design and the ongoing conflict, understandable character arcs and decisions within the bounds of the film’s possibilities, likely the least problematic story rooted in the apocalypse I’ve seen in a while, and themes that, while dealing with global perspectives, are personally relatable.  Like a well-oiled, nuclear-powered, 15-story tall humanoid machine built for fighting equally large monsters, Pacific Rim fits together extremely well as a film that is doing exactly what it needs to: showing how humanity can achieve what it never could before. 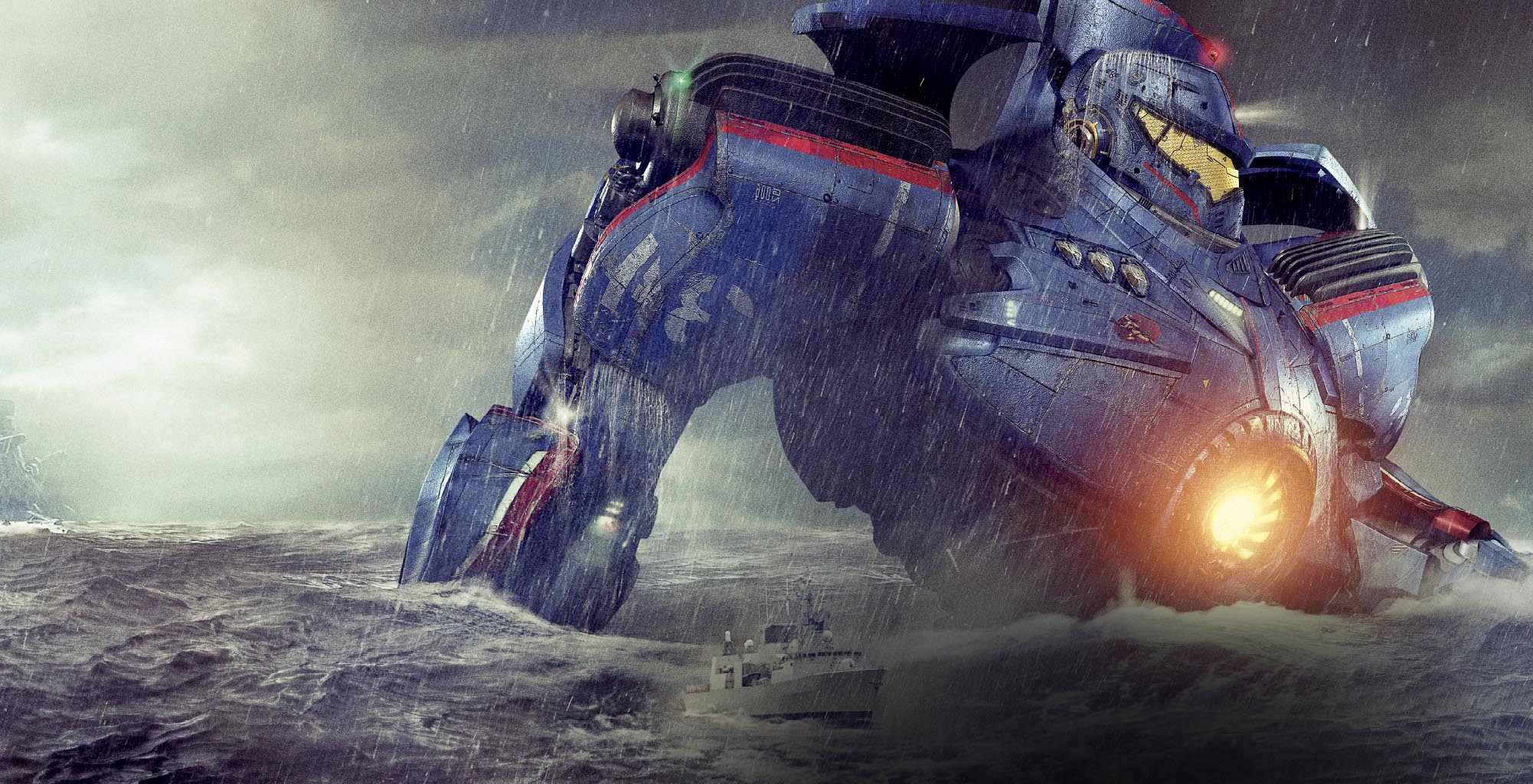 Let’s do a little background.  Kaiju is universally translated from Japanese to mean “giant monster,” Jaeger is German for “hunter” and both find their place in this movie due to their use in Japanese media culture. The first not only being a Japanese word, but a straight-up genre of Japanese stories (the infinitesimal versions of Godzilla, tropes from the Super Sentai genre such as Power Rangers, etc) , the second being an appropriated catch-all name in Japanese media to refer to objects or people who are considered threatening or strong.  Additionally, the hunters of Pacific Rim are mechas: non-sentient, large-scale, humanoid suits of armor capable of fighting just as a human would, but on a much larger scale (Gundam Wing, Robotech, etc).  Truck-sized pistols, laser-swords the with hilts the size of farm silos – you get the idea.  In fact, Del Toro and his team utilized his vast knowledge of anime to inspire the designs for the various Jaegers – all of which are painstakingly designed to embody the country they originate from, the aesthetic of their fighting style, and their military funding.  For me, the roots of the entire mecha genre lie in empowerment, the idea of giving a person the ability to do things on a supreme scale.  The purest iteration of this definitely is the anime series Tengen Toppa Gurren Lagann, and while Jaegers aren’t rapidly going through transformations and combinations powered by unfiltered willpower, there are interesting connections to be made, specifically in the way the Jaegers are piloted.  I wouldn’t be shocked if Del Toro turned out to be a die-hard Gainax fan, what with the indomitable Idris Elba proclaiming, “the better the connection, the better you fight” to two pilots mentally linked to act as one – a concept I cannot stop loving – one could suggest parallels.  What appears to be a gimmick ends up being a powerful mechanic that helps make the character interactions stronger – as they require absolute trust in one another to be at their peak when in conflict.

Alongside the incredible design of the Jaegers, the Kaiju’s appearances are just as phenomenal.  Del Toro is a master of monster design: we know this to be true.  His designs for Pan’s Labyrinth were ripe with hidden terror and sunken portentousness and his vision for the Hellboy movies brought Mignola’s stylized creatures to a life that was unimaginably perfect.  The Kaiju are hidious and slimey – covered in odd bumps and feelers. Often when it comes to monster design, too much attention is set on the obvious: the claws, the teeth, the freakish eyes – but neglecting what the rest of the body is doing.  Del Toro doesn’t forget as his Kaiju’s flesh ripples and deforms from a rocket-propelled punch delivered by Gipsy Danger, the spotlight Jaeger. Additionally, he pays astute consideration to the internals of his monsters, making muscles and veins grotesquely real when exposed and many-colored tongues alarmingly malleable and tendril-like.  Lastly, Del Toro is known for his immense appreciation for practical FX, and though it may not be obvious – it’s very present in Pacific Rim, from the genius lighting in battle (almost exclusively coming from circling helicopters or the Jaegers themselves to the use of a 4-story tall cockpit set used to film the piloting scenes, Del Toro shows how invested he is in making Pacific Rim a visual delight, both with practical and digital FX, which integrate magnificently.  If not for this, the mass and size – and thus, realism – of the Kaiju and Jaegers would not be present. 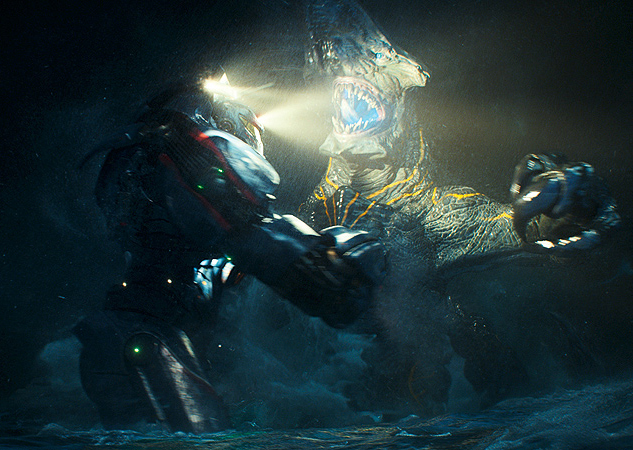 When making a movie that centers around humanity, the cast is pretty crucial.  While the arc around the two pilots of the classic Gipsy Danger, Raleigh (Charlie Hunnam) and Mako (Rinko Kikuchi) and their interactions is fascinating in concept, in practice it comes through just a touch off – as if they can’t quite find their comfort zone. However, pretty much every supporting character is hands-down marvelous – the bickering scientists, Geiszler (Charlie Day) and Gottlieb (Burn Gorman) who approach their fascination with Kaiju from hilariously opposing angles, the opportunistic and lusciously full-of-crap black market dealer Hannibal Chau (Ron Pearlman), and the unrelenting Marshall Stacker Pentecost (Idris Elba) all play their roles with aplomb enough to make a well-made world even better.  Honestly, I want everything Idris Elba says in this movie put on a framed poster that simply shows him looking grim and determined.

I loved this movie – though I am aware of the problems it has.  For one, it dive-bombs the Bechdel Test – which I hesitantly call a film-making flaw, begins with a “here is the past up until now voiceover”, which is a style of intro that needs to be put to bed (though it actually bothered me much less than it normally does, which you can thank the amazing visuals for), and some of the acting, namely from Hunnam and Kikuchi, comes off stilted or flat. Despite it’s flaws – Pacific Rim does the necessary to rise above its bits and pieces to form into something inspiring, awesome, and great.  It imparts a glimpse at the never-surrendering spirit of humanity and the need to strive until there is no ground left to walk and when the ground runs out: leap.

Also, strangely enough, it has influenced my perspective on spacial awareness, as I’ve found myself pondering the importance of seeing yourself as small.  Not because being small would help me run and hide from the attacks of giant monsters, but because it makes me appreciate the idea of witnessing a gargantuan fighting armor suit all the more.

In this week’s viewing: Iron-Blooded Orphans awakens something centuries old, BBK/BRNK disturbs something much older, and more!

If It’s Not Fantasy or Science Fiction…