It’s season premiere time, so let’s set aside the continuing shows for a week to look at new stuff. (Space Brothers is taking the week off, anyway.) 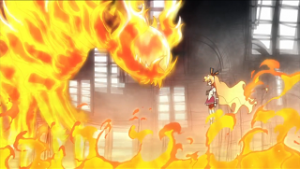 Day Break Illusion premiere – Akari Taiyō is an orphan schoolgirl living with relatives in a small town in Japan and working as a part-time apprentice tarot fortuneteller. On the second anniversary of her mother’s death, mysterious forces start to menace her, and she discovers she can summon supernatural powers to save herself and those she loves…

If there’s one thing that worries me here, it’s that the series has front-loaded itself too much and won’t have anything to do next week. By the end of the first episode, we’ve already seen two superpowered battles, one surprising death, and a jump to an alternate timeline. But it’s handling itself very well so far.

This is easily the most diverse series I’ve ever seen with a Japanese setting, in that one of the magical girls is black, Akari is implied to be a Christian, and one of her fortuneteller mentors is, so far, the second positive portrayal of a gay man I’ve seen in anime, unless you really want to count shōnen ai (about which more in the Makai Ōji review). 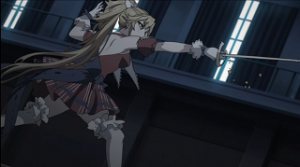 Fantasista Doll premiere – Uzume Ono is a schoolgirl and past Magic: The Gathering champion. One day, someone sneaks a pack of mysterious cards into her bookbag, and soon enough a strange girl shows up demanding them back. In the nick of time, Uzume answers an extensive questionnaire from a disembodied voice and is rewarded with the ability to use the cards to summon a defender.

At first blush, it all seems like a very paint-by-numbers setup intended to see a new trading-card game to kids. Until you start noticing stuff like number of shots composed so as to almost look up someone’s skirt, and how much time the summoned “dolls” spend nude, or how eager everyone is to go jump into the bath together. The target audience is not kids. It’s not even the well-adjusted male gaze. Give this one a miss. 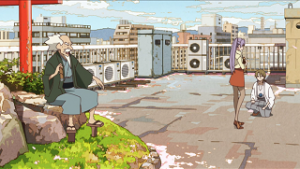 The Eccentric Family premiere – Yasaburō Shimogamo is a tanuki– a shapshifter whose true form is that of a raccoon dog— whose main ambition is to live an interesting life. As the story opens, he’s keeping it interesting by perfecting a new schoolgirl form, for which he is chastized by his oldest brother, because apparently even in a society of creatures which can assume any shape, gender swapping is just not done.

The Shimogamo family is beholden in some way to Professor Akadama, an elderly tengu (goblin) who is no longer able to fly due to a back injury. The professor tasks Yasaburo with delivering a love note to a young woman known to them as Benten, who is a human but has developed the power to float through the air under the professor’s tutelage.

So far, it’s light urban fantasy with a well-devloped setting. The art style, especially for backgrounds, is more flat and cartoony than average, but it gives the art character rather than detracting from it. 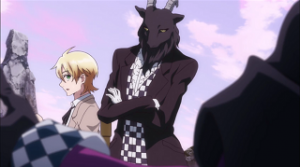 Makai Ōji: Devils and Realist premiere – King Solomon once banished a group of devils including the demon lord Dantalion, and the power to control demons has passed down through his line to late-teen British atheist William Twining. When his uncle loses the family fortune, William hurries home and finds a portal to Hell in the basement, which activates and brings forth Dantalion to start explaining the premise: Solomon’s power grants William the ability to choose an interim ruler of Hell while Lucifer is off taking a really long nap from which he cannot be roused.

Then William gets sucked into Hell through the portal. Dantalion rushes to rescue him, showing odd concern for a human. But, as the prologue has shown, Dantalion may have been in love with Solomon, and William is the spitting image of him.

What we have here appears to be an example of the genre known as shōnen ai, or literally “boys love”, which is gay romance, but aimed at a straight female audience. (Defenders of Fantasista Doll may argue that it’s all fine since women get someone to ogle too, but I’ll note that all the characters in this show are above the age of consent.)  If you like pretty boys in love, there’s your show. If you’re looking for stuff like plot, sorry, the premise is ridiculous, the tone seesaws between serious and wacky, and I can only imagine how distorted this particular version of Fairy Tale Britain looks to actual British people. 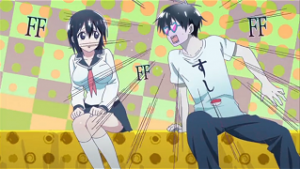 Blood Lad premiere – You can hardly go wrong giving a group of fans a story about people they can identify with. Thus have Slan, Galaxy Quest, and Among Others achieved lasting fame, and thus too will Blood Lad, about a vampire otaku, have an extremely profitable run. There’s really no percentage in discussing the story in detail; the point of the show is to have viewers go “Wow, cool!!” at every reference like Staz’s Naruto phone decoration or him going ballistic about how Final Fantasy is misnamed because it has sequels. Anyway, at the end, he’s off to Japan, where he can spend the rest of the series going on and on and on about how everything Japanese is just awesome. 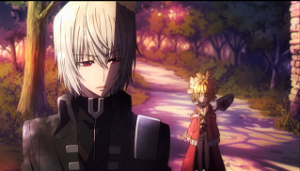 Sunday Without God premiere – One day, a voice from the heavens shouted, “The other side is full! … I’ve failed!” And thus God abandoned the world, after which there were no more births or deaths. But then the Gravekeepers came into being, and were able to put the would-be dead to some sort of rest by conducting burial ceremonies.

Ai has inherited the position of village Gravekeeper after the death (or what passes for it now) of her mother. Except, well, by the end of the episode, she’s learned that probably everything about her parentage is a lie, and the entire village is gone anyway…

It’s hard to put a rating on this yet. But if you like weird, it’s definitely a show you need to watch.

You know, there was a lot of feeling out there that this season was going to be lackluster, but so far it looks better than average. I’m keeping Day Break Illusion, The Eccentric Family, and Sunday Without God around for another week at least. How do they stack up against further premieres? Will the Daisuki player ever load and let me review Monogatari? Tune in next week!