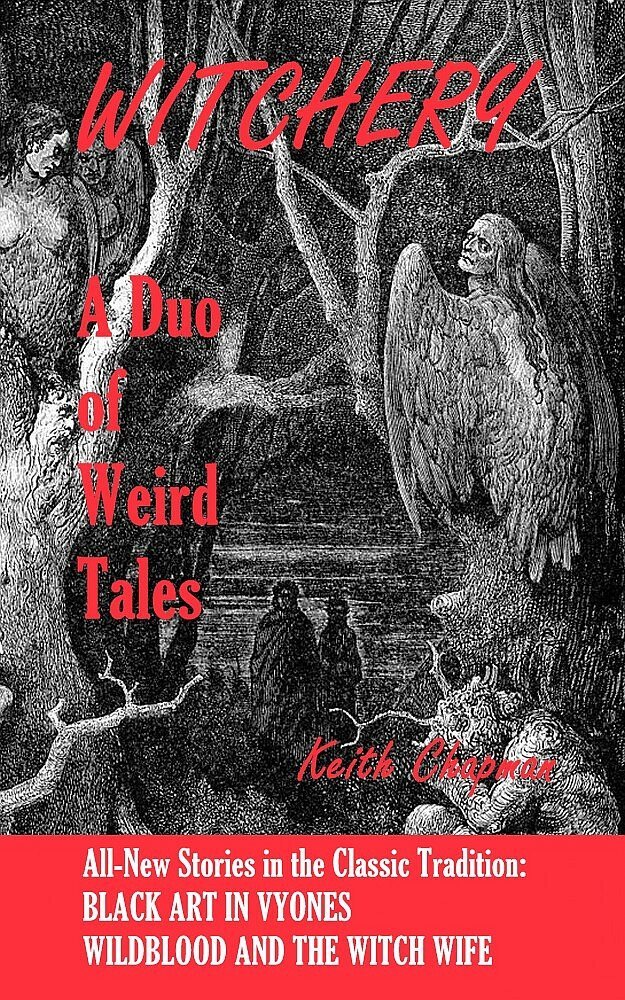 I’ve been on something of a pulp bent lately, especially Weird Tales type pulp. So I’m glad to mention there are a couple of stories that have just been released in ebook form that carry on that traditional, only with less purple prose.

The name Keith Chapman may not be familiar to many of you, but he’s published a number of westerns under the name Chap O’Keefe. They seem to be quite popular among fans of that genre, and I’m going to check them out. Don’t let the fact that the man’s primary output is in a different genre put you off from reading his work. As he explains in his introduction (a weird little tale in its own right), he’s a fan of the classic weird tale from way back.

The first story in the book is “Black Art in Vyones”. This is a homage to Clark Ashton Smith and is set in Smith’s fictional French province of Averoigne. It concerns a teenage boy named Alain who travels to the city of Vyones to apprentice to a master painter. The painter is said to mix his oils with esoteric ingredients which when spread on canvas will show the true personality of the subject painted. Alain arrives while the city is being terrorized by a harpy. Of course there’s a connection to the painter, although it might not be the one you think.

The second offering, “Wildblood and the Witch Wife”, is a sword and sorcery tale set in the century following the Norman invasion of England. The mercenary Wildblood and his companion the monk Radulf partake of a Baron’s hospitality after running off a small party laying siege to his castle. It turns out the attackers were sent by the wife of his estranged brother, a woman rumored to be a witch. And she has an interest in Wildblood.

These both entertaining stories, well done and enjoyable. Although I saw the ending coming in “Black Art”, I think I enjoyed it a bit more. “Wildblood” on the other hand surprised me with the direction it took. Neither story in my mind was like the other save that they both were fantasies that involved dark magic. Both of these stories were accepted by a well-known publication. Then later they were rejected by the editor so he could open up for more submissions. Chapman details what happened in his introduction. I’m going to refrain from any commentary here since I don’t want to put our publisher in an awkward spot. I’ll save those type of comments for my personal blog.

As far as production values go, this one was top notch. There were no formatting errors that I saw. The cover illustration is a good fit. I thought the price was a little low considering you got two stories and an introduction for dollar. That’s a better buy than many books this length.

I mentioned Mr. Chapman was known primarily as a writer of westerns. I wouldn’t complain if we decided to branch out and write more fantasy.

The relationship between speculative fiction and mainstream literary fiction is complicated by decades of group identity dynamics, mutual ignorance, and overbroad critical generalizations about both genres. However, if we try to put our long-held attitudes to one side and focus our attention on the works themselves, we find that the two genres are neither incompatible, […]

OpenAI Wants to Make Safe AI, but That May Be an Impossible Task

We’re searching for Planet X; news will return next week