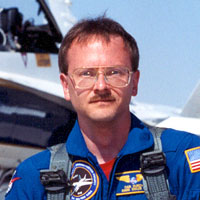 Dan Durda is a Renaissance Man.  Saying that invokes visions of the man as artist – painting, sculpture, close studies of perspective and perhaps human anatomy, but those visions fall far short of the reality that is Dan Durda.

He certainly is an artist of both the classical and digital variety, but he is also:

a pilot who loves to fly jets

a commercial astronaut candidate (soon to fly with SpaceShipTwo)

and the first person on the planet to crash two real asteroids* together to see what actually happens when they collide.

If that’s not enough to boggle your mind – he does art too, both classical and digital (though his turn to digital is relatively recent and greatly inspired by the film Avatar).

Planetary scientist, underwater cave explorer, astronaut candidate and space artist.  And through them all weaves the strain of a true explorer, the embodiment of what it means to be an adventurer, to grab a hold of a vision and ride it just to see where it may go.

Dan grew up in suburban Detroit and later rural Michigan.  He was always drawn to science, taking every course offered by a surprisingly well-rounded curriculum at his rural high school  Originally set on a career in Marine Biology, he caught the space bug from Carl Sagan’s PBS series Cosmos: “…Cosmos came out, and BOOM, that was it.”

While attending graduate school at the University of Florida, Gainesville, he made numerous 6 hour trips to Cape Canaveral to watch Shuttle launches (27 in all) with a friend, Dirk Terrell (a member and former President of the IAAA and now a colleague at the Southwest Research Institute);  together the two also explored many of Florida’s karst caverns and sinkholes, potentially dangerous cave dives.  The two attribute their success and safety to meticulous planning, skills that they bring to their coordination of the International Cave Rescue and Recovery team for Colorado and Arizona.

Meticulous planning, patience and an unquenchable desire to explore and investigate inform Dan’s current research, the quest for Vulcanoids – asteroids that orbit the Sun inside of Mercury’s orbit.  In order to find them, one must fly high at twilight, something Dan did on a regular basis, sitting in the back seat of an F18, piloted by NASA Test Pilots.  He’s a pilot himself and has been through NASA’a astronaut candidacy program, finishing in the top 3%.  But with NASA cutting back, Dan had to find another way to get into space, which he has done.  He’ll be flying with Virgin Galactic’s SpaceShipTwo and XCOR Aerospace’s Lynx suborbital research flights in the relatively near future.

Dan currently works for the Southwest Research Institute (SwRI);  earlier in his career, while conducting research into asteroidal impacts (including a paper on the Chicxulub impact – the Dino killer) at the University of Arizona, Dan became fascinated with space art, regularly visiting the NovaSpace Gallery in Tuscon, becoming an “annoying” visitor according to owner Kim Poor. “He would come into the gallery, but he never bought anything. He would just look closely at the paintings and leave.”

Dan was being true to form, examining and studying a future project with his patented meticulous attention to detail.  When Kim Poor finally got a peek at what Dan was painting – “…it was of professional quality.”

For a budding artist, Dan was at the right place at the right time; a colleague at Arizona, Bill Hartmann (also a space artist) and Kim Poor of Novaspace Galleries invited him to attend a space art workshop sponsored by the IAAA in Utah.  The workshop sought to place artists in physical locales that would provide inspiration and Dan found himself painting in Death Valley.

His original work is iconic; his depiction of Pluto and Charon was featured in Science (the Journal of the American Association for the Advancement of Science); others, including the depiction of a head-on collision between two asteroids, are widely recognized.

Dan began as a traditional artist, brush and pallet in hand, canvas before him.  A viewing of Cameron’s Avatar in 2009 changed all of that. “…I was almost speechless with awe at the artistic masterpiece I had just experienced.”  “I just had to learn to drive the digital tools used to make this movie.”

Awe is an appropriate word for Dan.  Awe at what he has accomplished, awe and wonder experienced when viewing his images, awe at what his future may bring.  Let’s just hope that he continues to share it all with us!

*samples of meteorites caused to impact in the laboratory

Dan provided numerous images for this retrospective of his art.  He has accompanied each with a bit of exposition, so from here on, we’ll allow Dan to speak for himself. (All images are Copyright Dan Durda and All Rights Reserved.)

Many thanks to Dan Durda for sharing his enormously exciting career and his artwork with us.  You can visit Dan and see more of his art at his personal gallery, at his  SwRI Gallery, on Cornucopia3D, check out a bit more on his background at NASA, view even more art at Nova Space Art Gallery, listen to him discuss a huge variety of topics on CoasttoCoast, and even pick up a calendar of his work at Cafe Press.

Once again, thanks to the members of the IAAA for participating in this showcase program.

Their name is Legion (a modest proposal)

When We Burn Books …

Just A League Of Bickering Clones