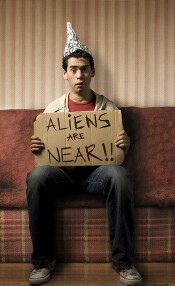 Today’s manhunt in Boston for the alleged Marathon bomber has pretty much buried yesterday’s story that NASA’s Kepler telescope has discovered three exoplanets that contain water and support life.

The discovery is interesting, of course, but to my mind a little sad because it’s highly unlikely that human beings will ever visit a star system that 1,200 light years away.  So if there’s life there, we’ll never know it.

Our best bet to actually finding out whether there is life on other planets is to continue to explore our own solar system. But when it comes to finding intelligent life, all we’ve got going are a handful of privately-funded SETI (Search for ExtraTerrestrial Intelligence) projects.

While I sympathize with the enthusiasm of the people involved in such projects, it seems to me that SETI is, as long shots go, an extraordinarily long one.  The problem, as I see it, is that it heavily depends to heavily upon the concept of parallel evolution.

Parallel evolution is an observable phenomenon on earth, with the best example being the emergence of similar animals among placentals and marsupials. The extinct Tasmanian Wolf, a marsupial, for instance, was not greatly different from the placental wolf.

Another good example are anteaters, pangolins, armadillos and aardvarks, all of whom have very different evolutionary ancestors but fill a similar ecological niche.

As I understand it, SETI assumes that that parallel evolution might operate all the way not through to the emergence of sophisticated technology.  It’s an interesting concept, but I’ve begun to question whether it makes much sense.

The reason is that I’ve been reading two books that couldn’t be further from SETI research: 1491 by Charles Mann and Collapse by Jared Diamond.

1491 is about the civilizations in the “New World” before the arrival of Columbus. Of the half-dozen or so centers of pre-Columbian civilization, only one independently developed writing.  Since there had been no meaningful contact between humans in Europe/Asia/Africa for at least 12,000 years, this represents an example of complex parallel cultural evolution.

What’s interesting, though, is that the Incas appear to have developed a completely different way of communicating non-verbally through the selection of different colors of string, tied into different types of knots.

Apparently, nobody has any idea how to even start to translate that method of communication. It’s simply too different from any other form of long-distance, non-verbal communication.

Remember, when comparing the Incan civilization to other civilizations elsewhere, we’re talking about the SAME species on the SAME planet with the SAME types of evolutionary pressures, and yet we end up with something that’s quite divergent.

On an exoplanet, even simple life would emerge with a very different set of evolutionary pressures, probably with twists and turns that wouldn’t happen on Earth.  If a civilization emerged, it seems to me that it’s a bit too “enthusiastic” to expect that such a civilization would use electromagnetic waves for communication in a manner than would be intelligible to humans.

I realize that SETI projects aren’t expecting to hear something like Klingon but instead something more like the series of prime numbers used as a marker in the movie Contact.

Even so, expecting something intelligible may be a lot to ask.

The other problem with SETI lies, I think, in the assumption that civilizations are likely to survive long enough to become “advanced” enough to make their presence known.

As the book Collapse explains, civilizations tend to fragile and impermanent, and that the kind of environmental pressure that we’re putting on the earth cannot be maintained for very much longer, especially since that demand is increasing geometrically.

This way of looking at civilization runs contrary to the “onward and upward” and “better living through science” trend that results in the kind of futuristic societies that appear in genre fiction.

Instead, when things break apart, they break apart hard–in starvation and mass killings–and often leave nothing other than ruins. Put another way, our civilization may not end up being “advanced” for more than a few centuries. 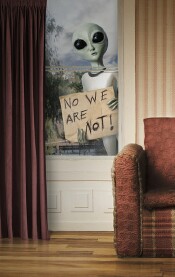 If civilization is inherently fragile, rather than a foregone conclusion of endless advancement, then the likelihood of finding another civilization within “listening” distance gets correspondingly small.

The window gets smaller, both for us and for “them.”

Don’t get me wrong.  The money spent on SETI is so small compared to other kinds of waste (including junk science) that such projects should continue and even have increased funding.

However, expecting such research to pay off may be like expecting to win a million dollar lottery ten times in a row.