Reading Michael D. Sellers’ fascinating book, John Carter and the Gods of Hollywood, we learn all the reasons why John Carter, Disney’s film version of Edgar Rice Burroughs’ A Princess of Mars, failed at the box office. This extensively researched volume finds there was a perfect storm of incompetence on the part of just about everyone involved in making and promoting the film. From top to bottom, from studio heads to publicists, just about everyone is given a portion of the blame.

The story that Sellers tells is not really new. Hollywood bungling the adaptation of popular novels to the screen has been going on since the motion picture industry began. What is new is the massive scale 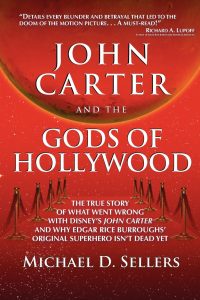 of this particular blunder, and the vast amounts of money that were involved. And even more serious, and perhaps sinister, are the huge forces that were working in the background as decisions were made more on the basis of corporate ambition rather than artistic concerns.

Sellers gives a preliminary rundown of events leading up to the decision in 2006 by Disney Studio chief Dick Cook to green light the film with Stanton as director. Prior to that Paramount had planned to make it, with helmsmen Kerry Conran, Robert Rodriquez, and Jon Favreau slated at different times. Various problems forced Paramount to give up on it, allowing Disney to acquire it. During the development process A-list actors were considered for the leads. Tom Cruise and Julia Roberts were attached at one time to play the title character and his love interest, the lovely Dejah Thoris. As time went on, with the script being rewritten by Michael Chabon, Stanton decided to eschew big names, and concentrate more on the story and the special effects needed.

A budget of $250 million was agreed to, putting it on a par with the most expensive movies ever made. Cook okayed it, and then basically let Stanton have free reign over the project. There was a lot of trust in Stanton who had never done a live-action film before. His previous animated hits, Wall-E and Finding Nemo were big box office winners, and no one doubted Stanton’s Carter film would make its money back. Well, except maybe Disney CEO Robert Iger, who seemed to have doubts from the beginning.

Cook was increasingly coming under fire from Iger, who publicly criticized him during a conference call to investors, saying the Disney movie studio was performing poorly compared to other parts of the corporation. But Sellers notes that at the time Iger was really more interested in finishing a deal that would result in the acquisition of Marvel Comics. Iger felt there was more box office potential with the Marvel characters than with John Carter, which had a much smaller fan base. The result was that Cook was fired, Disney acquired Marvel and at the same time Iger began courting George Lucas to acquire the Star Wars franchise.

Other factors cited by Sellers that resulted in the John Carter fiasco include the hiring of a marketing executive by the name of M. T. Karney, a New York executive who came to Disney from her own company. Iger hired her as someone savvy with social media, which he saw as the new way to promote films. It was her decision to drop “of Mars” from the films original title, “John Carter of Mars.” Sellers claims that this decision had a negative effect on the production, by cutting out the exotic context of the film, leaving people not familiar with the Burroughs novel wondering, “Who the heck is John Carter?” Karney, according to Sellers, did little to promote the film through social media and seemed more concerned with flying back to New York every weekend to be with the two children she’d left there. Karney and Disney soon parted ways.

To his credit Andrew Stanton, under Richard Ross, who replaced Cook as studio head, completed the film on time and on schedule, despite press reports that he had lost control and the budget went beyond expectations. None of that was true, Sellers writes. But what was true was that Stanton saw the John Carter story differently than the way Burroughs wrote it. In particular he changed Carter from the heroic swashbuckler of the novel to a Civil War veteran who was “damaged goods.” The hero was given a backstory about his having a wife and child killed while he was off fighting in the War, hence making him an embittered loser of sorts. Stanton also changed the opening of the story by giving a lengthy prologue that tried to provide a capsule version of Barsoomian history, leading up to Carter’s arrival.

The prologue was, in most everyone’s opinion, confusing and unnecessary. For old time fans of the book, the change in Carter’s character—a concession to current writing trends— undermined Burroughs theme of man’s innate heroism. There’s a lot more to the story. But in the end, the film had a poor opening weekend and never recovered from it. Iger declared a $200 million loss and fired Ross.

In addition to the detailed account of how the movie flopped, there is a very well-done beginning section about Burroughs life, and career, and a thoughtful analysis of his writing technique and what it is about his books that keeps them in print 100 years after they were written.

Reading the book is an engrossing experience–kind of like watching the Titanic heading toward that fateful iceberg. The only quibbles I have with the book are the number of typos, at least in the ebook version I was sent, and Sellers fan-boy approach—so much so that he is one of those spearheading a social media movement to convince Disney to produce not one but two more sequels. After all that he’s written here, after all the missteps that were taken, why in the world would anyone trust Disney to do justice to any further interpretations of Burroughs work? And why would they bother? Iger landed the Star Wars franchise. Good luck to J.J. Abrams.

John Carter and the Gods of Hollywood, by Michael Sellers, Universal Media, is available from Amazon.com.

The Drake Equation Adds Up