It’s easy to discuss authors for their contributions are evident. You just have to read the stories. The great editors are harder to corral, for the editor’s job is one of selection, guidance, subjective acts that may be hard to understand in hindsight. (For instance, all those men and women who rejected Dune by Frank Herbert, a Science Fiction series that broke best-selling records for genre fiction. In the end it was Chilton, a publisher of car repair manuals that took a chance.) Editors are human, but they are also key players in the success of individual authors and emerging genres.

Sword & Sorcery is no exception. A short list of editors were champions of heroic fantasy, helping to shape it, to keep it alive when trends would dash it against the rocks of fashion and caprice. The first, and perhaps more by happenstance than design, was Farnsworth Wright (1888-1940), editor of Weird Tales from 1924 to 1940. He held the post at “The Unique Magazine” for 17 years. He would be the man-at-the-helm in January 1929 when that first S&S tale, “The Shadow Kingdom” would appear with little fanfare. Wright’s tastes were varied, recognizing classic writers such as Poe, Balzac, Gaston Leroux, H. G. Wells and even Lucian of Samosata, the 2nd century Greek writer, while publishing rising stars such as H. P. Lovecraft (who had been offered Wright’s job in 1924), Robert Bloch, Edmond Hamilton, Ray Bradbury, Fritz Leiber, August Derleth, Clark Ashton Smith, etc. And of course, a young Texan named Robert E. Howard.

It has not been recorded what Wright thought of Sword & Sorcery for he died in 1940, before the explosion of heroic fantasy, before the coining of that term in the 1960s. We can only go by his choices as editor, which include the best of Kull, Bran Mak Morn, James Allison and Turlough O’Brien, and almost all of the original Conan the Cimmerian. (He only rejected one Conan story, “Gods of the North” which featured elements of rape in it. It appeared in the non-paying The Fantasy Fan in 1932). 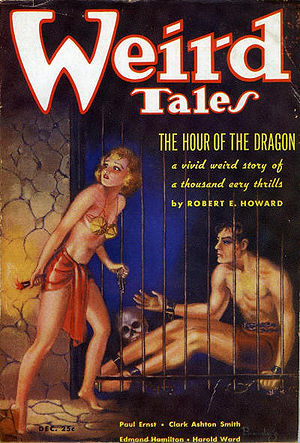 Along with Howard, he also published all of C. L. Moore’s Jirel of Joiry, dozens of fantasies by Clark Ashton Smith, many Edmond Hamilton tales based on mythology, “The Sapphire Siren” by Nictzin Dyalhis, Henry Kuttner’s Elak and the Conan-styled pastiches of Clifford Ball. Farnsworth Wright liked Fantasy, especially when it had some weird elements. He published at least four of the major influences on Sword & Sorcery (Robert E. Howard, C. L. Moore, Clark Ashton Smith and Henry Kuttner), setting the bar high. I had always thought that his replacement, Dorothy McIlwraith may not have felt the same way about Fantasy but Lin Carter writes in Imaginary Worlds (1973):

“There would probably have been more stories about Elak but Farnsworth Wright began discouraging ventures into Howardian heroica. He rejected, for instance, the earliest of Fritz Leiber’s Fafhrd and Grey Mouser stories; Leiber gave him the first look at them, one by one, and one by one he bounced them back to Leiber…”

What Wright’s reasons were for turning away from Fantasy are hard to say. He was nearing the end of his life, and his health may have affected his work. More likely the publishers may have instructed him to move toward more horror content. In the end, he died and Weird Tales gave up its exclusive on Sword & Sorcery. Henry Kuttner published his Prince Raynor series in Strange Tales (Weird Tales biggest competitor)  and Fritz Leiber took the two greatest swordsmen in all of Lankhmar to another home, and another editor.

The second of our important editors was an unlikely ally, John W. Campbell, who had re-invented Science Fiction in the pages of Astounding. He had taken the gadget-oriented tales of Gernsback’s Amazing Stories and the space opera of the earlier Clayton Astounding and turned it into serious literature with writers like Robert A. Heinlein, Isaac Asimov, Lester Del Rey and A. E. van Vogt. He also tried to do the same thing for Fantasy with a sister magazine called Unknown (later Unknown Worlds). In both magazines, Campbell promoted the idea of logically building aliens or magic. This style of Fantasy produced the Harold Shea stories by Fletcher Pratt and L. Sprague de Camp. (Not my cup-of-tea, and not really Sword & Sorcery.) Campbell refined what Weird Tales had started, heroic fantasy with well-built universes that hung together with seeming consistency. These included the tales of Fafhrd and Grey Mouser by Fritz Leiber that Wright rejected. Inspired more by E. R. Eddison’s classic The Worm Ouroboros (1922) and the gilded fantasies of James Branch Cabell, Leiber set the Howardian tale onto a new track, one that was far more interesting than the pastiches of Clifford Ball. 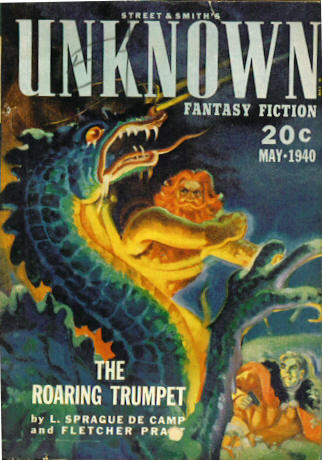 Other important Fantasy writers at Unknown included Norvell W. Page and his Wan Tengri novels, The Flame Winds (June 1939) and Sons of the Bear God (November 1939) that worked with the Howardian tale in longer form. Unknown only survived for thirty nine issues before wartime paper shortages forced Campbell to chose between his babies, but Campbell did publish more fantasy in Astounding in later years with Reign of Wizardry (1964) by Jack Williamson. John W. Campbell lead the way for future editors that would include Cele Goldsmith (who would get Fritz Leiber to resurrect his two best swordsmen in all of Lankhmar again for even greater glory), Ted White and Marion Zimmer Bradley in the decades to come.

Of Blacklists and Freedoms: DC, Superman and Orson Scott Card

Ever since Amazon announced it’s Amazon Select program (December 2011) the plethora of free books has significantly decreased the effectiveness of this type of promotion.

Apes in space…after that, what else do you need?

How To “Fix” the Hugo Awards (Updated)