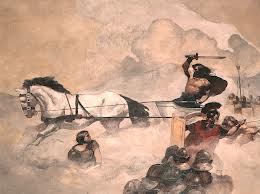 Robert E. Howard, more than anything, wanted to sell to Adventure Magazine. This publication of the Buttrick Co. was considered by many the best Pulp of all the hundreds of cheap magazines published between the 1920s and 1950s. It featured writers like Talbot Mundy, James Francis Dwyer, Rafael Sabatini, H. Bedford-Jones, Arthur Howden Smith, Arthur O. Friel and many others. E. Hoffman price, who wrote for Adventure, and was a friend of Howard’s, attributed REH’s failure to sell to the magazine to his lack of factual detail. Howard could make it up but he did not have the studious ability to research thoroughly.

Adventure’s loss was Fantasy’s gain. The stories that Howard wrote for Adventure would eventually end up in Weird Tales with fantastic elements added. In this way Howard inaugurated a second type of Sword & Sorcery, one set in a historical milieu, a type of Fantasy made famous by Adventure‘s greatest writer, Talbot Mundy in his mega-novel Tros of Samothrace (1925). This sprawling saga follows Tros, the exiled king of Samothrace, as he fights the Romans in the land of Britain. Mundy mixes history with supposition, theosophy and Arthuriana.

In this way, Howard modelled his hero Bran Mak Morn, the last true king of the Picts, not the tattooed Picts of Scottish history but Howard`s own version of the descendents of his Atlantean stories of King Kull and later the Conan saga. In Kull`s time the Picts are a barbarous race but strong, tall and proud. By Conan`s time they have sunk to a more savage existence but still powerful, invading Hyboria after Conan`s years. By the time the Romans bring their standards to northern Britain, the Picts have become stunted, bestial and degenerate. Only their king is still that true Pict that held Britain before the Celts came. 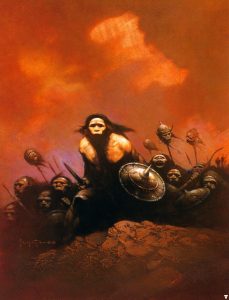 And it is in this dark vein that Howard tells of Bran Mak Morn and his people. Three stories stand out as classics but for different reasons. They are “The Kings of the Night”, “The Dark Man” and “Worms of the Earth”.

“Kings of the Night” (Weird Tales, Novembr 1930) is only marginally Sword & Sorcery for it features King Kull, torn through time by Ka-Nu`s sorcery. Besides a little time travel though, it is largely one of Howard`s Adventure stories he could not place. The Picts join forces with the Gaels and a band of Saxons against the Romans. The Northmen will only take part if the Picts can provide a warrior mighty enough to lead them. Enter Kull, Valusian king and tiger on the battlefield. Kull and his shield wall go up against the Romans and are slaughtered to the last man (besides Kull) in a desperate move to hold the Romans back long enough to trap them. It is an exciting battle tale with just a smattering of magic.

“The Dark Man” (Weird Tales, December 1931) is not a tale about Bran himself but one that showed his legend enduring long after his death. Still a historical tale, this one set in the 11th Century and featuring another series character, Turlough O’Brien. The Celt is captured by Vikings who have stolen a Pict statue of Bran Mak Morn and ultimately suffer for it. The Picts make one last appearance in this tale before fading off into the shadows of time.

“The Worms of the Earth” (Weird Tales, November 1932) is a horror tale with shades of H. G. Wells and Arthur Machen running through it. In his fight against the Romans, Bran Mak Morn seeks out a race even older and more sinister than the Picts, known as the Worms of the Earth. These degenerate crossbreeds are descended from the Serpent Men of Sword & Sorcery`s first story “The Shadow Kingdom”. They worship a Mythosian relic called the Black Stone. Bran steals the stone to force the Worms to kill a Roman consul. After his revenge, Bran wishes he would have never had dealings with the ancient evil for their taint is hard to forget.

Howard experimented with both straight historical fiction (The Sowers of Thunder, Road of Azrael) as well as his brand of historical fantasy first with Solomon Kane and later Bran Mak Morn. These stories have inspired later writers to tell tales both historical and fantastical from Norvell W. Page’s Wan Tengri novels set in the East to Poul Anderson`s stories of Scandanavia to Keith Taylor`s Bard series. The Sword & Sorcery writer has a choice. You can make it all up or you can try to please two masters, history and fantasy, and when it happens the result is a magic all its own.