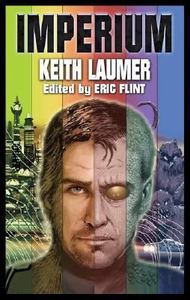 Imperium is a gathering of three Keith Laumer alternate-history novels, Worlds of the Imperium (1962), The Other Side of Time (1968), and Assignment in Nowhere (1968). Baen Books has been on the forefront of rehabilitating writers who in earlier eras did rather well in the field but who have since fallen by the wayside. (Andre Norton is their most significant author in this regard.) Baen is to be, first and foremost, congratulated for this.

Baen has been published Keith Laumer’s backlist for years and this volume of the Imperium stories involve a parallel reality policed by the Imperium forces who are headquartered are in a Stockholm where the American Revolution did not happen, and England and Germany have merged to rule the world. The three novels concern an American diplomat named Brion Bayard who is time-kidnaped by the Imperium because a Brion Bayard in a third parallel Earth is waging war against his abductors.

Confused? Join the club. It takes quite a while to sort things out and in the end it all seemed rather pointless.

Laumer didn’t invent the alternate worlds concept and in these three novels he makes little use of it. As Brion Bayard tries to make the best of his situation (the novels are mostly captures and escapes), Laumer fails to make effective use of the fact that his characters are in another reality. Nothing in Bayard’s adventures informs us of the worlds he inhabits. Yes, there are good guys and bad guys, but none of these characters seem to be products of their realities as are, say, the characters in Philip K. Dick’s The Man in the High Castle. Laumer’s characters are standard pulp creations that are going through the motions.

Perhaps part of the problem is that the narratives in each book are in the first person and there was nothing in Bayard’s character that suggested he was the kind of individual who would leave behind a written document of his adventures in these alternate realities. (This is a problem as well with Ben Bova’s Orion character. It’s like asking Conan the Barbarian to write down his memoirs. Very unlikely.) Bayard’s personality is flat his voice is 20th century middle-class American and the writing reflects a kind of matter-of-factness that doesn’t serve the story in any regard. By the end of the three books the reader doesn’t know anything at all about Bayard as a character or why he decides to stay in the alternate Imperium rather than his own real reality. In fact, it’s hard to recall what has happened in the novels when you reach the end. Not a good thing.

Laumer has written better. His main contribution to science fiction is his diplomat problem-solver Reteif and, of course, his indomitable Bolos. This book is Laumer in his lazy mode. His best writing can be found elsewhere.