Although I’m sure that there’s certain decorum for writing blog posts that prohibit fanboy type moments, I am choosing at this point-if such rules do exist- to completely ignore them. I do not have nearly enough verbage to clearly explain just how cool it is that I have been invited to be a part of the latest incarnation of AMAZING STORIES. It’s even made more incredible by the fact that I am making my contribution by writing about something that AMAZING STORIES is a part of –Pulp.

Pulp’s an interesting word, one that – although to me it feels as if I have had this very discussion multiple times in the last several years because I have- might need a bit of explaining before I can take you on the really fun ride that will be articles to come. 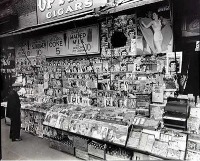 And let the following be a disclaimer. What you are about to read is NOT the definitive last word on what Pulp is. It is NOT an exact, diligently researched history or analysis of the subject. It is, in fact, an amalgam of all I have read, learned, heard, and believe about Pulp, encapsulated into a handful of words for you. And it’s also the conversation I generally carry near the surface so I can explain Pulp quickly, efficiently and move on to the aforementioned good stuff.

The word Pulp, in this case, has its origins not related to breakfast nourishment, but to wood. Paper can be produced from pulped wood and this paper is generally coarse, not the cleanest of whites (actually more of a, well, pulpy yellow), and doesn’t tend to hold up well with the passage of time. However, pulp paper was cheap to produce and Publishers at the turn of the 20th Century and slightly before were looking for just such a product. Publishers began using pulp paper to produce magazines that were chock full of stories written by a variety of writers, usually centered around a particular genre or subject, and then sold extremely cheaply to the masses.

Pulp Magazines, although around since about 1896, really came into their own due to one of the worst periods in America’s history- The Great Depression. When no one had money and entertainment suddenly became a premium, not a granted necessity, people began looking for cheap thrills, escapist fiction, and a way to spend a little and have fun at the same time. One answer to that for the working masses of the 1930s and 40s turned out to be Pulp magazines.

Every genre in the world hung from the wires at newsstand kiosks in the early 20th century thanks to Pulp Magazines. Western, Romance, Sports, Crime, Action, Jungle, and yes, probably most long lasting of all-although not the most popular genre based on sales of the period- the Hero Pulps. Fantastically over the top characters like Doc Savage, The Shadow, The Spider, The Avenger, The Black Bat, and hundreds and hundreds more erupted off those rough yellowed pages into the minds and imaginations of young and old alike. Such was their impact that not only did they inspire heroes that populated films and comic books, but many of these characters are still alive today, thanks to writers, creators, and publishers who grew up on the grandiose exploits of the Heroes of Pulp.

As all good things do, however, the era of the Pulp Magazine came to an end in the mid 1950s. The term and the type of stories continued on, however, applied to paperbacks and to the writings of such as Mickey Spillane, Louis L’Amour, Richard Prather and others. Pulp also came to typify rather lurid and sexually explicit paperbacks of the era. What Pulp really did, however, that was a trick worthy of any of the heroes of those classic pages, was sneak into the popular consciousness of America in such a way that it is not only still here today, but is strong and experiencing a renaissance like never before. 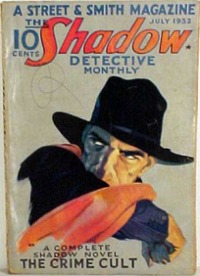 No longer does Pulp refer to the paper fast paced stories of heroes and villains were printed on, at least not exclusively. Pulp is now more style than medium, more method than sub genre. Pulp is in every aspect of entertainment. Modern Pulp TV? Watch Person of Interest or NCIS. Pulp in movies? Indiana Jones or even Die Hard anyone? Books, comics, film, audio drama, Pulp is in it all and, to be quite honest, has been in it all for quite a long time. Classic radio programs that aired at the same time Pulp magazines were popular were replete with pulpiness all their own. TV held onto that and films, although they along with their audiences became more sophisticated, hung onto their affair with the Pulp style well into modern times.

In short, Pulp is and- at least for quite a few decades if not longer- has been all around us in the popular culture we like to wrap ourselves in. And that’s what future blasts from this blog will be about. Pulp characters, classic and new. Pulp themes from the screen to the page and beyond. Mash ups, crossovers, rare characters with new tales, Pulp standards and what makes them work. We’ll talk about characters you’ve never heard of and call some of your favorites Pulp and explain why they are. Welcome to looking at Pulp a whole new way and in every nook and cranny.

And for the first time, You, my dear reader, have just been PULPED!

After Space Shuttle Discovery recovered from a dangerous launch abort in June 1984, the second try was flawless and spectacular.

EXTREMELY SHORT SUMMARY Lots of fans sign up for free memberships to read cool, fannish, free stuff: Advertisers pay to advertise: Ad revenue is used to fund a magazine:  The magazine purchases content from authors and artists:  The content is published on the site (and in print).  Member fans read it and see it all […]