By Michael A. Burstein

Very early in my writing career, I received a note back from Stanley Schmidt, then editor of Analog, on a story I had written. He liked the story and thought it had potential, but suggested that it needed more “zing.” I took his comment to a writer’s group on the now defunct GEnie network, seeking guidance regarding how to handle it. If Stan had said the story needed to be longer, or shorter, or had too many adjectives, I knew what I would have to do; I had no idea what to do with the lack of “zing.” 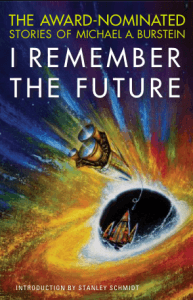 Robert J. Sawyer did what I should have done in the first place. He looked up the word “zing” in a dictionary and found something similar to what I just found on the Merriam-Webster website: “a quality that makes something exciting, interesting, etc.” Armed with that definition, Rob suggested that the story needed more action. If it’s a story that begins slowly, he said, move some sort of action to the start of the story. If it did start with action, he suggested, then tighten it up.

As it so happened, the story did have a slow beginning, because I opened it with a scientific discussion instead of the fatal explosion that happened in scene two. By moving the explosion up front, the story ended up being published in Analog and even appeared on the Hugo ballot that year. (If you want to know more, the story, “Broken Symmetry,” can be found in my Apex Publications collection I Remember the Future.)

I’ve been thinking a lot about that story ever since Steve Davidson announced this new print edition of Amazing Stories. I read Amazing Stories as a kid; the incarnations edited by George Scithers and Kim Mohan not only drew me in as a reader, but inspired me as I became a writer. Somewhere I still have the rejection letters from George Scithers for my two-page stories that sputtered out because all I had was an idea and nowhere to go with it. I’d like to think that they were killer ideas, at the very least. But it’s possible that perhaps, just perhaps, the real problem was that they weren’t amazing enough. So if I ever want to publish an original story in Amazing, perhaps I should do a similar analysis for the word “amazing” that Rob Sawyer once did for me for the word “zing.” 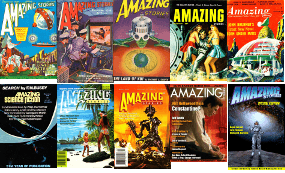 Going back to Merriam-Webster, we find that “amazing” means “causing amazement, great wonder, or surprise.” Leaving aside the problem of using the word “amazement” in the definition for “amazing,” we can focus on those other two words, “wonder” and “surprise.” Wonder, of course, is that feeling of awe or excitement you get when you realize that there is more to the world than you knew. Children have an almost innate sense of wonder, as everything is new to them; it’s only we jaded adults who think we’ve seen it all. As for surprise, that’s the feeling you get when something unexpected or unusual suddenly appears.

So if I want my stories to be amazing, what do they have to do? Quite simply, they have to show the reader something unexpected…that fills them with excitement or awe.

There’s a reason that so many early science-fiction magazines chose names such as Amazing, Astounding, and Fantastic. Science fiction fans want to be amazed. We know that the world is a fantastic place to live, even if it’s sometimes difficult to perceive on a mundane, daily basis. It’s hard to be amazed when your life seems constricted to your home, your office, and the parking lot.

But then something new and unexpected happens. And we find ourselves amazed again.

In the past, during the Golden Age of science fiction, fans were amazed by atomic power, the nuclear bomb, and the beginning of television. In my own “golden age” I was amazed by spaceships routinely orbiting the planet. Today we’re all constantly amazed by the power the Internet and our smart phones give us to communicate one-on-one with each other, halfway around the world, instantaneously.

As for tomorrow…well, what will amaze us tomorrow is what this magazine is all about.