Never trust an app in the form of a woman you don’t know, even if you are a hipster knight. A Gernsback Contest winning short story. 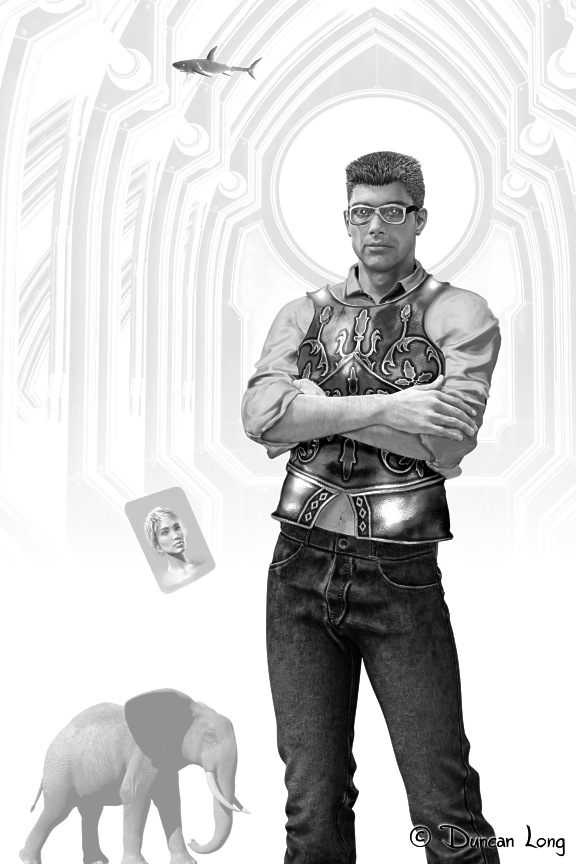 One could not fault the view. The Esplanade was nestled within a collapsed lava tube. The pedestrian mall ran a full two kilometers, from the broad stone steps of the Martian Grande, all the way to the Arthursville city hall. The roof overhead was a broad arch of delicate metal filigree and transparent spinel, and the early morning sky was a stunning shade of pale blue, etched with traces of peach.

Bob contemplated his croissant and still-steaming cup of coffee. The difficulty, of course, lay in how to get the coffee to his mouth, given the upturned hand that was perfectly positioned halfway between the two. He ignored the hand temporarily, as well as the indigent to whom it was attached, and turned his attention to his croissant, which he had neatly bisected and buttered. Both the plate and his cup were slightly too close to the wrong side of the table. He nudged them a few centimeters the other way, just in case, and frowned.

The beggar muttered something that Bob couldn’t catch. Bob sighed and looked up at him. Someone, clearly fancying themselves a wit, had tagged the beggar. Trillions of floating nanites created a label that read “Drunken Sophocles” that hovered above his head, as well as a stream of technicolored bubbles that appeared to float from out of his mouth, which he held slightly ajar. He had a long, tangled  beard, and wore what appeared to have once been a toga from a costume store.

Bob shook his head, and focused his attention once more on his coffee. The hand had been withdrawn, and he briefly considered whether drinking it would be considered somehow rude. He mentally shrugged, then reached for it regardless.

“Pediculus, flagitious quidnunc!” said Drunken Sophocles. Given that no money appeared to be forthcoming, he staggered away.

“Enlighten me,” said Bob. “What did that mean?”

“He called you a worthless, yellow-toothed, fork-tongued gasbag,” said the System AI, sounding amused. The voice, generated by artfully hidden speakers, and only audible to Bob, appeared to emanate from thin air. “He then referred to you as a lice-infested, villainous, busy-body. Clearly this is not an effective tactic when begging.”

Bob made a disgusted sound. “What language was that?”

“Mostly Latin,” said the AI. “Some ancient Greek. Those are dormant languages from the Mediterranean basin, circa two thousand years ago.”

“I may be a worthless gasbag,” said Bob. “But I’m not entirely uneducated.”

“Speaking of gas,” said the AI. “You’re behind on your air taxes. Unemployed, societally useless, almost entirely broke, and shortly about to be thrown off the planet.”

Bob felt his hair, which was actually rather short. “How am I supposed to do that?” he asked.

“I’m sure there’s a barber around here,” said the AI.

Bob sighed, and took a bite out of his croissant. It was as good as it appeared. He washed it down with a mouthful of coffee.

“There’s an app making the rounds that is supposedly good at finding employment for worthless, gasbag humans,” said the AI.

“I’m not sure about the lice though. You may want to bathe first.”

Bob finished his coffee and nibbled around the edges of his croissant. An application window, with a neat little border that framed a cartoon woman, manifested itself in front of him.

“Yup,” said the woman. “You actually do need an image make-over.”

Bob waved his hand to dismiss the window. “Spam,” he muttered.

“Actually the System AI said you needed a hand,” said the woman.

“Well look at yourself,” she replied.

He looked down. He wore a pair of skinny jeans, a t-shirt featuring an animated collage of corporate logos from the previous two centuries, and a thin cotton jacket. Neatly stacked on the ground next to his chair was an ancient-seeming metal breastplate that he had printed out the previous week, and a horned helmet that had caught his fancy in a pseudo-antique store. He wrinkled his nose and reached up to adjust his fake thick-rimmed glasses.

“Would you hire you?” the app said.

“Several of your friends have installed me,” she said.

“I can’t tell you that,” said the woman. “Confidentiality, you know. Maybe if you install me I can make an exception.”

“How do you install?” asked Bob. He scratched his ear absently.

“I can always uninstall after,” said Bob. “Okay, I’ll bite. Let’s see what you’ve got. Install.”

“Done,” said the woman. “Now let’s take a look at your educational history ”

“We’ll have time for all that later,” said the woman. “I’m going to have to do something about your educational records. That’s nearly as bad as ”

“Wait a second,” said Bob. “I didn’t give you permission to…”

“I’ve lined up a couple of interviews for you already,” said the woman. “I’m going to have to coach you a bit. We’ll need to skirt a little bit around the…”

“Two o’clock this afternoon,” said the app. It winked at him. “Here, take this.” A virtual sheet of paper appeared in the air next to Bob. “I gave you a mail-order doctorate. The institution is a bit obscure. You may have to talk around that point.”

“You don’t want to know what job this is for?”

“No,” said Bob. “What I want is another coffee, and then if I have enough money left over, I may fork out for a newspaper.”

“Tough love time,” said the app. It pointed a cartoon hand at him like a firearm, and made a clicking sound.

“Set you up on a date,” said the app. “I had to mess with your avatar a bit. Let’s face it, you’re a mess. We’d better get you some new clothes quickly. She’s coming by soon.”

Bob snapped his fingers in the air. “System AI,” he said. “I protest. This app is invading my privacy and won’t uninstall. That’s against the terms of service.”

“Did you read them?” said the System AI.

“You really should be careful about just installing new apps in your life,” said the AI.

“He isn’t careful about anything,” said the app.

“I am so,” said Bob. He had spent a significant amount of time carefully crafting his external persona. The breastplate alone had taken hours of research into medieval armor. And the logos on his shirt –

“Are you sure about that job?” said the AI. “It does require a bit of, well, maturity.”

“He’ll be okay with a bit of coaching,” said the app.

“Would you two please stop talking about me as if I wasn’t here” said Bob. “Stop. Uninstall. Remove,” he added.

“Well if it isn’t Robert ‘The Hipster’ Knight,” said a new voice.

“If it ain’t Minnie the Moocher,” said Bob. “That’s really all I need right about now.”

“You know each other?” asked the app.

“There’s only so many young people in Arthursville,” said the System AI. “They actually just broke up two days ago.”

“You know I rely utterly on System protocols for information,” said the app, accusingly. “If I’m unable to obtain proper data from System, then it’s garbage in, garbage out. If I’m being toyed with, you’ll hear from my legal representation –”

“You installed that app?” said Minnie. “How did you get suckered into doing that? I didn’t think even you were that idiotic.”

“The AI was pushing me to get a job,” said Bob. “It said that it knew the perfect app to help with my resume.” He briefly considered putting his head down on the table, and then possibly covering it with either his helmet or breastplate.

“I thought you didn’t want a job?” asked Minnie. “Hey,” she said, addressing the AI. “Are you trying to manipulate Bob into getting a job?”

“This is for the historical reenactment next month,” said the AI, sounding defensive. “He likes researching and printing out old junk. He would be an absolutely perfect fit.”

“You tricked him into installing that app,” said Minnie. “That. App.” She emphasized the periods between the words by poking her finger in the air each time. “If I’m not mistaken, this is the very same app that almost caused an actual riot on Luna last week.”

Bob took a deep breath and said “Minnie, I really don’t need you to ”

“You are going to hear from my ” said the app. Then it was gone.

Everyone was quiet for a few moments. Bob took off his glasses and rubbed his eyes absently. Minnie pulled over a chair from another table, reversed it, and then sat down on it backwards. She pulled a menu out of the air and started reading it intently.

“I thought you couldn’t stand him,” said the AI.

“I can’t,” she said. “He’s a lazy and inconsiderate jerk, and he has a horrible sense of fashion. That doesn’t mean I’m just going to let you walk ”

“Well,” said the System AI, clearly intending to get the last word in. “That is precisely why they pay me the big bucks!”

How Gaia and the Guardian Saved the World by Alex Shvartsman

The early years of fandom, and especially Worldcons, were wild and wonderful, featuring outsized personalities and innovations that are now standard features.

by Jack Clemons Wildcatter dropped onto Hawking a month ahead of perihelion. We slammed in after losing a brutal tug of war with the singularity that started when we closed to 60 klicks. I was in the cockpit running a spectrometry survey through the assayer ay-eye during our final approach. I’ve flown a lot of […]

When Our Heroes are Villains