In this week’s viewing: Higurashi demonstrates that being BFFs isn’t always the greatest, Attack on Titan explores diplomacy, and more! 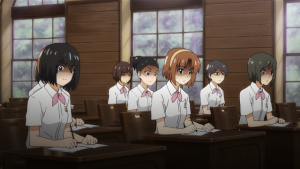 Higurashi: When They Cry – GOU #19 – Spending all of middle school cramming for the entrance exam to a fancy private academy is not Satoko’s idea of a good time, but she goes along with it because Rika is her friend and surely any minute now Rika will give up on this crazy idea. Then, somehow, it’s three years later, they’ve both passed the exam, and Satoko is being driven nuts by the demands of actually attending the academy and its passive-aggressive expulsion policy.

Rika is clearly having the time of her life (and considering how long she was trapped in the time loop, that’s saying something). But, just as Satoko will later try to subordinate Rika to her own wishes, dragging Satoko into this with her was clearly not one of Rika’s better ideas. Somehow they are going to have to accept that they can go their separate ways and still remain friends.

But for now, Satoko’s thoughts are taking a dark turn, as communicated by the sound of the cicadas. The original Japanese title of this franchise, Higurashi Naku no Koro ni, means “When the Night Cicadas Cry”. The return of that sound signals the return of the endless loop of horror. 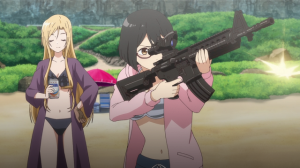 Otherside Picnic #7 – Sorawo and Toriko have washed up in Okinawa, land of tropical beaches, and Toriko isn’t leaving until she has a visit to the seaside. The Otherside intervenes, but it still has beaches, and anyplace can be a fun place as long as they have enough guns and beer.

Our heroines’ lives have become a constant loop of going to bars, getting dragged into the Otherside when they aren’t paying attention, escaping from the Otherside, going to more bars to celebrate their escape, and so on. At some point they might notice the ongoing correlation between getting drunk and winding up in the land of horrors. Then again, since this is cosmic horror, being drunk may actually be a plus. Also, this latest trip via the Otherside allowing them to get back to Tokyo with their private arsenal without having to confront Japan’s notoriously strict gun laws may have muted the lesson.

Still, you’d think Sorawo would think twice after having been so drunk that she didn’t remember (1) discovering being at the wrong end of Japan, (2) agreeing to a beach trip, (3) buying swimsuits, (4) checking into a hotel, (5) sleeping in the same bed as Toriko, and (6) whatever else was going on in those photos on her phone. 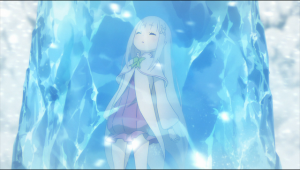 Re:ZERO -Starting Life in Another World- #44 – At least, Emilia’s flashback gets to the point: Pandora contrives to get her aunt killed, collects the now-insane Geuse as a henchman, and erases Emilia’s memories in an attempt to reset their relationship. Emilia learns that she never opened the ominious black door that should not be opened, but she did manage to convert all her remaining fellow forest folk to ice statues and throw herself into suspended animation.

That is a lot to confront, but Emilia is ready accept it and move forward. Besides, as she says, she probably has the power to go and unfreeze everyone again. And now she knows who her real enemy is.

There remains the question of who unfroze her, but that’s probably where Shima’s flashback intersects with her story. A larger issue is that there are two more trials to go and only half a season to cover them. Things are going to need to speed up a bit. 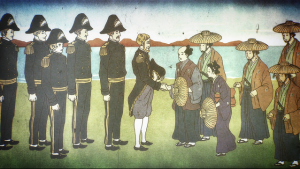 Attack on Titan #69 – Paradis is not entirely without friends in the world. Zeke’s network has reached the nation of Hizuru, which is eager to renew relations with the Eldians and recognize Mikasa as a lost princess. And maybe exploit its unique geological resources if Paradis would be so good as to sign a treaty becoming its vassal state.

So, there is no help coming from that direction. But the Hizuru emissaries do provide a little more information on Zeke’s grand plan. It involves a planned succession for the Beast and Founding Titans, the treaty with Hizuru, and then unleashing Paradis’s doomsday weapon just a little.

In addition to Hizuru being a dead end, no successor has been agreed for the Founding Titan, and Historia is willing the take the Beast Titan but has now developed an inconvenient pregnancy. As for the doomsday weapon— the rumbling, the release of the Titans within the walls to kill all of humanity for real this time— like a typical doomsday weapon, it may not have a “just a little” setting. And even if it did, if one attack on Marley was enough to get most of the world ready to unite and destroy Paradis, releasing the rumbling is unlikely to buy anything more than a temporary peace and even greater unity against them.

On top of all that, Eren’s friends among the Scouts are confronting the possibility that not only is he the most powerful being in the world at this point, he may also have gone mad. And if he has, there’s not much they can do to stop him. As he tells Hange, he’s just hanging around in prison because it suits him to do so for now. Even before he collected the War Hammer Titan, there was little hope of restraining him. They have to hope now that there is some method to his madness, that he’s pursuing some agenda which requires him to play along with Zeke for now. 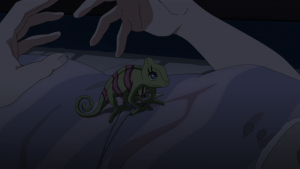 Wonder Egg Priority #6 – Mr. Sawaki’s visits have done nothing to persuade Ai to come back to school, but they’ve sure made an impression on her mother, who asks Ai’s permission to start dating her teacher. But somehow that, plus saving a psychic girl, plus acquiring an adorable little familiar, adds up to Ai suddenly deciding she will return to school after all.

That was one baffling decision that I hope will be explained next time. In other mysteries, Acca seems not entirely prepared for the Seenos to level up into Haters. He changes Ai’s mission objective when it happens, and he only belatedly brings in something that can counteract them.

Another one is Yae’s prayer beads. They’ve crossed into the real world… or were they there all along, and the dream world picked them up because Ai was familiar with them? If that’s the case, what about the other objects she’s fought the boss monsters with?

Finally, what is going on with Mr. Sawaki? Is it just, as Ai says, that she doesn’t know what he might have to do with Koito’s death? Or is her vehement insistence that she doesn’t have a crush on him hiding a real crush?

A recurring theme in Amazing Stories #5 is the alteration of the human mind.