As a longtime resident of Los Angeles, I am always drawn in by opening shots of the freeways deserted and overgrown with rampant ivy. 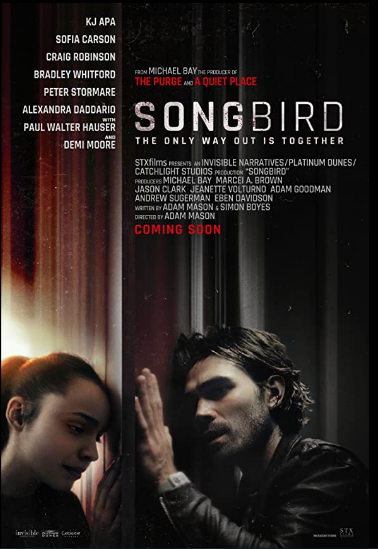 As an avid consumer of dystopian science fiction novels, TV shows and movies, I was eager to view “Songbird,” a new movie from Director Adam Mason and Michael Bay, the producer of “A Quiet Place” and “The Purge”.  Mason and Simon Boyes co-wrote the script. This movie was filmed over the summer of 2020 in Los Angeles and is touted as being the first movie to film and release following the shutdown.

Set in the near future when the even more deadly COVID-23 virus has arrived, the movie tells the story of Nico, a bicycle/motorcycle courier in Los Angeles racing against a deadline to save the woman he loves from one of the always dreaded quarantine camps. (Seriously, folks, if you find yourself in dystopia, make every effort to avoid being sent there because no one ever comes out).

I approached the movie purely as a movie, not as a vehicle to carry deeper messages to me about society, our pandemic issues or what’s going on currently in our world. To do this review I asked myself whether it was a good science fiction movie in the tradition of such things?

As a longtime resident of Los Angeles, I am always drawn in by opening shots of the freeways deserted and overgrown with rampant ivy. I get my bowl of popcorn and settle back to have 85 minutes of diversion from my own reality.  At times watching this film, I felt it could almost be taking place today, although the film makers were quite good at extrapolating current events and taking things one or two steps further. And the way the main character gets to zip around an empty LA is everyone’s secret dream.

COVID-23 is so deadly that literally everyone now lives in perpetual lockdown, except for the very few “munis,” or people immune to the virus, of which Nico (K. J. Apa) is one. His previous career as a paralegal putting himself through law school has fallen by the wayside along with society crumbling and now he does contactless delivery of all kinds of things, some legal and some not, or so we infer, for his boss Lester (Craig Robinson). His job takes app-based independent contractor work one step further.

You’d think the munis would be living the great life but no, COVID-23 is more easily spread on clothing or objects than earlier variations and so Nico like everyone else has to radically social distance lest he give the disease to those he cares for. Top of the list would be his girlfriend Sara (Sophia Carson), who he’s never actually met in person, although they’ve poignantly talked through her closed door and constantly chat and share on their cell phones. Sara is luminous – I thought she was a wonderful heroine – and Nico is stalwart, determined and scruffily handsome with a great leather jacket. In my opinion the actors made the romance work and I was invested in these two characters.

There’s a subplot, with Piper (Demi Moore) as a rich socially distanced housewife muni going all mama bear to protect her immune challenged daughter from catching COVD-23. In this she’s assisted by her sleazy record producer husband, William (Bradley Whitford). The subplot comes front and center as the movie progresses and Ms. Moore took me through the spectrum of emotion as far as wanting to like her, distrusting her, hating her, admiring her cunning….I wouldn’t mind a sequel with her in the lead, frankly. She went a little over the top for my taste a few times but her astringent character was a good counterpoint.

The actual songbird is May (Alexandra Daddario), stuck at the Pink motel. Following her improbable dreams of being a singer only to arrive in LA at a particularly bad time leaves her locked down in the motel, left to eke out a living online in various ways, some pretty sketchy. Guess who her record producer was? I’m not sure why her dilemma gave the movie its title but okay. As I indicated above, symbolism is largely wasted on me. I wanted more of Dozer (Paul Walter Hauser), her disabled Afghanistan veteran online friend. He was a great character!

The technology includes a mandatory temperature and virus check every morning via your cellphone, which automatically reports you to the Department of Sanitation (DOS) if you fail. You’ll never look at your local DOS workers in quite the same way again, I promise you. When the creepy pre-recorded government voice tells you “We are here to help” as the armored vehicles roll up,you know you’re in trouble. Oh right, here comes the “You will be shot on sight” warning. Don’t step out of that house unless you have the magical muni yellow bracelet.

There was also a whiz bang contactless, UV sterilizing ‘parcel box’ at every single house and apartment and I want one of those. What a great idea! I did wonder who paid for all these boxes, including the ones in the lower income residences but that’s a quibble. I thought the movie raised more than a few questions of that nature, as to how the world was continuing on if everyone was in lockdown and only munis, hazmat-clad DOS workers, the police and the military could go outside. No one seemed to be in danger of not having enough food for one thing even if we never saw anyone delivering it, much less growing or packaging it. I had to suspend my larger world building questions eventually. This is not a movie fraught with futuristic tech or explanations.

The story was predictable in many ways, although some of the basic plot tropes took an unexpected twist, which was refreshing (no spoilers from me), especially around the Demi Moore character. Other things went down about as any viewer of many gritty cop and crime movies or shows will expect. I thought there were two or three places where the writers solved their plot problems with an unsupported easy fix. (Hello, random guy living in a parking garage with your AR-15, who pops in for about five minutes to proactively resolve one problem and is never seen again.) And no bad guy in the entire history of villainy has ever handed over his wares/started delivering his nefarious services without seeing the money first. That point particularly annoyed me. C’mon, guys.

The two villains were over the top, even for LA. The actress (Lia McHugh) playing the immune-suppressed daughter cried beautifully but when you find yourself wondering how she could generate all those floods of perfect tears on command, the movie is failing to carry you along in its story telling in my opinion. I did check my watch two or three times during the 85 minute run time, which is usually the kiss of death for me on whether I’ll end up liking the movie overall…but the final half hour or so is quite intense, high stakes and I stayed with it.

I’d give it a C+/B-, mostly because I loved the hero and heroine (and those actors), the ending largely satisfied me and I give the creators credit for finding ways to film and release a movie during the pandemic. Would I watch it again? The beginning, which sets up the situation, and the last half hour…maybe.

Strange Exit is a flowing read that thrums with tension.