The first human to fly into space was Russian Cosmonaut Yuri Gagarin, who launched from Baikonur in the Kazakhstan Soviet Socialist Republic on April 21, 1961. The US followed up with the launch on May 5 with a suborbital flight by Alan B. Shepard. On July 21, Gus Grissom would join their small club and also gave rise to the legend of the space smuggler.

Given that the American astronauts were selected to test a new type of craft that essentially placed them on top of missiles filled with highly explosive chemicals, it might be a surprise to learn that they were not paid particularly well by the United States government. The Mercury Seven were paid a salary between $8,330 and $12,770 per year (approximately $73,800 to $113,160 in 2019). They made additional money by “writing” articles for Life magazine, among others. Gus Grissom decided to supplement his income by taking a few rolls of Mercury dimes on his flight and selling them to collectors after he returned. While many of the dimes sank with his capsule, the Liberty Bell 7, he managed to keep some that he had secreted in his space suit (one of the dimes sold at auction in 2013 for $1,513).

Grissom was also involved in the next highly publicized case of space smuggling. On March 23, 1965, Gus Grissom launched into space on Gemini 3 in a capsule named the Molly Brown, a nod to his sunken Liberty Bell 7. NASA, never issued an official sense of humor, was not amused at his naming choice and decreed that subsequent capsule should not have nicknames, which held up until the Apollo tests of the lunar lander, when having two spacecraft more or less required multiple names. Grissom’s partner on the first two-man launch was rookie astronaut John Young. Shortly before walking out to the launch stack, astronaut Wally Schirra handed a small package to Young. The official transcript of the mission includes this exchange from just shy of two hours into the six hour flight:

Grissom: “Where did that come from?”

Young: “I brought it with me. Let’s see how it tastes. Smells, doesn’t it?”

Grissom: “Yes, it’s breaking up. I’m going to stick it in my pocket.”

Grissom: “Pretty good, though, if it would just hold together.”

One of the problems was that the crumbs of rye bread began floating around the capsule, which could cause issues if they lodged behind any of the myriad switches. To this day, bread does not fly into space, instead astronauts make do with tortillas.

The sandwich eaten by Grissom and Young came from a deli called Wolfy’s that was located in the Cocoa Beach Ramada Inn. In his memoir, Young noted that it was missing mustard.

Unfortunately, NASA’s lack of humor caught up to the astronauts and the US House of Representatives called several NASA officials to testify in front of the House Committee on Appropriations, with one member referring to the “$30 million sandwich.” NASA associate administrator George Mueller declared “We have taken steps to prevent recurrence of corned beef sandwiches in future flights.” However, demonstrating that NASA had been issued a sense of humor, the first official corned beef sandwich eventually flew into space on the first shuttle flight in 1981, a flight commanded by John Young.

The first mission to orbit the moon was the Apollo 8 mission on December 24 and 25, 1968. Knowing that the crew would be in orbit around the Moon on Christmas, NASA wanted to make sure that they had an appropriate Christmas dinner and provided dehydrated versions of the appropriate foods. Deke Slayton went a step further, and despite an official no-alcohol policy, he slipped in three mini bottles of Coronet Brandy for the crew to enjoy. Frank Borman, however, confiscated the bottles explaining that if there was any subsequent problem with the space craft, it would be blamed on the men drinking the brandy. In a 2019 article, space writer Jeffrey Kluger claimed that all three men (it is the only Apollo crew with all its members still alive) still have their unopened bottle of brandy.

While in orbit on Christmas, Borman, Jim Lovell, and William Anders commemorated the event with a reading of the opening of the book of Genesis.

After they landed, NASA was sued by Madalyn Murray O’Hair for violating the First Amendment’s guarantee of separation of Church and State. Although the case was rejected by the U.S. Supreme Court, NASA became skittish about displays of faith in space.

While Grissom and Young were both on their first flights when they joined the space smugglers’ club, Buzz Aldrin was on his second flight. Aldrin was scheduled to be the second man to walk on the surface of the moon if everything went well on the Apollo 11 mission. Unlike Grissom and Young, Aldrin had permission to smuggle his contraband aboard in his personal preference kit (PPK), a carefully weighed container of personal items and souvenirs astronauts were permitted to carry into space. What made Aldrin a smuggler was that his objects were specifically not meant to be known by the public at large.

Aldrin’s faith was very important to him and he had received a small plastic container of wine and a bit of wafer to bring with him to the moon, along with permission to administer Holy Communion to himself. Aldrin had planned to share the moment with the world, but Deke Slayton, who ran the Astronaut office told him, “Go ahead and have communion, but keep your comments more general,” concerned that O’Hair, or someone similar, would cause more trouble.

The transcript records that Aldrin said, “I would like to request a few moments of silence…and to invite each person listening in, wherever and whomever they may be, to pause for a moment and contemplate the events of the past few hours, and to give thanks in his or her own way.” Aldrin then cut his mic, read a passage from the Gospel of John, and took Holy Communion.

The wine and wafer for the communion were not the only contraband foods on Apollo 11. A few weeks prior to launch, Neil Armstrong had asked one of the engineers, Lou Ramon, to arrange to add a couple of rolls of Life Savers to their food packets. Lou checked with the dietician, Rita Rapp, and was told that she had no objections to the addition. However, the safety office was afraid that if the astronauts bit down on the candy in the pure oxygen atmosphere of the lunar lander it could cause a spark and ignite a fire. Ramon told Armstrong that it couldn’t be done and Armstrong expressed his disappointment. Ramon made Armstrong promise that if he could get the candy into the lunar lander, Armstrong and Aldrin would only suck on the mints, not bite them. A couple nights later, after the food packets had been loaded onto the lunar lander, Ramon snuck on board, sliced open the foot packets, and stashed two rolls of Life Savers on board for the astronauts to suck on during their time on the moon.

A few months after Apollo 11 landed on the moon, Pete Conrad and Alan Bean made the second lunar landing. During their EVA, the astronauts had multipage checklists attached to their glove cuffs and they worked their way through them. Unknown to Conrad and Bean, David Scott had purchased a Playboy calendar and arranged to have the centerfolds from September and October 1967 (Angela Dorian and Reagan Wilson) copied onto fireproof paper and inserted into the checklists. Much as with the bottles of brandy and Aldrin’s

communion, Conrad and Bean kept quiet about their discovery, although their laughter and giggling about the discovery led some on earth to believe they were suffering from some sort of space drunkenness. Upon return to earth, they remained quiet about the pictures, although several years later, Conrad realized that in one of the widely published photos of himself on the moon, his checklist happened to be open to a page showing Reagan Wilson.

The Apollo flights included first day covers, postcards with stamps on them, which could later be sold to collectors. Prior to the flight of Apollo 15, however, the crew, David Scott, Al Worden, and Jim Irwin, met with a friend, Horst Eiermann, who proposed that in addition to the NASA approved covers, they would also carry an additional 100 covers for a German stamp broker, Hermann Sieger. Sieger would pay the astronauts $7,000 a piece and agreed not to sell the covers until after the Apollo program ended. The astronauts decided to carry an additional 100 covers per astronaut. The night before launch, the covers were vacuum packed and sealed in fireproof fiberglass at the Manned Spacecraft Operations Building and given to Scott, who put them in a pocket of his space suit. Through an oversight, these covers were not logged as being part of Scott’s PPK. The Apollo 15 astronauts carried a total of 641 covers to the moon, 243 authorized by NASA (including one signed by Orville Wright) and 398 unauthorized.

After returning from the moon, Sieger’s 100 covers were sent to him in Germany. Sieger began selling them almost immediately, which led to a congressional inquiry. Scott, Worden, and Irwin returned the money Sieger had paid them, NASA confiscated the covers that they had brought for themselves, and all three men were suspended from flight status. NASA also passed new rules prohibiting astronauts from carrying anything in exchange for payment. The confiscated covers were turned over to the National Archives.

In December of 2020, Richard Garriott admitted that he smuggled something to the International Space Station when he flew as a private astronaut in October, 2008. Three years earlier, on July 20, 2005 (the 36th anniversary of the first lunar landing), Canadian actor James Montgomery Doohan had died. The ISS engineering team decided that they wanted to honor the actor, who portrayed Montgomery “Scotty” Scott on Star Trek. They contacted Doohan’s family and made arrangements to obtain some of Doohan’s ashes. The family agreed and the ashes were encased in a small slab of resin. Once aboard the space station, the resin was hidden under the floor cladding in the international space station. 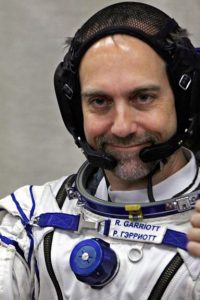 Richard Garriott was not the first astronaut in his family, nor even the first space smuggler in his family. Well, sort of. His father Owen Garriott was an astronaut who flew on the Skylab 3 mission. On September 10, 1973, CAPCOM (capsule communication) Bob Crippen, who wouldn’t fly in space until the first shuttle flight, with John Young, heard a woman calling him by name from the space station. It was Helen Garriott, wife of astronaut Owen Garriott and she explained “The boys haven’t had a home-cooked meal in so long I thought I’d bring one up.” Helen spent a several minutes talking to Bob and telling him about the forest fires she could see from space, the way the sunrise looked, and other bits of orbital sightseeing before she said, “Oh oh. I have to cut off now. I think the boys are floating up here toward the command module and I’m not supposed to be talking to you.” Garriott later admitted that he had Helen record her side of the conversation on a cassette tape he brought up with him so he could play a prank on Crippen at the appropriate time.

There are reports of other items smuggled on board various flights, although it is unclear what items were included as part of astronaut’s PPKs and what were actually smuggled. The ISS has a sizable complement of nerf guns, there are rumors of a Barney costume, and John Young (who keeps popping up) carried pliers on the Gemini 10 mission after he was officially refused permission.