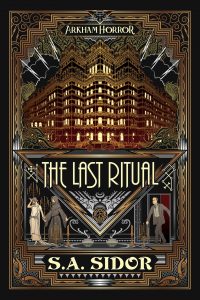 Firmly embedded in the pulp fiction tradition but without the dense, heavy prose of H.P. Lovecraft – no slavish Lovecraftian stylings here – Sidor’s The Last Ritual (Aconyte Books) is closer in spirit to the likes of Dashiell Hammet and Raymond Chandler than anything else.

Aspiring painter Alden Oakes is invited to join a mysterious art commune in Arkham called the New Colony.  A major artist whom Alden admires, Juan Hugo Balthazarr visits the colony, and the other artists soon fall under his charismatic spell.

In this 1920s decadent setting which would not be out of place in an F. Scott Fitzgerald novel, Balthazarr throws a string of decadent parties for Arkham’s social elite. The surrealist art maester starts to conjure arcane illusions which blur the boundaries between nightmare and reality.

Subtly and slowly, the other-worldly elements creep into Alden’s perceptions, including a tangle of fishing equipment with tentacled substance which he cannot quite bring into focus but which becomes the first subject in a series of increasingly-brilliant paintings.

Alden and his love interest, Nina, discover in a semi-hidden observatory a decapitated body of someone Alden believes he knows. But later, they realise the body has gone missing. Which draws us into a kind of detective story with scattered clues and sleight of hand which leaves the reader doubting the narrative and the artist’s perceptions. I love a good unreliable narrator, which is one of the aspects of this novel that utterly held my attention, more perhaps that the shadowy monsters and cosmic horrors that are mostly suggested rather than described in any detail until almost the end of the novel.

I enjoyed the rhythm of this work, too. Drawing on a stylistic device going back to the likes of MR James and others, the springboard is an interview with the artist by a journalist, and it is that dynamic which sets the tone for what’s to follow. Fact or fiction, reportage or editorial? We, as the readers are never sure, and certainly the journalist has major doubts about the nightmarish, surrealistic and impossible supernatural tale the artist recounts. On the other hand, unsubstantiated “facts” rarely get in the way of a newspaper story (an exaggeration, of course, but I speak as a former journalist myself!).

Balthazarr appears to have set himself up as a messiah of sorts, despising the nature of reality as it stands and promoting a deeply disturbing alternative, with its suggestions of immortality, but also abnegation of any kind of morality or belief in the human spirit. Without specifically naming the cult of Cthulu, this is essential what’s at work here. The final party in which the door to the other world is opened, is as unsettling and disturbing as anything that Lovecraft himself wrote.

I felt that what makes the novel work so well is its grounding in reality, the sometimes smug and self-satisfied community of well-heeled artists having the rug pulled from underneath them, the crime fiction thread and the interesting and complex central characters who lead us through a complex, gripping roller coaster ride in spite of its length. There were moments, to be fair, that the novel seemed to be lengthy but but the end I appreciated that it was its length (some 350 pages or so) that helped to give it the gravity and space for character and story development it needed.