In this week’s viewing: Victims keep lining up for Talentless Nana, Yashahime has a high body count for a show aimed at the younger set, Jujutsu Kaisen makes good on last week’s promise, and more! 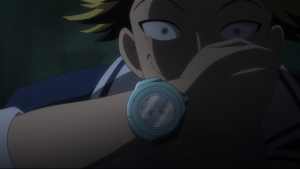 Talentless Nana #5 – Hatadaira is a fatalistic fool, but not quite enough of a fool to make the job of killing him easy. Circumstances also conspire to make every one of Hatadaira Tsunekichi’s predictions come true, and it’s only be exploiting the gaps between them and Hatadaira’s gullibility that Nana wins out. Just in time for the prediction about Kyōya and Inukai walking in as she’s standing over his body to come true.

Nana’s life has become one big high-stakes game of Whac-A-Mole. As soon as she disposes of one inconvenient witness, another pops up. Just when she’s finally dealt with Hatadaira, Inukai gets hold of one the most damning one and now Nana needs to do something about her.

And just how far do Inukai’s healing powers extend? Even without the dead giveaway (so to speak) of the next episode title, Nana has to have thought there was something odd about Inukai wanting to try “one more thing” when everyone had already agreed that Hatadaira was dead. 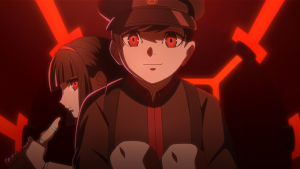 Akudama Drive #4 – Despite the inconvenient reappearance of the Executioners, the Akudama hack their way all the way up to the vault at the front of the Shinkansen. Too late to avoid the Absolute Quarantine Zone, but they do manage to reveal its contents. Or rather, its inmates.

So what they’ve been up to is really a prison break, masterminded by one of the inmates himself. This just leaves a million questions about who these kids are, why they’re being shipped to Kanto, how long they’ve had to set up their rescue, and how the one kid decided the best way out was to dangle a prize in front of a bunch of insane criminals. Okay, I guess that last part can be partially explained by youthful judgement. But the rest…

At least everyone has some time to talk it over while they’re safe for a bit, provided the word “safe” can be applied to being marooned on half a train inside a shield of unknown provenance inside a zone where even space may not be working correctly. How do they get back? Or do they move onward to Kanto? The fact that there are passenger cars suggests that the business about complete eradication of organic material may not be entirely correct. 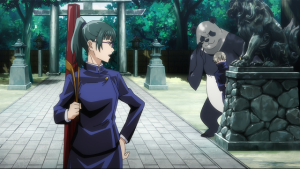 Jujutsu Kaisen #5 – Yūji apparently can’t get his body back from Sukuna, and to make sure, Sukuna renders the body unusuable by living beings. This doesn’t stop Fushiguro from pulling Yūji back into control with a speech about his inmost motivations, but it does render Yūji rather awkwardly dead afterwards. But, soon the remaining first-year students are yukking it up with the wacky second-years.

Tonal whiplash is an unfortunate side effect of faithful manga adaptations. If the show needs to get through a certain number of chapters in a certain number of episodes with minimal story changes, it means that sometimes a dark chapter and a light one are going to get mashed together in the same episode.

Yūji being the main character, we can have every expectation that he’ll be getting over his case of death soon, but he may need some help at this point. The usual way this works in shōnen manga is that the hero would tip just over the brink of death but power right back and regrow his heart thanks to his indomintable spirit. As it’s been a day or two, someone might need to step in with a ritual or something. 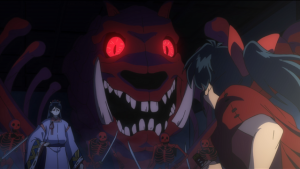 Yashahime: Princess Half-Demon #5 – Accepting that they’re stuck in one era for a while, Setsuna and Moroha resume their old ways, which immediately bring them back together to attack the same target. This leads to new revelations about the girls’ powers, including Moroha’s alternate artifact-induced personality and Tōwa’s ability to make any chance at a bounty evaporate.

The most baffling part of this whole episode is how long it takes Tōwa to accept that if you are facing someone who has been going around pulling people’s skeletons out of their bodies, and then they reanimate all of them into an undead army as well as raising a major demon, you don’t actually have to worry about who needs to apologize to who about any misunderstandings, you can just go ahead and start smiting them. I get that Tōwa is supposed to be the level-headed one, but that got ridiculous.

To the myssteries already facing the heroines, we add another one: Who initially decapitated Tōkotsu? Moroha’s assumption that it was her is understandable once we see how her transformation into Beniyasha works, but still, she sounds unsure about it. You’d think she’d remember something about confronting Tōkotsu beforehand. 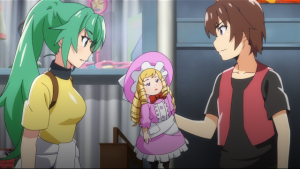 Higurashi: When They Cry – GOU #5 – It’s a new timeline, but Keiichi is still the worst in his school club. Being forced to play a totally chance-based game in a tournament serves as an illustration both of how he can never catch a break, and why Eurogames will be sweeping the world someday. Unfortunately, that doesn’t happen until the mid-1990s, and Keiichi may be trapped in 1983 forever.

Since the club is up to something totally different this time, the beginning of the time loop must be further back, with the story just picking it up as things get interesting. This time through, Rika is pushing Keiichi closer to Mion. It looks sweet for now, but just remember what happened after Rika encouraged him to trust Rena.

Mion’s apparently spontaneous invention of a twin sister would be fun in a comedy but is deeply ominous in a horror story. Maybe she really does have a twin sister that none of her classmates have never met. (There is that scene in the closing credits where there appear to be two of her, after all.) Or she used to have one. Or she’s got an alternate personality, or so many other possibilities.

Who (right!) was the BEST Doctor? Pertwee? Baker? Baker? Eccleston? Hartnell? I don’t know, but according to Abbot, he’s on first base!

“Rainbow Meteorite” May Carry the Building Blocks of Life