In this week’s viewing: Higurashi introduces its protagonist to a most unusual ritual, Yashahime thinks you can get a little too invested in prayer, and more! 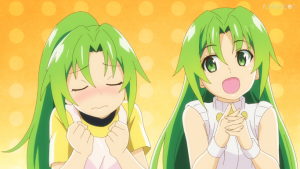 Higurashi: When They Cry – GOU #6 – Life ambles onward as Keiichi learns more about Mion’s life and family, and the special fellowship felt by the entire village. There’s that spooky legend about Oyashiro’s curse, but he thinks nothing of it, especially when he’s suddenly being led into a mysterious temple building under dark of night and people are making comments about him having chosen freely and does anyone else have the feeling that this was a very bad decision?

Keiichi also completely fails to notice a crucial theme in the villagers’ tendency to stand up for each other: both the bullies and the people building the dam were outsiders. Which means that he, as a recent arrival, is likely to be pretty high on the enemies list himself. How convenient that he’s probably just offered himself up to be this year’s sacrificial victim.

Another thing he has failed to believe was Mion’s story about a twin sister, but it turns she actually does have a more feminine twin who never goes to school and who she’s never gotten around to mentioning to any of her classmates. (Or, at any rate, there is someone who plays the part convincingly.) Still, Mion and Shion’s identities are very fluid. Shion gets to claim credit for bringing Keiichi food, and on Keiichi’s first visit to Angel Mort this episode, he addresses the girl he’s talking to as “Mion”, and she responds to the name.

What exactly is going on with the two of them is probably a moot point for Keiichi on this go-round now that he has more immediate concerns. But definitely something I expect we’ll learn more about in a future arc. 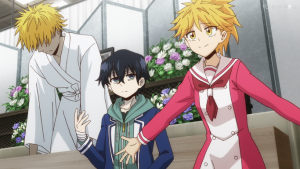 Talentless Nana #6 – After setting Inukai’s mind at ease, Nana gets a whole day or so to think she’s temporarily broken the chain of inconvenient potential witnesses who need to be murdered. Then someone turns out to be able to reanimate her last victim, forces her to spring into action, and winds up giving her the most precious gift of all: an enemy she can feel completely good about killing.

One crime is leading to another with such regularity that we can already start speculating how the next person who needs to be eliminated will get involved. Maybe they’ll have some way of replaying her little confession about being the serial killer. Or maybe Kyōya will find someone capable of surreptitiously performing autopsies.

First, though, she needs to survive her current confrontation. It was inevitable that at some point, someone was going to figure out that Nana was the serial killer in the students’ midst. Now she has to fight an insane necromancer and a super-strong zombie at the same time. She’s going to need all her wits to get out of this one.

Incidentally, the reference to a Buddhist priest rather than a Shinto one may sound odd, but it means nothing out of the ordinary. Shinto does not handle death well, seeing it as a source of gross impurity, and so it is customary for otherwise Shinto-following Japanese to have Buddhist funerals. 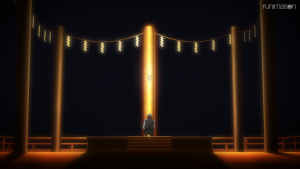 Akudama Drive #5 – With the Executioners out of the way and the Hacker choosing to try his luck in travelling the rest of the way to Kanto, the Akudama and their clients have an anticlimactic walk back to Kansai and a chance to rest. And a chance to try and figure out just who it is they’ve rescued.

The children not being very clear on what food is for means they are probably robots. With the highly advanced cybernetic implants the Akudama have available, fully synthetic people are the obvious next step. But then it becomes impossible to look at the boy’s old-fashioned school uniform and not think of Japan’s most famous robot boy, Tetsuwan Atom aka Astro Boy, who hails from the same era as that uniform. And given that this show wears its influences on its sleeve, it’s entirely possible that we are supposed to think of him.

The girl, meanwhile, is dressed as a Shinto priestess. Shinto imagery has cropped up quite a few times around Kanto now, most notably with the Boss’s interface to her overlords in Kanto. The whole thing is reminiscent of a temple, with Kanto playing the part of the deity. This would make the Shinkansen the messenger of the gods.

“Expo Park”, the Akudamas’ next destination, is probably this one in Osaka. 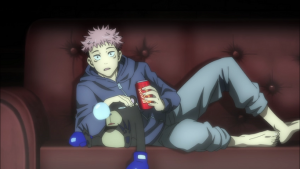 Jujutsu Kaisen #6 – Death is a tough opponent, but one that Yūji and Sukuna can eventually overcome together. With Yūji back on track and training, Gojō heads off on other errands, only to be confronted with powerful entities out to kill him.

Gojō is the real subject of this episode. We learn that he’s one of the most powerful occult sorcerers in existence. He could easily kill everyone he disagrees with in the ruling council he hates so much, but he’s figured out that that won’t bring lasting change. Since this is an action story, decades of quiet persuasion and consensus-building to change the system aren’t an option either, so that leaves getting control of the next generation of occultists and turning them into his own ideological army. What could possibly go wrong?

Yūji supposedly has the potential to be just as powerful as Gojō, which he displays by spontaneously waking up just before his autopsy. Though, since the doctor’s reaction is to complain about the paperwork, I guess this is the sort of thing that everyone is used to happening from time to time.

But, like any shōnen hero, Yūji needs to go through some rigorous training to realize his potential. Unlike most shōnen heroes, this means having to practice controlling his emotions. Usually emotions only come into the picture when the hero has to power through obstacles with the force of his burning spirit or somesuch. The part where Yūji gets punched when he screws up moves it back toward traditional shōnen territory, though. 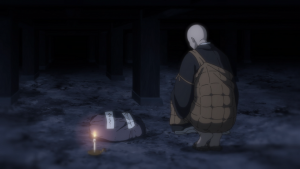 Yashahime: Princess Half-Demon #6 – Tōwa, Setsuna, and Moroha have accepted that they’re stuck as a team for the time being, so as a team they accept a commission to look into some disappearances out in the hinterlands. There they find a most un-Ulthar-like village full of demonic cats and a priest with a big problem.

The source of the whole problem turns out to have been Juan trying to be a good Buddhist, by praying that even the demon might eventually find the path to Nirvana. A little Buddhism at your funeral is fine, I guess the message is, just don’t go overboard.

But, the main purpose of this episode is to establish a special ability for Tōwa. Having a sword made from magical energy, she figures out that she can do magical things with it, like stab a demon without harming the body it’s possessing. Now we’ve been briefed on what all three heroines can do, it looks like it’s time to wrap around to the introduction and get the main plot moving.

Author’s Note: Last week I wrote about one of my favorite Star Wars characters, Admiral Motti played by Richard LeParmentier. It is with disappointment and sadness that I learned of his death this week. (04/16/13) Besides Star Wars, Richard appeared in Who Framed Roger Rabbit, the James Bond film Octopussy, and Superman II, as well […]

Quasar at edge of cosmic dawn is most distant yet – Futurity