Home Science Something for Halloween?

With the veil between realms fast approaching, I thought it might be a good idea to remind readers about our very own solar system. It’s a dark, cold place – chilling, you might say – that we’re only now beginning to appreciate harbors secrets well worth uncovering. Secrets that might help us discover more about the elusive “Planet X.”

If you remember, a few years back around Halloween, astronomers discovered an object they nicknamed “The Goblin.” A small world traveling a lonely path through the outer reaches of our cosmic neighborhood beyond the orbit of Neptune. Now, the thing about the Goblin is, its orbit fits into previous theories regarding a possible “Planet X” hiding far away in our solar system. And trick or treating aside, Goblin could help astronomers to find it.

The Goblin’s official name is 2015 TG387, and was discovered several years ago by a team of researchers using the Subaru telescope atop Mauna Kea in Hawaii. This special dwarf planet is about 190 miles in diameter, and is one of just a few objects whose elliptical orbits never take them closer to the sun than Neptune. Just two, 2012 VP113 and 90377 Sedna have a perihelion (that’s the point of an object’s orbit closest to the sun) farther out than The Goblin, and its orbit actually takes it far beyond them at its most distant point. The Goblin is estimated to reach some 2,300 Astronomical Units (AU) from the sun at maximum, putting it more than twice as far out as Sedna.
(Remember, the Earth is one AU from the Sun. So the Goblin is up to 2,300 times further from our parent star than we are.) 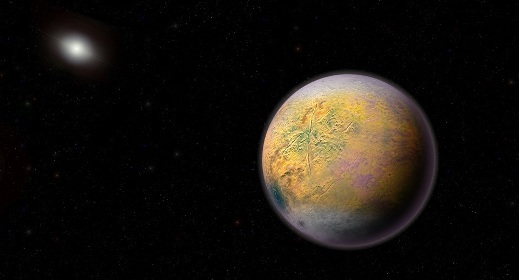 The vast distances The Goblin must navigate to complete an orbit means that it only travels around the Sun once every 40,000 years, so the team was lucky to find that tiny little world when they did. The simple reason being, the 190-mile-in-diameter object is only visible to us for less than one percent of its orbit! One percent! In itself, fantastic news, because it reinforces the idea that there could be many more objects like it in our solar system that, so far, have remained out of sight. 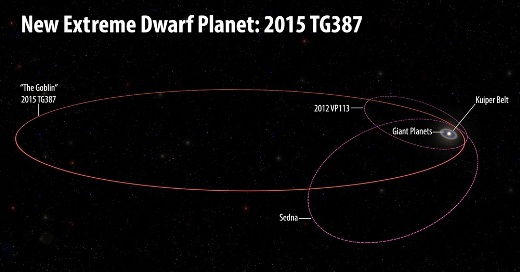 We know of only a handful of these so-called “Trans-Neptunian Objects,” out beyond Neptune’s orbit. And while none have been designated as planets, Eris and Pluto are nevertheless quite large, boasting diameters of well over 1,000 miles. Most follow eccentric paths that loop relatively near to the sun before taking them to the edge of the Kuiper Belt some 50 AU out and beyond. This makes them hard to find, but modern telescopes have begun to pick them out against the blackness of space. And the few that we do know of behave in a curious way. Though most orbit too far from the giant planets like Jupiter and Neptune to be influenced by their gravity, most distant objects seem to be moving in accordance with some powerful gravitational force in the outer solar system. In essence, their orbits are arranged in such a way that it seems like there’s another large planet tugging them into alignment. Called either “Planet X” or “Planet Nine,” this still-hypothetical world could very well remain undiscovered in much the same way The Goblin did.

Is chasing more Goblins a Trick or Treat?

That remains to be seen. However, what we can say is that Goblin’s trajectory fits exactly into current models and simulations of how distant objects should behave if “Planet X” actually did exist, further bolstering the notion that another massive world may be hiding somewhere within our solar system.

Yes, our cosmic neighborhood is still a largely unknown place, and astronomers will likely be discovering new objects there for years to come. Who knows what this Halloween might bring?