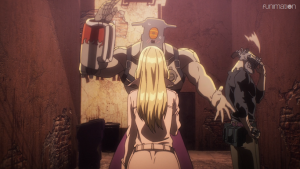 No Guns Life #18 – Inui’s life snaps back into noir mode as he is approached by a beautiful woman with a tragic past and a missing husband. Also very noir-y is that she’s smarter than she lets on. Somewhat less so is the ultimate revelation that her husband is a great big idiot who just needs to be saved from himself.

Chalk up another plot where a great deal of trouble could have been avoided if anybody in this marriage read relationship advice columns and understood that stuff like “I’m actually hiding my identity because a super-dangerous guy wants to kill me” really should be revealed to one’s life partner before it puts them in danger. Or, in this case, before you wind up being embarassed to discover that the guy died years ago.

Still, it does provide a hook to reintroduce Inui’s past in the military and his status as the guy who hunted down his own comrades when they went rogue, which should figure into the final confrontation somehow. Next, maybe he can get around to asking why Tetsurō got away from Spitzbergen so easily and what he’s doing in that fresh new uniform with the rune-like collar studs. 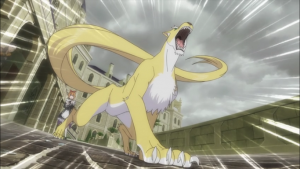 Re:ZERO -Starting Life in Another World- #31 – Subaru only pops back to the end of the first trial, so he has to hurry to make it back to Roswaal’s home base faster this time, with only Rem for backup. This time, he arrives soon enough to find everyone safe and sound, until suddenly they aren’t and there’s a lot more than one bowel-obsessed assassin to deal with.

Subaru really snaps back to old habits under stress. All of a sudden he’s willing to entertain the idea of completing Echidna’s trial all by himself, regardless of how it undercuts Emilia. Suddenly he expects everyone to be on his side and is surprised when they disagree with him. (Though, Garfiel did support him before, so what originally happened to change his mind?)

Although this time through looks to end in disaster, Subaru has learned a little more to help him on the next repetition. Frederica has all but told him and Rem how to take her and her mysterious obligation out of the equation. He knows what her connection to Sanctuary is. And he’s survived long enough that he can give Beatrice Roswaal’s message. 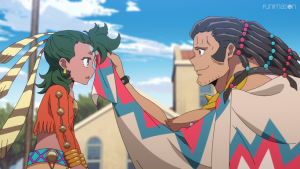 Appare-Ranman! #7 – After surviving the ambush at Death Valley and getting towed across most of Nevada, Team Appare makes it to the supply stop at Ely just in time for Hototo to get his moment to confront Gil the Butcher. But not only does the man in the Vader-sounding mask turn out to not be his father, he isn’t even Gil.

Hototo hasn’t completely lost his chance at revenge, though. By the number of dead people in the preview of the next episode, one gathers that the real Gil the Butcher may be about to turn up and let everyone know what he thinks of people impersonating him. The question is whether Kosame’s inevitable talk about seeing his mother murdered before his eyes will come before or after Hototo gets another attempt at futile revenge. 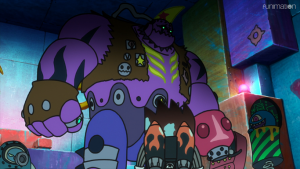 Deca-Dence #6 – While Natsume gets to enjoy some quiet time, Kaburagi is sent off to experience the delights of cyborg prison: terrible food, endless degrading work, and of course the gangs. Though he lucks out on that last point, because it turns out the gang boss is his old gamer buddy who also got sent down for cheating.

Kaburagi gets to return to the game as a new character. So what precisely does that mean? The Gears appear to have organic bodies, but I doubt any of the cyborg gamers wants to spend a ton of playing time grinding their way through childhood. But, well, there is a ready source of grown organic bodies right there. That would explain the need to keep the Recovery Agents hitting their quotas. It’s not just that the humans are failing to serve the system, they’re needed to serve it in another way.

That brings up the possibility that Kaburagi’s new avatar could be someone Natsume knows. Either one of her friends could suddenly get collected by a Recovery Agent, or her one conveniently dead comrade could be repurposed. I fervently hope that the whole reason for making Mundy butch wasn’t so that she could be rebooted as a terrible analogy for being trans.