In this week’s viewing: The last of the summer premieres, plus the return of a cyborg friend and [BIG SPOILERS] 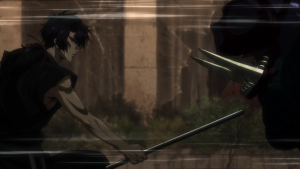 Gibiate premiere – One moment, a samurai and a shinobi are being rowed off to a lonely exile after falling out of favor during Japan’s wars of reunification in the late 1500s. The next, they find themselves in a desolate 21st-century Tokyo, inhabited by only a few scattered survivors of a raging pandemic. Only this one turns people into monsters.

The disease in question sticks very close to the usual laws of sf plagues. It hits everyone at the same strength and with the same progression of symptoms, it has a rapid onset, and it’s easy to tell if people have been exposed or not. The underlying explanation of how it works is a stew of buzzwords smashed together in the hope that they make some kind of sense. The time travel event is completely unexplained, but the opening credits suggest that a whole lot of other people from the past are going to be popping in to fight monsters.

The big selling point for Gibiate was that the character designs were created by famous artist Amano Yoshitaka. They look okay. They are the high point of this show, because everything else about it is terrible. The animation is even more limited than typical for anime, the story has to lean on making everyone unbelievably credulous about the time-travel thing to keep things moving, and the characters are all forgettable. 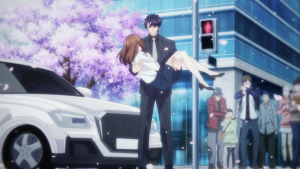 Mr. Love: Queen’s Choice premiere – A young woman is struggling to save the TV show her dad used to make until his untimely death. In the course of one day, she meets a prospective high-profile guest, cultivates a useful new scientific contact, discovers that they’re losing their only sponsor, and has a couple of weird encounters involving teleportation and frozen time.

Sign #1 that this is adapted from an otome game (a game with a strong romance element, aimed at young women): The heroine has no name and the vaguest of personalities, so that the viewers can project themselves onto her. (Literally, no name. She’s named in the credits as “Watashi”, the first-person pronoun most women would use.) Sign #2: Everything is secondary to getting her to cross paths with as many potential love interests as possible as quickly as possible.

As an otome game adaptation, Mr. Love does a reasonable job. It takes care of the meet-cutes for three of its four hot dudes and has the fourth one lined up for the next episode. None of them are outright abusive, though one of them looks like he’s going to be kind of a jerk at first, until he warms up to the heroine. If you’re up for some by-the-numbers romance, you could certainly do worse. 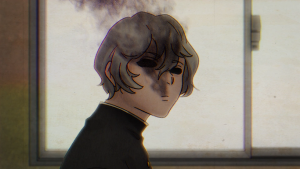 Ninja Collection premiere – A student looks on in horror as a dark mist invades his classroom and swallows up his classmates. But then everything is fine again, and it was all a dream… or was it?

This will be a story told in four-minute episodes, so there’s only enough room to go “look, a scary thing!” and then give you a glimpse of one of the main characters. As this is a spinoff of another show, I presume that fans of the franchise have seen what they were eagerly awaiting.

And that’s it for the premieres, time to go back to weekly commenting. I’ll tell you here, before the spoilers start, that Re:ZERO and No Guns Life are making it back into the lineup, and that Deca-Dence has earned itself a place. That leaves room to bring Appare-Ranman! back in when new material starts showing up next week.

Seriously, some big stuff happened with Deca-Dence this week, so if you were waiting to see my comments about it before committing to watching it, I’ll just tell you now that it’s great. Don’t scroll to the bottom of this post until you’ve watched episode 2 for yourself. 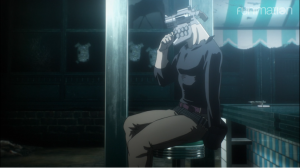 No Guns Life #13-14 – Looks like this started on time after all, Funimation’s interface just made it hard to find the second half.

So, we return to alternate cyberpunk noir Japan, and the further investigations of Inui Jūzo, ex-military cyborg investigator for hire. Despite Inui’s vow to not get involved with kids, he’s somehow wound up taking in Tetsurō, the fugitive son of the CEO of Berühren, the company which makes most of the cyborg technology. As of this last episode, he finally knows why the CEO would send his son off to be used as a test subject for a new experimental device: Tetsurō was secretly sending money to the anti-cyborg terrorist group, Spitzbergen. Or so Spitzbergen claims. Tetsurō conveniently doesn’t remember much of his life before the lab.

Meanwhile, Victor Steinberg, the ostensible head of Spitzbergen, is the big brother of Inui’s engineer buddy, Mary. The new information here is that Victor also was one of the mechanics working with the Gun Slave Units, Inui’s cyborg type, during the war.

In addition to all those connections, Inui is now in possession of the only copy of an incriminating recording admitting that one of Japan’s heroes during the war was involved in a war crime. Everyone is lined up against him— Berühren, Spitzbergen, and the government. Can one humble gumshoe survive all this and save his friends? I hope so, but with most of a season yet to go, there’s a lot of room for things to get worse before they get better. 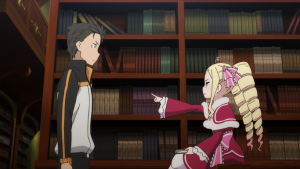 Re:ZERO-Starting Life in Another World- #27 – Intending to meet up with the rest of the gang, Subaru, Emilia, and Otto instead find a nearly deserted mansion whose inhabitants are only willing to drop the most cryptic hints about what’s going on. Soon they’re off again to find the mysterious sanctuary where their answers await, apparently in the form of a new villain.

Now, here’s the Subaru that viewers have come to know and love and cringe at: the one who has to be told “I am not your convenient tool”, who forgot to ask where the Sanctuary actually was, and who blunders into the trap that appears to have been intended as a new test for Emilia. This is the Subaru who dies from his own stupidity more than from any other cause.

But, before he dies again, I guess we’ll be learning about his (or Emilia’s) new nemesis, the witch Echidna, what she has in store for them. Nothing nice, it appears. 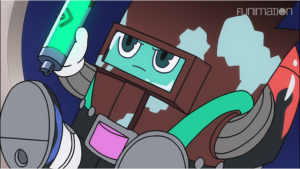 Deca-Dence #2 – As teased last week, we see that the humans are living in deep ignorance of their situation, that the real driver of events is in robot land, and that Kaburagi has much more to his past than he’s been letting on. But the curtain has been whipped back more quickly and thoroughly than usual for this kind of story, and there’s a lot to take in.

The ultimate purpose of everything appears to be the collection of oxyone. How the Earth comes to be populated with monsters whose blood conveniently works as robot fuel is yet to be explained, but that is what their entire society exists to do. The gamification of the hunt, the control of the humans, it’s all to collect the fuel.

Humans are NPCs in this game, just part of the machinery that does the less glamorous work of keeping the monster-processing going. It’s odd that their jobs can’t be fully mechanized, but it seems like there’s something keeping any of the robots from travelling physically to where the Deca-Dence is roaming. Maybe they’re living in a virtual world, so that a stock of physical bodies has to be maintained somehow, and the bots can’t be bothered with individual control of those bodies for the boring stuff like repair and butchering?

On the side, Deca-Dence is taking potshots at the Japanese employment ideal of working for one corporation until a planned retirement date. This is less and less the reality of modern Japan, but it persists as something that workers are supposed to aspire to. The organization of the robot society as a company and the scrapping date that every robot is headed for could not be any clearer.

In this week’s viewing: It’s that late-season moment when the plot cards are all on the table and fisticuffs break out in all directions!