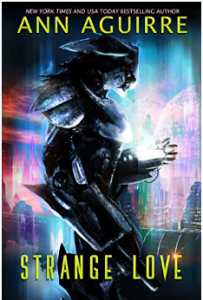 I’ve been a fan of New York Times and USA Today Best Selling Author Ann Aguirre for a long time and I usually associate her with dark and gritty science fiction such as the Sirantha Jax series and the Dred Chronicles. There were romantic elements and romance in her previous books but the news that she was writing a fullout science fiction romance really caught my attention. I couldn’t wait to download Strange Love: An Alien Abduction Romance (Galactic Love Book 1) to my e-reader.

I love this book. I read it in one sitting. Now, I’m not usually a fan of the “extremely alien male” hero in my romances but Ms. Aguirre had me from the very beginning with Zylar. He was a believable person, if alien, and I grew very fond of him. (And the bedroom scenes were hot, let me add.)

I was very excited to have a chance to interview her about aspects of this book!

Zylar of Kith B’alak is a four-time loser in the annual Choosing. If he fails to find a nest guardian this time, he’ll lose his chance to have a mate for all time. Desperation drives him to try a matching service but due to a freak solar flare and a severely malfunctioning ship AI, things go way off course. This ‘human being’ is not the Tiralan match he was looking for.

Beryl Bowman’s mother always said she’d never get married. She should have added a rider about the husband being human. Who would have ever thought that working at the Sunshine Angel daycare center would offer such interstellar prestige? She doesn’t know what the hell’s going on, but a new life awaits on Barath Colony, where she can have any alien bachelor she wants.

They agree to join the Choosing together, but love is about to get seriously strange.

Veronica Scott for AMAZING STORIES MAGAZINE: What were your three major influences or inspirations when writing Strange Love?

AA: Since I was trying to create something different and fun, I’m not sure if there were inspirations or influences per se. That said, I always thought that old SF movie ‘Enemy Mine’ should have been a romance. And when I played Mass Effect, I had a huge crush on Garrus Vakarian. I’ve even written steamy fanfiction about him. I love Beauty and the Beast, and I’m disappointed when he turns into a prince at the end. Why can’t Beast find love as he is? In Star Wars: The Old Republic, I wanted to romance Khem Val, the force-devouring monster who slays for you. You could say I have a major jones for scary-seeming individuals with exteriors masking their sweet and tender souls. Like Alyssa Cole, I’ve even thought that Alien vs Predator was sort of a love story. Check this article out!   I agree with everything Alyssa says there, and we had a great conversation about it, along with some other writers, after I finished Strange Love. (I put in bold the things that have been swirling around my psyche for years, and that’s more than three. Oops!) Anyway, lots of things went into the smelting pot before Strange Love emerged.

VS for ASM.: You’ve touched on many of my favorites there for sure.  No wonder I enjoyed the book so much! How did you go about developing Zylar’s physical appearance?

AA: He’s definitely inspired by Garrus Vakarian in Mass Effect, but he’s not a Turian with the numbers filed off. Turians don’t have spines or neck ruffs. Zylar is sort of part reptile, part insect in my imagination, like a mix of a bipedal komodo dragon mixed with a praying mantis, with alien coloration. If you’re curious about my inspiration for alien junk, that started here. It’s an interesting read and what I learned definitely informed alien sex organs and practices.

VS for ASM.:What do you think the appeal of non-humanoid heroes is to science fiction romance readers?

AA: I can’t speak for other people, but I was craving truly alien characters. Inhuman. That’s why I wrote this story. It’s easy to find aliens who basically look like humans, only they’re blue, or they have horns, but the sex organs are compatible. So for me, the appeal is reading about how love finds a way. I would suspect that the same is true for other readers.

VS for ASM.: Since this book includes a wonderful canine character (no spoilers from me), do you have a pet who keeps you company while writing? Or who served as inspiration? We’d love a photo if so….

AA: Of course! Her name is Dixie, and she’s a very good girl. Pictured here! She’s a seven year old mini dachshund who’s my heart and my shadow. She follows me all day, snuggles beside me as I write, although she really prefers to sit on my lap. I wanted a snuggle pup and I absolutely got one. Snaps is one of my favorite characters that I’ve ever written, and I’m so thrilled that readers love him as much as I do.

VS for ASM.: I definitely loved Snaps and I’m normally a cat person. He’s so much fun and important to the book. Will we see Zylar and Beryl again or will the series focus on other unusual couples going forward?

AA: Yes. I’m excited to announce that I will definitely be writing a second book in the series. Book two in the Galactic Love series is entitled Love Code, and it will be about Helix, the AI featured in Strange Love. I’ll write it as a serial, just like the first, for newsletter subscribers to read throughout 2020, but for those who prefer it in book form, it will be available for purchase in January 2021.

VS for ASM.: I’m glad to hear Helix is up next in the series. I felt there was plenty of room for him to have his own story. Is there a TV show you’ve recently binge watched and what do you like about it?

AA: I’m currently bingeing a bunch of DC shows. I resisted for a long time, but they’re so campy and fun. We started with ‘Legends of Tomorrow’ and got pulled backward into the vortex so now we’re also watching ‘Arrow’, ‘Flash’, and probably ‘Supergirl’ at some point. The shows are very cracky, and I love how they do crossover stuff. I’m also a huge fan of the reunion between Wentworth Miller and Dominic Purcell. 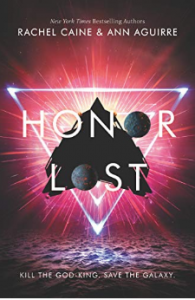 AA: I have a lot going on. My next release is Honor Lost, the third and final installment of the Honors series that I co-wrote with Rachel Caine. That’s a YA SF project about two girls having adventures in space, saving the galaxy, falling in love, and oh, they’re also having a poly relationship with the sentient space whale they live inside. That’s out Feb 11, and I think there would be a LOT of crossover appeal for those who enjoyed Strange Love.

Currently I’m wrapping up The War Priest, the much anticipated fifth book in my Ars Numina series. It’s about a very cranky bear shifter who’s also a monk, and the sunshine torch-singing cat shifter who falls in love with him at first sight.

Readers are really excited because ‘grumpy one soft for the sunshine one’ is a hugely popular trope. I can’t wait for everyone to read it! 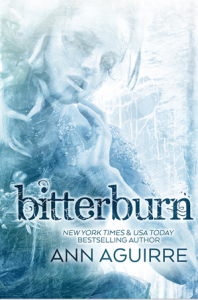 Then in October, I’m releasing a fantasy romance called Bitterburn. It’s about the Frost Knight trapped in a cursed castle and the feisty maiden who refuses to be sacrificed as tribute. Instead of killing each other, they’ll fall in love, naturally. This is my version of Beauty and the Beast.

VS for ASM.: Can’t wait for any and all of these titles but especially the Beauty and the Beast tale. What’s on your To Be Read List?

AA: I have some great books queued up!

A Cowboy to Remember by Rebekah Weatherspoon

The next 10 books I’ll read on my Kindle (in no particular order):

A Promise Kept by Mallery Malone

The Ten Thousand Doors of January by Alix E Harrow

The Right Swipe by Alisha Rai

The Affiliate by KA Linde

Empire of Sand by Tasha Suri

For more about Ann Aguirre and her books go to http://www.annaguirre.com/

MIchael explains how marketing your book is like a Presidential hopeful going to the down dump to drum up support.