In this week’s viewing: No Guns Life tears down a hero, Special 7 examines the magical parts trade, and more!

A quick programming note: Due to holiday travel, the usual simulcast commentary will not be available next week. But this column will still appear, as I’ve got something else stored up to talk about. 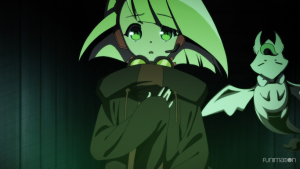 Special 7: Special Crime Investigation Unit #8 – Homonculus hearts are a hot item on the black market, due to their alleged medicinal powers, so Bellemer gets snatched off the street for a hasty operation. Unfortunately for the kidnappers, a ninja and a fire lizard are a lot more than they can handle.

Bellemer is never in that much danger in retrospect, and the heart smugglers don’t seem to be connected to the larger plot, so this episode mainly serves as an illustration of the capabilities of her and the boss’s “drone”. The fire lizard is enough of a technological construct to do near-field communication payments, but it also lets the boss be present in a literal enough sense that magic is definitely involved. That part is something that’s being hidden even from the rest of the team, as the boss even forges a message to make it sound like it’s Bellemer sending it. Which the team finds believable because, as we see, Bellemer does take that ninja title seriously.

One aspect of the mystery this week probably worked better for Japanese viewers than foreign ones. It was probably obvious to many of you that the “room” Bellemer was trapped in was the exact size and shape of a shipping container. Only in a place as pressed for space as Tokyo would it be plausible that it was just a room in a building somewhere. 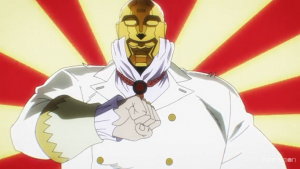 No Guns Life #7 – Inui, Kronen, and Japan’s #1 war hero combine to take down Gondry. Even better, now that Gondry is out in the open, he can be asked to give evidence about a horrifying incident during the war. Except, it turns out not everyone is in agreement about that being a good thing.

Mega Armed is curiously concerned about the adoption rate of cyberneticization. Berühren’s motives are obvious— more people with implants means more profits and also more people they can backdoor with Harmony. But the war hero doesn’t seem to be worried about losing his own personal reputation, so what’s his angle?

Speaking of the war, No Guns Life looks like it’s trying to evoke the post-World War II period in Japan. It’s not the actual postwar period, because, as discussed last week, the 1960s and at least part of the 1970s are in the past. But it’s going for a similar feeling, and along with that, the latest war is getting some parallels with WWII.

A common narrative about WWII in Japan, outside of right-wing circles, is that the country and the emperor were hoodwinked by a small group of fanatical nationalists. In that context, anything which smacks of excessive patriotism or militarism should be taken as a warning sign. Like, say, that big ol’ shout-out to the rising sun flag appearing behind Mega Armed.

And in right-wing circles? Well, there are some who agree that sure, the war was a bad idea, but still look at it nostalgically as a time when all Japanese society was working toward a common purpose. A time of great harmony. Hmm… 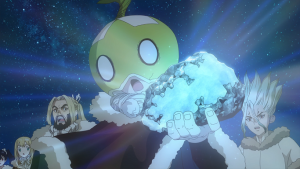 Dr. Stone #21 – With hydroelectric power, most of the village is freed up to make sure they can survive the winter and maybe even Tsukasa’s attack. Next on Senkū’s list is vacuum tubes. The vacuum part isn’t too hard, but now they need a stroke of luck to find a tough enough filament. Which of course they get.

Where other shōnen shows would have a training montage, Dr. Stone offers another round of pointing out that levelling your technology up takes hard work too. Even the serendipitous discovery of the right mineral isn’t as big a gift from the writer as you may think. Scheelite is actually mined in industrial quantities in Japan, and being associated with hydrothermal veins makes it reasonable that it would be found in a volcanically active area like the one Ishigami Village is located in.

Now all that stands between Senkū and his portable phones is gathering the mineral and extracting the tungsten. Oh, and surviving a trip into some potentially dangerous caves with Chrome and the guy who has a strong motive for killing them both. I’m sure this will go well. 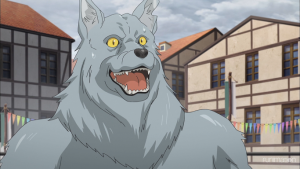 Kemono Michi: Rise Up #8 – In a nameless fantasy city, there is a man traumatized by his encounter with a serial harasser. But the arrival of a grand fighting tournament gives him the chance he’s been looking for to stand up, reclaim his courage, and defeat his nemesis! Except he loses.

The alleged joke at Wolfgang’s expense has been driven so far into the ground that I really think we’re supposed to be rooting against Genzō on this one. He’s done many things to improve the condition of innocent beastfolk, but this is one case where he really could stand to apologize for his actions.

As for the tournament itself, it’s interesting enough but, as Genzō says, it would be improved with some plotlines and drama. Well, letting Wolfgang in again would help with that. But the Macadamian Ogre and his incipient army of demihumans may take care of that too. 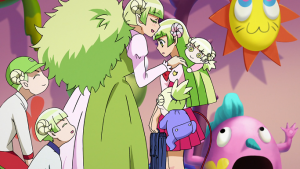 Welcome to Demon School! Iruma-kun #8 – Clara decides she needs to become hotter to keep Iruma’s attention, so she signs up for succubus classes, but in the end she learns an important lesson about just being herself. Or that’s how it was supposed to go, I think.

Instead, giving Clara that one last rating turns the message into one about girls being measured exclusively in terms of sexual attractiveness. When she regained her confidence and feelings of self-worth, there was an opening there to let impressionable young viewers know that that was a good thing in and of itself. Nope, it had to go for “and now she’s becoming hot!”.

Also, we really, really did not need that line about how babies have nonzero sexiness.

But this episode is not a total loss, because we did meet Clara’s family, and what a lovable bunch they are. I wouldn’t mind seeing more of them.

As Ant-Man and the Wasp proved once again, I find it a lot easier to object to the Marvel superhero movies in principle than I do in practice. In fact, looking back at some of my previous contributions to Amazing Stories, I see myself repeatedly grumbling about the preponderance of franchise movies – […]

Crossroads: Is this a Kissing Book? SFF’s Relationship with Romance