While plenty of books cozy up with multiple genres (urban fantasy in particular likes to blend the lines of mystery/fantasy/romance elements), there are very few—if any—that successfully combine as many as G. L. Carriger’s The 5th Gender, a cozy mystery science fiction and queer romantic comedy with a healthy dose of social commentary. That Carriger decided to combine all of these is an epic undertaking, but that she succeeded not only in creating something entertaining, but also powerful, is a true delight.

The 5th Gender, the first installment in the planned Tinkered Stars Mystery series, begins with a great deal of silliness. We meet Tristol, a lavender galoi alien with prehensile hair, takes on the challenge of cat sitting for human friends, totally distracted by his human crush, Detective Drey Hastion. Drey is on the security force for the space station where they both live, and while they run into each other frequently, Drey tries to avoid Tristol—because Drey is just as attracted to Tristol as Tristol is to him. 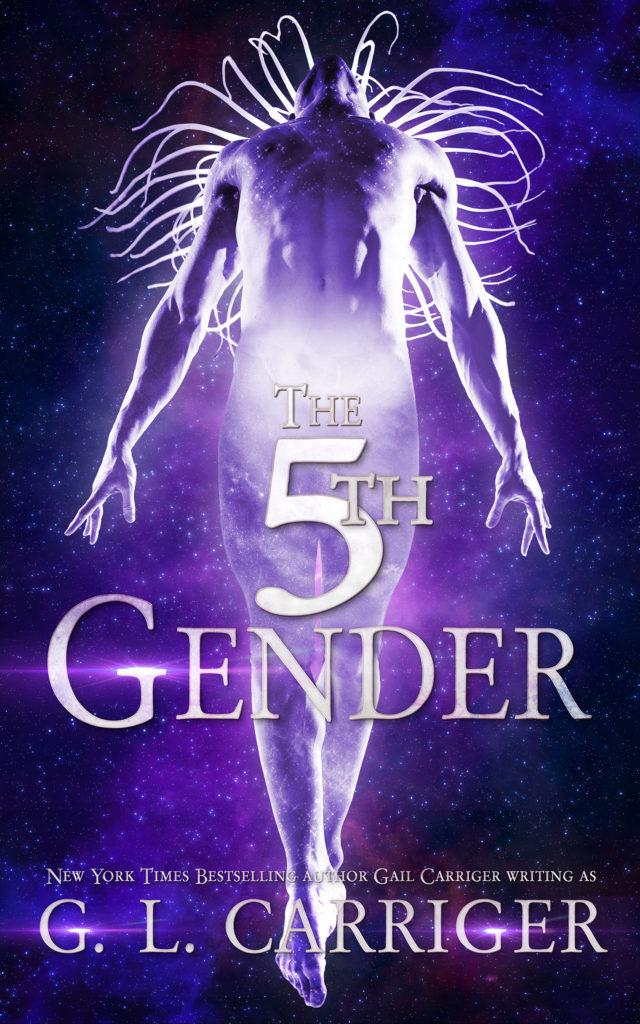 Unfortunately, the galoi have a reputation for being promiscuous, and Drey knows he’s a one-man type of guy. But, taking a page from category romance, Carriger heats up their attraction (and relationship) reasonably quickly in the early pages, while also introducing a number of world-building elements about the galoi, other aliens, and the future of humanity.

Tristol’s people have five genders and a very codified society that dictates the roles of these genders. Those who cannot conform to the expectations of society become zyga, or exiles, never able to return to their home planet or live among their very social people. The zyga are the only galoi that live among aliens; Tristol is one of these, and has come to terms with what it means to be a galoi who is no longer recognized as a person by his own species.

Though the codified society might seem heavy, it’s introduced in such a light and frequently humorous way that it never interrupts the tone of the story, not even when a galoi ship contacts the space station, requesting the services of a detective. Let the mystery begin…

There has been an intentional death on the ship—the galoi have no word for murder; they are long-lived and not terribly fertile, so the idea of killing galoi another intentionally is inconceivable. Drey, the station’s best trained and most experienced detective, is sent to investigate, and Tristol, as a non-person to the other galoi, goes along as a language and culture translator, completely ignored by the galoi due to his status.

The murder victim is the same gender as Tristol, and Tristol immediately feels a great empathy for the victim. Meanwhile, Drey has to navigate an alien culture and alien way of thinking while using detective skills honed among humans.

Switching back and forth between Tristol’s point of view and Drey’s, the narrative manages to capture Tristol’s completely alien, yet still human way of thinking. Galoi language and aesthetics are precise and laden with meaning, and Tristol gets terribly, humorously excited about the prospect of being able to dress Drey and buy socks for him.

Tristol frequently gets excited about simple things: his childlike delight in learning and experiencing something new, combined with the complete lack of sexual inhibitions of his people, create a sense of a character who is at once innocent and worldly, without every putting them in contrast. He’s an utterly likable protagonist, and his likability is an integral part of his character: everybody likes Tristol. It’s hard to imagine how his own people could even consider rejecting him.

Drey—a large, no-nonsense, dark-skinned and haired, human detective—intentionally acts gruff around Tristol to defend his own heart, and is a wonderful balance of outward strength and inward vulnerability. He is not quite the alpha-male so common in romance novels, though he shares some of their heroic characteristics; he is also, in his own words, “so… gay I shit sparkles,” and is a lover so open and giving that Tristol’s long-unrequited affection for him is immediately understandable.

Carriger plays a great deal with Tristol’s idea of aesthetics, in which having skin, hair, and eye-color all in the same palate, as close together as possible, is sheer beauty—an aesthetic that, with his all dark-toned features, Drey clearly fulfills.

read more: The City in the Middle of the Night Review

While some of these dynamics may play a little more comfortably for readers familiar with category romance novels (the sex scenes here are certainly as graphic and creative as category romances strive to be), the world-building has the depth that science fiction readers crave, and the cozy mystery plot, though frequently interrupted by the other two aspects, hangs together well, hitting all the right emotional points.

The humor becomes less frequent as the investigation comes to its rather serious conclusion, and as it becomes clear that “choosing” to become an exile rather than fulfilling the role society expects is not a choice at all. A one-off line about the way that humanity used to treat GLBTQIA+ teens, and the way that those teens suffered greater health risks than their peers due to societal stress, puts the conversation in blunt relief. For Tristol, becoming the person society meant for him to be was impossible. Exile wasn’t a choice, it was the only way for him to be himself, to live up to his potential.

read more: Space Operas to Look Forward to in 2019

In Carriger’s future, GLBTQIA+ teens no longer face those societal pressures. While there is a healthy gay club scene and, yes, many clubbers partake of one-night stands, gay culture is embraced and accepted. Human marriages are not limited to one man and one woman; a woman might have two or three husbands, and two men—even if one is human and one is not—can marry without censure.

By showing that freedom that humanity has embraced (though humans certainly still have hang-ups about sex, according to other species), and contrasting it with the rigidity of galoi society, Carriger reminds readers of how far modern humanity has to go in accepting a normal beyond cis-heterosexual. But, even for the galoi, she offers a hair of hope at the end, and a reminder that the power to change and become lies in the stories we tell each other. Even stories about adorable lavender aliens and their human crushes.

Gail Carriger’s The 5th Gender will be released on May 18th. You can order it via Amazon or your local independent bookstore.