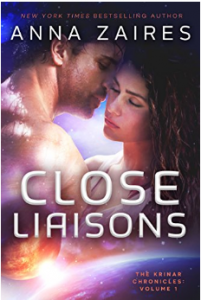 One of my favorite types of science fiction romance series is when an author with an established ‘world’ gives other authors the opportunity to write stories set in that universe. I always enjoy seeing how varied and creative the books can be!

(I always wished I could receive an invitation to ‘play’ in Andre Norton’s Witch World but of course I wasn’t a published author until long after she passed away. Not saying I’d have been invited even then of course but certainly not before I’d published anything!)

New York Times and USA Today Best Selling Author Anna Zaires created the Krinar series in 2014 and she and other authors have built on the foundation, including three new books set in Krinar World releasing this week. I thought it would be fun to ask Anna and her ‘World’ authors a few questions about the concept and the newest books.

Veronica Scott for Amazing Stories Magazine: Please give me a short ‘blurb’ for the world itself; i.e. what is the overall Krinar theme…

Anna: In the near future, humans are no longer the most advanced species in the universe. Earth is ruled by the Krinar, a mysterious race from another galaxy. From tender encounters in ancient Greece to addictive liaisons in modern-day Manhattan, humans find themselves intensely drawn to the dangerously possessive and inhumanly beautiful Krinar.

VS for ASM: What was your original spark behind the idea of the Krinar?

Close Liaisons, the first book in the Krinar universe, was my very first book! The story had been brewing in my head for decades, and one day, it just spilled out onto paper (or my computer screen, as the matter may be).

VS for ASM: Here’s the blurb for Close Liaisons: For college student Mia Stalis, the invaders—the beautiful, mysterious Krinar—are only stories on the news. Rumors about them abound: about their impossible strength and speed, their intentions toward Earth… their vampiric tendencies. None of it concerns her, though—until she catches Korum’s eye.

Powerful and terrifyingly seductive, the Krinar leader will stop at nothing to possess her. Helplessly drawn to her magnetic captor, Mia is plunged into the dangerous, secretive world of the Ks and forced to choose between truth and lies, her people and her lover… her freedom and her heart.

VS for ASM: What can readers expect in terms of more books to come?

Anna: We are always open to new writers joining our World, and are hoping to launch new books every year.

VS for ASM: Who does your very effective covers?

Anna: Most of our covers have been designed by the talented Najla Qamber! https://www.najlaqamberdesigns.com/

VS for ASM: Is there a Krinar World webpage or FB group where readers can learn more and join in discussions?

Anna: All Krinar World books can be found here: https://www.annazaires.com/book-series/krinar-world/ 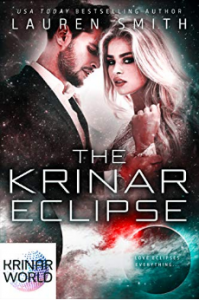 VS: And now on to the authors releasing the new books this week!

VS for AMS: What was the original ‘spark’ or idea that inspired your novel in the shared world?

Lauren: I always love a good forbidden romance and I recently watched that movie where Mandy Moore played the president’s daughter and fell for her secret service detail. I just loved the idea of what that would be like if she fell for an alien and how that would play out with the safety of earth on the line. (VS: ‘Chasing Liberty’)

Laura: I can’t help binging over and over three different shows: ‘The Office’, ‘Parks and Recreation’ and ‘Brooklyn 99’. All three shows are so funny and it’s the right kind of humor for me, not dark, just funny oddball to make me laugh and relax on a stressful day. 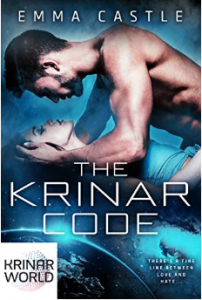 VS for AMS: What was the original ‘spark’ or idea that inspired your novel in the shared world? Emma: I love kickbutt heroines who still have a soft vulnerable side. I honestly think this book just came from my desire to write a character who wasn’t exactly a resistance fighter but she had two brothers who were and I thought it would be interesting to discuss what it means to resist and when and how someone should resist. There’s a subtle dialogue with the reader’s conscience within the story without the story losing its power and passion, to make the readers think a little about how the aliens may not be the bad guys after all even though they did invade earth.

Emma: ‘Supernatural’ and ‘Buffy the Vampire Slayer’. I’m not sure why but these two shows just draw me in and make me think about things a little differently. Plus they’re just fun! 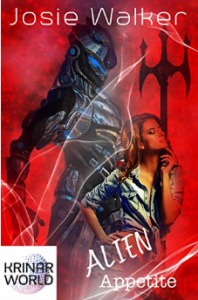 Josie Walker, Alien Appetite: These aliens just might be insatiable!

VS for AMS: What was the original ‘spark’ or idea that inspired your novel in the shared world?

Josie: This book is all about a savage new species of aliens called the Ro-heem. They’re covered in hard metal armor, with deadly weapons instead of hands. Tessa and Bocc-d’ar don’t speak the same language, but with chemistry like theirs, who needs words? My original daydream was a sort of King Kong sacrifice of the maiden, combined with the savagery of a sexy Conan the Barbarian. Maybe I just like the idea of a bunch of hot guys battling for me in an arena! Come on, who doesn’t love a hot, scantily clad, muscles rippling alien?

In my last book I posed the question: “What if the Krinar aren’t the only aliens?” Ideas exploded from there. The Krinar believe they are the strongest, most advanced beings in existence. But what will happen when they come face to face with this new threat? Anna created such a fun world, and it’s been a blast getting to play around in it. Hint, Hint, in book 4 I’m hoping to spark the flames between one of the female Krinar captives and one of my metal aliens—just because I sense so much tension there I can’t resist!

Josie: Sometimes I think I write just so that I have the excuse to binge watch reference movies during the day without guilt; haha! I can’t pick any one show, as I literally change what I’m watching based on what I’m writing. For this book I was inspired by the old romantic musical ‘Paint Your Wagon’ (crazy I know), ‘King Kong’ (1976 version), ‘Conan the Barbarian’ (I’m a loyal Arnold fan), and just about any violent action movie I could get my hands on!

VS: Next post I’ll be back to listing other selected new SFR releases!

Jupiter May Have Absorbed a Smaller Planet

Book Review: Across the Universe by Beth Revis