I read the news today, oh boy, about a lucky man who made a speech. Plus – wow – all kinds of stuff: Delany on Stonewall, scientists trying to open a portal to another realm, trademarks for authors, Datlow, Gerrold, Doug Smith, Convergence and doing accessibility right and so much more – you better get another cup of coffee and get comfy! This is going to be a RIDE!

SPECIAL NOTE:  Today marks what would be the 112th Birthday of Robert Anson Heinlein.

The Flinstones depicts a post-apocalyptic future

George R.R. Martin says ““The Internet is toxic in a way that the old fanzine culture and fandoms — comics fans, science fiction fans in those days – was not,”

Women Choosing Not to Have Kids Because. Climate Change

Mount ToBeRead not tall enough?  You might have missed these  or these

Anyone else thinking ‘Starman Jones’? 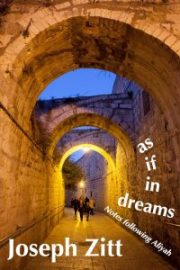 New Release:  as if in dreams – notes following Aliyah, by Joseph Zitt is now available for order.  Joe is a long time friend and fan.  as if in dreams was built up from a series of daily Facebook posts and focuses on his move to Israel.  ” Moving to Israel, an American Jew finds both an alternate reality and an eternal home…Vivid, precise, and often hilarious, these entrancing vignettes embody how what might seem like nothing special appears to a poet’s eye.”  The writing is lyrical and reveals uncommon powers of observation.  While not genre, this is an extraordinary bit of writing and well worth the reader’s time.

Because Harlan, we still love ya!

Gerrold’s The Man Who Folded Himself gets a bit unfolded in this Tor critique (BTW:  new Gerrold story in the latest issue of Amazing Stories)

Mike Brotherton’s TED Talk – The Synergies of Science and Science Fiction:  “Science Fiction plays with the net up.”  (Gasp!  “Star Wars is not science fiction.”)

Jack Clemons, our somewhat captive steely-eyed missile man, spoke at the Delaware Public Archives about what it was like to land a man on the Moon

The Greatest Sci Fi Writers of All Time?  Ummm, some of them might take offense at being called a “sci fi writer”….

Asteroid worth untold trillions of dollars could collapse world’s economy

We Also Heard From

Author Douglas Smith who is offering his story Going Down to Lucky Town for member’s free read;  also, a discount for all works to VIP members

My Boskone 55 panels and appearances.