The art of archaeology is like detective work, except the clues are often from a time long forgotten. Its traveling back in time to solve a mystery. The perfect vehicle for science fiction. 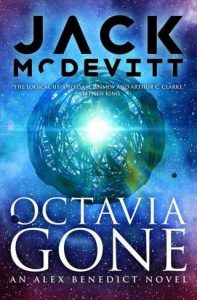 Released this week from Saga Press (Simon and Schuster), Octavia Gone by award winning author Jack McDevitt opens with the disappearance of a research station with four crew members which was last reported orbiting a black hole. The eighth book in the popular Alex Benedict series (A Talent for War, Polaris, Seeker, The Devil’s Eye, Echo, Firebird, Coming Home), familiar readers get to once again follow the business operations of antiquities dealer and his assistant/pilot Chase Kolpath as they puzzle together evidence in the mysterious disappearance.

Alex’s uncle Gabe returns after being lost in space for over a decade, but time aboard the ship elapsed only a few weeks. In addition to dealing with his life awkwardly warping ahead eleven years, Gabe believes he is in position of an artifact that may lead to answers to the missing Octavia station. With the help of Alex and Chase, the search for answers launches into a fast-paced mystery with galactic proportions.

Detective work often weighs heavy on the physical evidence, but more often than not the case is solved when the investigator is open to sociological elements as well. McDevitt takes this evolving dynamic to a new level with the notion that some artificial intelligence could be hiding a secret and influence humanity’s perception of AI’s.

Though this story ties into some of the elements following Coming Home, it is a stand-alone story with just enough backstory to keep the new reader involved. If this is your first introduction to McDevitt’s world of galactic archaeology, it is a great jumping in point. But don’t let that stop you from going back and discovering the other books in the series. Besides, though this edition closes with a satisfying conclusion, the author does dangle a few questions that hint our heroes might appear in a future novel.

Octavia Gone is a blueprint for mystery writers. Smart characters not only looking for answers, but growing from what they discover is satisfying, even if we might not like what they find. Jack McDevitt’s ability to put heroic people in remarkable situations without stretching the believability factor is what drives the plot and allows the reader to become invested in the characters. The science is sound, stretched just enough to play an important role but not too crazy to be distracting. Altogether, it is an enjoyable read that goes by quick. The future is bright…especially if we get to hear more from Alex and Chase.