Filming continues in Georgia and we’ve got “exclusive” pics from Google Earth; plus a note about the daily schedule

ETA:  The daily postings, which regularly appear by 11 am EST may be on a somewhat irregular schedule through mid-February.  They’ll get posted, it’s just not certain that they will be by 11 am.

No editorial this week as weather and personal matters are taking up our time.

Instead, check out this latest report on the TV show:

A new filming project is sweeping through Morgan County this week for a reboot television series of Steven Spielberg’s sci-fi/horror “Amazing Stories,” with shooting locations in Rutledge, Bostwick and right outside of Madison. (More at the link.)

Here’s a bird’s eye view of the “Rutledge’s iconic gazebo underwent a paint job for the filming, and on Wednesday, Jan. 16, crews began covering the intersection of Fairplay Road and Main Street with dirt.” area, and, serendipity, Google may have been doing street views while they were actually repainting the Gazebo – 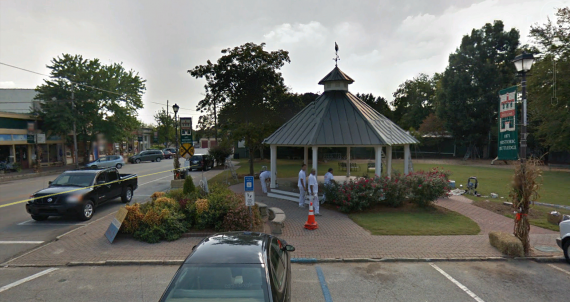