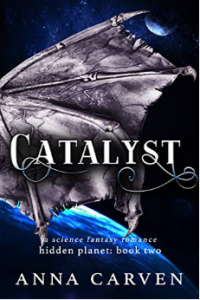 Happy New Year! This post is a collection of  my thoughts on the year ahead for science fiction romance plus a few new and especially notable SFR releases.

For 2019, my personal watch word is going to be ‘mindful’. Yes, I do have a strategic plan and specific goals and I revised that in December. (Learned to do strategic planning in my long career at NASA/JPL before becoming a fulltime author and the habit stuck with me.) I update my plan every December for the coming year, besides looking at it once a quarter to check on my progress. The choice of one word, however, is to ask myself to focus on whether the activities I’m spending time on are really advancing what I’d said were my priorities for the year, and if not, to evaluate if I need to revise a goal to respond to a new development. OR am I simply indulging myself in too much time on social media, for example! Yes, I connect with readers there but I also have a tendency to dive into rabbit holes of discussion or research.

Publishing is constantly evolving and sudden change is inevitable, especially in the independent publishing arena, so I believe an author needs to stay nimble and adaptable. Being a successful author is a long game and takes time and fortitude to build a solid backlist and a readership.

I released seven books in 2018, all SFR, and hope to do the same this year but perhaps squeeze in one or two more titles. I’ve committed to my readers to write at least one of my ancient Egyptian paranormal romances this year, while continuing to add new adventures to my award winning, bestselling Badari Warrior  SFR series. I also have a fantasy world for which I’m dying to write new stories, but unfortunately I can only work on one book at a time, according to my Muse, and my writing speed works out to a book about every other month. A bit more if I avoid that social media black hole and buckle down on the writing!

One significant change for me is that USA Today shut down the Happy Ever After blog as of December 31st, where I wrote the SciFi Encounters column, focusing primarily on SFR. I plan to bring a bit of content here in 2019 I would have otherwise covered for USAT, with some author interviews and maybe a few ‘topic’ posts, but overall the loss of the HEA platform means more time for me to devote to writing novels. I always try to find the most positive spin, can you tell?

A few trends I foresee for SFR in general  in 2019 – the romance subgenre will continue to be popular with readers. I don’t see any loss of enthusiasm in the various places and groups where I interact with the community.

Cyborgs will continue to be a popular trope for the hero (and sometimes for the heroine as well. Starting to see a few female cyborgs.).

Dragons and dragon shifters are still popular but I think their momentum is slowing a bit. Some authors have been trying to switch to griffins but I haven’t seen that catch on.

There was something of a move to writing standard ‘Harlequin type’ plots for SFR novels in 2018 – the billionaire dragon shifter alien’s secret nanny’s baby kinds of things. I think it seems like low hanging fruit to some authors, repurposing those plots, and readers do seem to enjoy the stories with a science fiction twist but again, I haven’t noticed a huge wave of best sellers along that line.

Colorful barbarians on various icy planets are still being written and enjoyed but that’s not a cutting edge trope any longer. Ruby Dixon published her first one in 2015, which really put energy into the concept. I wish I knew what was going to take its place!

Reverse harem (RH) is still selling well for romance in general. I haven’t seen too many SFR RH novels as yet though – most seem to be in the fantasy or paranormal genres and are definitely a hit in the Kindle Unlimited market.

Series continue to be the way to go, versus standalone novels. No cliffhangers, please. Or if you must have one, warn us in the book description!

Many authors who were early trail blazers in SFR and who had published traditionally are getting their rights back now to older novels and are updating and re-releasing those titles independently, which is exciting. I think many of the current readers have come to the genre in the last few years and may not have seen the older titles by popular authors (Susan Grant, Kim Knox et al) before.

Although there continued to be a weekly cornucopia of SFR new releases all through December, let me quickly highlight a few to close out this post.

Anna Carven kicked off a new series with Catalyst (hidden Planet Book 2): Stranded on a remote planet with no hope of escape.

Stuck in the unforgiving wilderness, where monsters hunt in the skies above.

No signal, no spacecraft, no translator.

Esania thought she and her people were escaping to the sanctuary planet of Torandor. Instead, she’s ended up on a wild, uncharted nightmare called Khira, where the violet-skinned savages who guard them are just as poisonous as the deadly flora and fauna.

And the pale-winged demon who’s just dropped from above might be the most dangerous of them all. 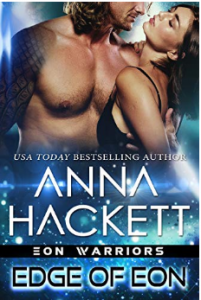 USA Today Best Selling author Anna Hackett also began a new series with Edge of Eon (Eon Warriors Book One): Sub-Captain Eve Traynor knows a suicide mission when she sees one. With deadly insectoid aliens threatening to invade Earth, the planet’s only chance of survival is to get the attention of the fierce Eon Warriors. But the Eon want nothing to do with Earth, and Eve wants nothing to do with abducting War Commander Davion Thann-Eon off his warship. But when Earth’s Space Corps threaten her sisters, Eve will do anything to keep them safe, even if it means she might not make it back.

War Commander Davion Thann-Eon is taking his first vacation in years. Dedicated to keeping the Eon Empire safe, he’s been born and bred to protect. But when he’s attacked and snatched off his very own warship, he is shocked to find himself face-to-face with a bold, tough little Terran warrior. One who both infuriates and intrigues him.

When their shuttle is attacked by the ravenous insectoid Kantos, Eve and Davion crash land on the terrifying hunter planet known as Hunter7. A planet designed to test a warrior to his limits. Now, the pair must work together to survive, caught between the planet and its dangers, the Kantos hunting them down, and their own incendiary attraction. 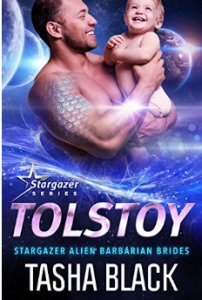 USA Today Best Selling author Tasha Black ventures into new series territory as well, with Tolstoy: Stargazer Alien Brides #1:  When space-pirate-in-training Anna Nilsson embarks on her first solo mission to plunder an abandoned luxury cruiser, she assumes she’ll be all alone aboard the big, empty ship. She’s hunting for treasure – the last thing she expects to find is a sinfully sexy alien who eyes her with a hunger that speaks of centuries of longing.

Leo’s ancient race has suffered greatly at the hands of the strangers who invaded their planet centuries ago, leaving the barbarians without a home world. When he awakes from stasis to the scent of a blood mate, he is stunned to discover the delectable creature is human. Being close to her sets his senses on fire, but he knows the attraction can only end in misery. What human could ever love a shape-shifting barbarian?

When a third occupant of the not-so-abandoned cruiser shows itself, the two realize they must work together if they want to get out alive.

Then they uncover a baby who just might be the priceless clone of a famous cultural icon, and things really start to get interesting… 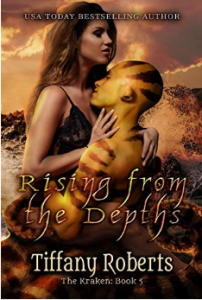 USA Today Best Selling author Tiffany Roberts continued the Kraken series with book six, Rising from the Depths:  Two years after a bloody battle nearly tore his people apart, Kronus finds himself plagued with guilt and without a place to truly call home. And when he saves a blue-eyed human from a razorback, his world is once again turned upside-down. Though he once opposed relations with her kind, he is undeniably drawn to Eva’s pain, loss, and inner strength. He will do anything to protect her — and to possess her.

Eva had a perfect life. But a few seconds of blood and terror took everything away. Left crippled and alone, she sinks deeper into despair every day — until the ochre kraken who saved her forces his way into her life. She wants nothing to do with the overbearing, gruff, and pushy Kronus…at least at first. With neither of them ready to let go of the past, how can they hope for a future together? 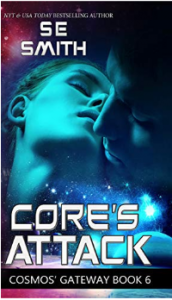 New York Times and USA Today Best Selling author SE Smith released Core’s Attack: Cosmos Gateway Book 6: Avery Lennox has been called many names, but bond mate was never one of them. Her position as Chief Security Officer for Cosmos Raines guarantees that her life will never be boring—especially after her genius boss decides to open a portal between Earth and Baade, a world filled with an annoying, male-dominated species called Prime—but after meeting one particular alien, Avery decides to pursue him through the portal.

The trip to another world was…indescribable, but it’s when she returns home that Avery is in the most danger. Someone else is as fascinated with Core as she is, and believes Avery is the perfect bait.

From the moment Core Ta’Duran met Avery, he was captivated by the human woman who shields herself with an icy demeanor and a gun. Avery knows he wants a lifetime with her, and even though she is fighting their bond, she still appears on his world with a tantalizing offer: three days together with no questions, no ties, and no regrets.

When he follows her back to Earth, instead of finding Avery, he discovers a menacing message left for him: agree to be hunted or Avery dies.

Can Avery and Core turn the tables on the ruthless killer who wants to display Core as a trophy in his private collection, or will Core lose the most crucial battle of his life?

Many more exciting new SFR releases to come in 2019 so stay tuned!

You can’t keep a good kerfuffle down! Notes on how to avoid starting a kerfuffle and related fuffle.

Against the Boycott of Ender’s Game