A novel, or even a short story, that retells a fairytale can open it up, subvert it, and turn those archetypes into more fully-realized characters.

I grew up with fairytales, and have wonderful memories of my Dad reading to me from collections of feminist fairy tales Tatterhood and The Maid of the North. Then, when I graduated to novel-length fantasy novels, I was thrilled to discover the works of Charles de Lint, which weave fairytales, Faeire, and mythology into their urban settings, as well as Ellen Datlow and Terry Windling’s collection of fairytale retellings, beginning with Snow White, Blood Red.

Fairytales are stories reduced to their elements, built on archetypes. A novel, or even a short story, that retells a fairytale can open it up, subvert it, and turn those archetypes into more fully-realized characters. Fairytales also have a certain logic, a “just so” quality, that lets authors take risks that would otherwise feel like deus ex machina—in a fairytale the youngest son of a youngest son will set out on a quest and if he is goodhearted he will encounter a being that gives him aid on his quest. He must be brave and true, and suffer greatly, and make the right sacrifices to come out all right in the end.

In the decades since then, fantasy that traces its roots to fairy tales has exploded. This fall brings some new entrees that look wonderful: 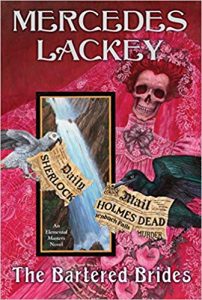 Mercedes Lackey began this fascinating series with The Fire Rose, set in Victorian-Era San Francisco, a retelling of Beauty and the Beast set in in a world with Elemental magic. In the rest of the series she moved the setting to England, created a world of intertwined families of Elemental magicians that negotiating various fairytale retellings. I can also particularly recommend Phoenix and Ashes, which is has a very moving depiction of the horror of WWI.

In The Bartered Brides, the 13th book in the series, Lackey brings her fairytale stories and Elemental magic to a serial murderer in London—after Sherlock Holmes and Moriarty have both departed, leaving vacuum among both detectives and perpetrators. These books are all stand-alones, linked by world and theme more than characters, so dive in wherever you want! 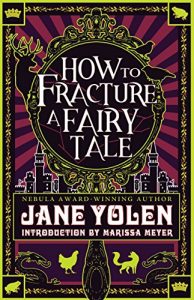 Jane Yolen has been fracturing fairytales for her whole career. I grew up with her Sleeping Ugly and she has had a long career in both adult and children’s book writing. Now she has come out with a new collection of fairytale retellings. According to the publisher:

Yolen breaks open the classics to reveal their crystalline secrets: a philosophical bridge that misses its troll, a spinner of straw as a falsely accused moneylender, the villainous wolf adjusting poorly to retirement. Each of these offerings features a new author note and original poem, illuminating tales that are old, new, and brilliantly refined.

She also includes an author note and poem with each tale. 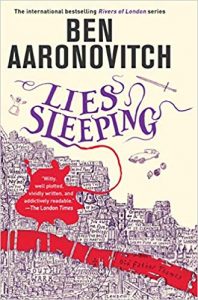 I devoured the first four Peter Grant books when I first discovered them, and am eagerly awaiting this latest addition to the series—number seven. Peter Grant is a detective and apprentice wizard in London, who frequently encounters creatures out of fairytales, legends, mythology and nightmares. There’s something about the atmosphere of this series that is very unlike any other urban fantasy I’ve ever read. For one thing, Aaronovich’s London feels incredibly true and lived-in, incorporating local mythology and mythology brought in by London’s immigrant population. The stakes are incredibly high, and characters encounter more than they can handle and break from it. Peter is usually in over his head, dealing with complicating emotions, but these books also often have a great deal of humor. I can’t wait for this next one! 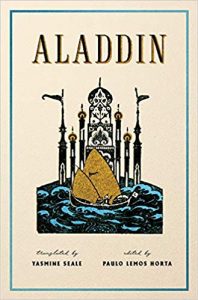 The Thousand and One Nights is the source for a huge number of fascinating folk and fairytales from the Middle East, and the story of Aladdin is one of the most famous of these. This new translation has been widely praised, and reveals more complexity in the tale than previous translations have.

What are your favorite fairytale retellings? What fantasy books are you looking forward to this fall?