We just received a good question from a subscriber:

What issue does my subscription begin with/will I receive the debut (Fall 2018) issue?

Believe it or not, there was a relatively noticable amount of back and forth here at the Amazing Geographically Distributed HQ on just that subject.

When you are a monthly publication, it’s pretty straight-forward and reasonable to make the assumption that if you subscribe in, say, January, your subscription will begin in February, or perhaps even with the January issue, absent information on the subject from the publisher (such as, subscriptions begin with the appropriate issue six weeks after our receipt of payment).

The frequency of publication (monthly, or even bi-weekly) pretty much renders it a non-question:  the pub comes out every month, your subscription will begin within a month plus processing time.

But when it comes to quarterly publications, well, there are questions.

Suppose the current issue just came out, you picked it up and immediately subscribed.  Do we make you wait nearly four months to begin your subscription, or do we begin it with the current issue that you may already have?

The other scenario of course is, you haven’t seen the current issue but learned of the magazine and subscribed, right after the current issue was released…do we make you wait three or four months or do we send you your first (current issue) immediately?

After that back and forth, we made the following decision:  we’ll let the subscriber decide.

I know, I know, a totally radical idea that is only an option owing to the intervention of high technologies.

An “options” selection has been added to the subscription page in the store which offers to start your subscription “with the current issue” or with “the next issue”.

Our current quarterly schedule is the following:

Releases are generally scheduled in the second half of the initial month (the Fall 2018 issue was released at Worldcon76, beginning on August 16th) and we anticipate this continuing; the Winter issue will be released in November, after the middle of the month.

In moving forward, therefore, if you are subscribing in January, the “current issue” would be the Winter 2018 issue, at least until January 15 of 2019.

Now rest assured, we’ll be announcing the release of a new issue here and elsewhere, so if you are in doubt, check the website.  If you remain in doubt, send us a query. 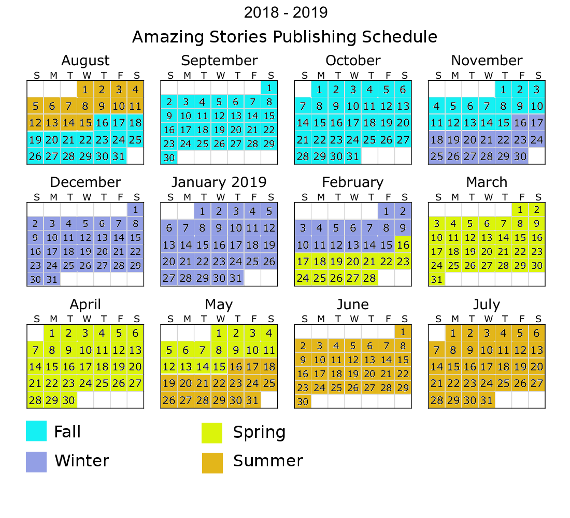