Sometimes, comics are bigger than the imagination they stir. Sometimes, a graphic novel comes along that is a lot more than just the words or pictures on the paper. And sometimes, it’s difficult to put a book down, even after the last page is turned. Sometime is now. 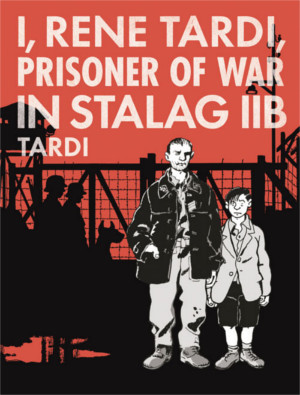 The graphic novel I, Rene Tardi, Prisoner of War in Stalag IIB by Jacques Tardi is a masterful work of art that tells an emotional story everyone needs to read, needs to experience, and undoubtedly will appreciate. Originally published in 2012 by Casterman Publishing, this is the first English translated edition from Fantagraphics, with the translation provided by Jenna Allen.

From classic works in the fantasy genre such as the volumes of The Extraordinary Adventures of Adéle Blanc to the popular steampunk adventure The Arctic Marauder, award winning French artist Jacques Tardi has provided some of the most stunning imagery the comic industry has experienced, some of which has even been adapted to film. But what many fans of Tardi have come to love and expect over the years is his raw and sometimes controversial antiwar vision statements. As much as many of us enjoy the skilled art of war as a backdrop for our favorite fantasy adventures, the truth of the raw macabre nature of war is downright haunting.

I, Rene Tardi, Prisoner of War in Stalag IIB is not fantasy. The author’s father experienced first-hand the hardships of detainment in Stalag IIB. This graphic novel is presented in a unique format with Jacques Tardi placing himself within the imagery and the dialog represents conversations between father and son as the elder Tardi Told remembers his experience.

Granted this book stirred a deeper emotional bond with myself than perhaps most as my own uncle, Doyle Annable and other Americans were also imprisoned at the very same camp, Stalag IIB. It truly is a small world, but with the staggering number of prisoner-of-war camps during World War II, this coincidence is an eye opener to the global immersion this war consumed.

A second English translated volume, which picks up where volume one left off, will be released in early 2019 by Fantagraphics. This edition follows Tardi’s harrowing adventures as he and fellow POW’s make the grueling trek eastward, with the hope of eventual freedom being their guiding light.

This is not fantasy. You can’t make this stuff up. As distressing as the subject matter may be, I, Rene Tardi, Prisoner of War in Stalag IIB is one of those rare books that will stir, teach, and leave you in admiration of those who endured what hopefully nobody else ever will. If you haven’t experienced Jacques Tardi’s other work, well, this book would be quite the jumping in point.